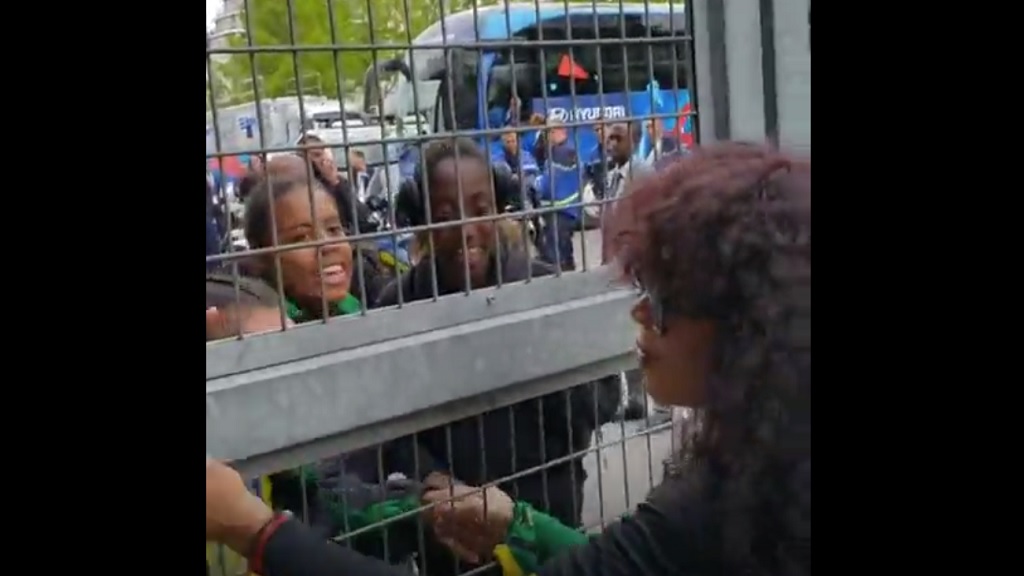 Reggae Girlz Ambassador, Cedella Marley, greeting the team members after their game against Brazil on Sunday through a fence at the stadium as a result of accreditation issues which she encountered.

Another blot is likely on the way in respect of the Jamaica Football Federation’s (JFF) recent history, following revelations in France on Sunday, that Reggae Girlz’ Ambassador, Cedella Marley, was not adequately provided for in terms of interacting with members of the team at the stadium after their World Cup debut against Brazil.

In a video obtained from the location, Marley is seen greeting the team after the opening match through a security gate at the stadium.

Indications are that inadequate or no accreditation was secured for Marley, who spearheaded much of the financial and motivational support for the Reggae Girlz’ journey to France, resulting in her being unable to meet the team members in a proper way at the venue.

The development followed a recent furore over flight arrangements for the Girlz to travel to Scotland for their final warm-up friendly international before the World Cup, with the team members travelling on two separate planes and arriving on different days for the engagement.

Amidst it all, a war of words broke out last week after a member of the Reggae Boyz team chastised the JFF for supposedly inadequate financial arrangements for, and preparation of, the team for major international engagements.

That was not the only remuneration issue to have hit the federation over recent times, as approaching the World Cup, members of the Reggae Girlz set-up, including the coaching staff, were reportedly at loggerheads over proposed contractual arrangements for the team members and coaching staff.