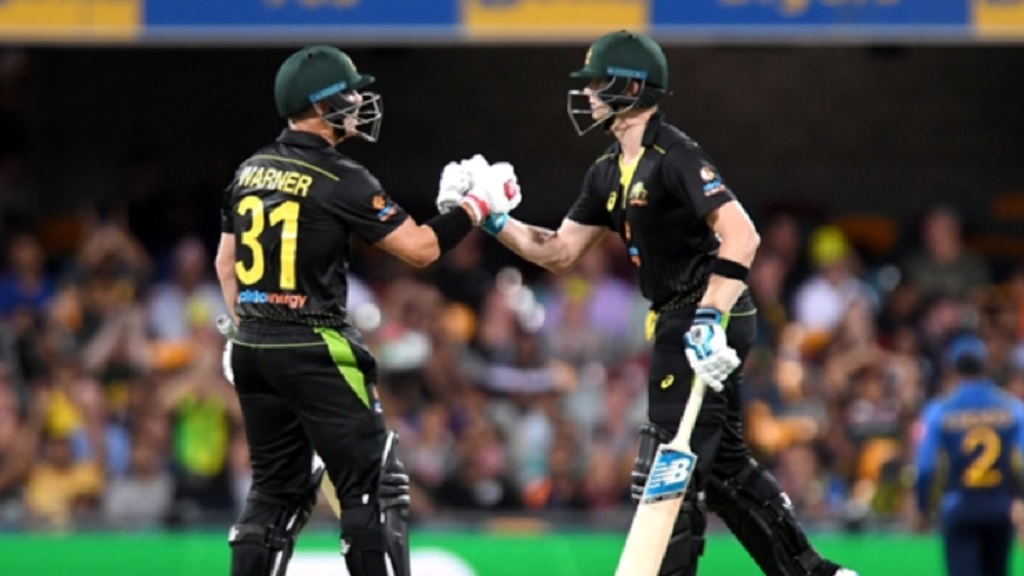 David Warner and Steve Smith at the Gabba.

David Warner and Steve Smith each produced unbeaten half-centuries as Australia breezed to a nine-wicket victory over Sri Lanka and secured a Twenty20 series win.

Australia enjoyed a record margin of victory in the opening contest of the three-match series, triumphing by 134 runs, and it quickly became apparent matters would be similarly straightforward at the Gabba.

Sri Lanka batted first and could not see out the 20 overs as they were all out for 117 with Kusal Perera top-scoring on a measly 27.

Captain Aaron Finch's first-ball dismissal for the hosts was then as good as it got for Sri Lanka with the ball, as Smith joined Warner for a straightforward chase, which was completed with seven overs still remaining.

The opener made 60 and Smith added 53 as Australia (118-1) clinched the series with a match to spare, ahead of surely more taxing T20 and Test outings against Pakistan next month.

Sri Lanka did not help themselves after winning the toss and electing to bat, with a terrible mix-up seeing Kusal Mendis run out in just the second over.

Australia never ceded control and shared the wickets around as Ashton Agar (2-27) accounted for the potentially dangerous duo of Avishka Fernando (17) and Perera.

Alex Carey was busy behind the wicket, stumping both Wanindu Hasaranga and Lasith Malinga off the bowling of Adam Zampa (2-20).

Billy Stanlake took 2-23 and Pat Cummins 2-29, before the latter ran out Lakshan Sandakan to bring another dismal Sri Lanka innings to a close.

Opening bowler Malinga then gave the tourists brief hope as Finch was caught down the leg side by Perera, though that wicket merely brought Smith to the crease.

An unbroken partnership of 117 was speedy enough without being truly explosive, with 15 fours - four of them in the fifth over alone - but no maximums between Warner and Smith.

Sandakan made a mess of a late attempted run-out of Smith, and Australia had seven overs to spare when Hasaranga bowled a wide past Warner to complete a simple chase.