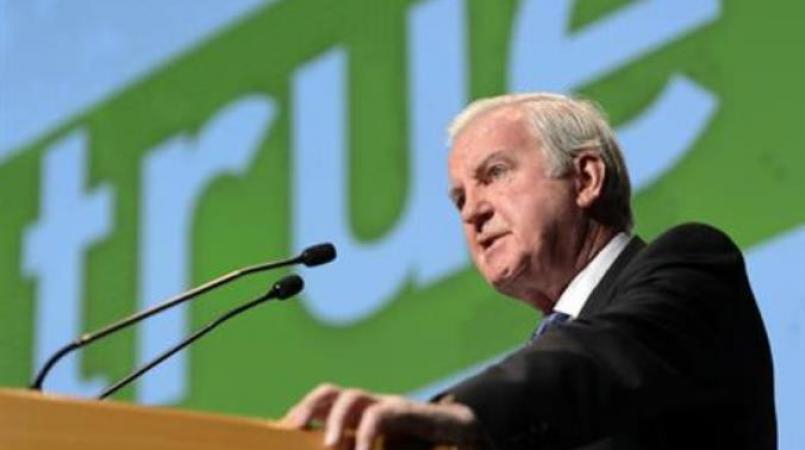 Tensions over the Russian doping scandal broke out into the open again on Wednesday as Olympic officials blasted the World Anti-Doping Agency (WADA) and an influential powerbroker called for a "neutral" leader to take over the body from Craig Reedie.

WADA came under sharp attack from delegates at the general assembly of the Association of National Olympic Committees (ANOC), particularly over the agency's handling of the allegations of state-sponsored Russian doping that overshadowed the buildup to the Rio de Janeiro Games.

In an unexpected development, ANOC President Sheikh Ahmad Al-Fahad Al-Sabah said reforms of the anti-doping agency will be difficult "unless we will have a neutral chair for the next three years."

The sheikh proposed a resolution seeking a "neutral leadership of the reform of the organization."

The move came just four days before Reedie, an IOC member from Britain, is scheduled to be renewed as WADA president for a second three-year term at agency meetings in Glasgow, Scotland. It also came less than a week after the IOC executive board said it would support Reedie's re-election.

"I found the sheikh quite difficult to understand," Reedie told The Associated Press. "I wasn't sure exactly what he said."

Reedie, who met privately with IOC President Thomas Bach after the conference debate, said he envisions no immediate change to an independent president of WADA.

"I think that would be difficult to happen between now and Sunday," he said, adding there was "no doubt in my mind" that his re-election will go forward this weekend.

Reedie said proposals for an independent WADA president had been previously put forward, but with the goal of implementation in the future.

"That is clearly part of the governance debate," he said. "If they want that to happen I will make sure that it does happen."

Reedie has been WADA president since 2013. Under current rules, a WADA president is elected for three years, with the option of a second three-year term. The presidency rotates between representatives of governments and sporting bodies.

The IOC told the AP on Wednesday that the executive board notified Reedie last week that it intends in the "future" to have a neutral WADA president "for the sake of the credibility and good governance."

The board proposed to work with governments to change the current rotation system to clear the way for the new leadership.

"At the meeting, Sir Craig accepted this approach and said he would not stand in the way of such a solution," the IOC said. "Following this, he received the support of the IOC executive board for his reappointment as WADA President."

Critics have accused Reedie of having a conflict of interest in his IOC and WADA roles. In addition to WADA president, he was an IOC vice president and member of the rule-making executive board until the Rio Games. However, Reedie's term as vice president and board member has expired, and he is now a regular IOC member without a policy-making role.

The IOC executive board offered its support for Reedie's continued role but only after he promised to "respect the rules and responsibilities of WADA and its stakeholders." That suggested the IOC wants to make sure WADA will refrain in the future from publicly calling for a nation to be barred from the Olympics, as it did with Russia before the games in Rio de Janeiro.

Wednesday's meeting in Doha reignited the conflict between WADA and the Olympic movement over Russian doping.

The two sides fell out before and during the Rio Games following a report by WADA investigator Richard McLaren that detailed state-sponsored doping in Russia, including manipulation of samples at the 2014 Sochi Winter Games and cover-ups of positive tests across dozens of summer and winter Olympic sports.

WADA recommended that the entire Russian team be excluded from Rio. The IOC rejected the proposal and instead let international sports federations decide which athletes should be eligible to compete.

The sides appeared to bury the hatchet last month at an Olympic summit in Lausanne, where IOC leaders backed WADA to continue to oversee worldwide anti-doping efforts and gave the agency increased powers to lead the fight. All parties agreed that an independent body under WADA's umbrella should be set up to carry out global drug-testing.

But on Wednesday, delegates criticized WADA on several fronts, saying its investigations were harming the image of the Olympic movement. They again complained about the timing of the McLaren report, which came out a few weeks before the Rio Games and generated massive media coverage.

McLaren is scheduled to release his final report next month, focusing on the Sochi doping scandal.

Sheikh Ahmad and other delegates also attacked WADA for announcing the suspension of Doha's doping lab on Monday on the eve of the ANOC assembly. Reedie apologized for the timing, saying it was not intentional.