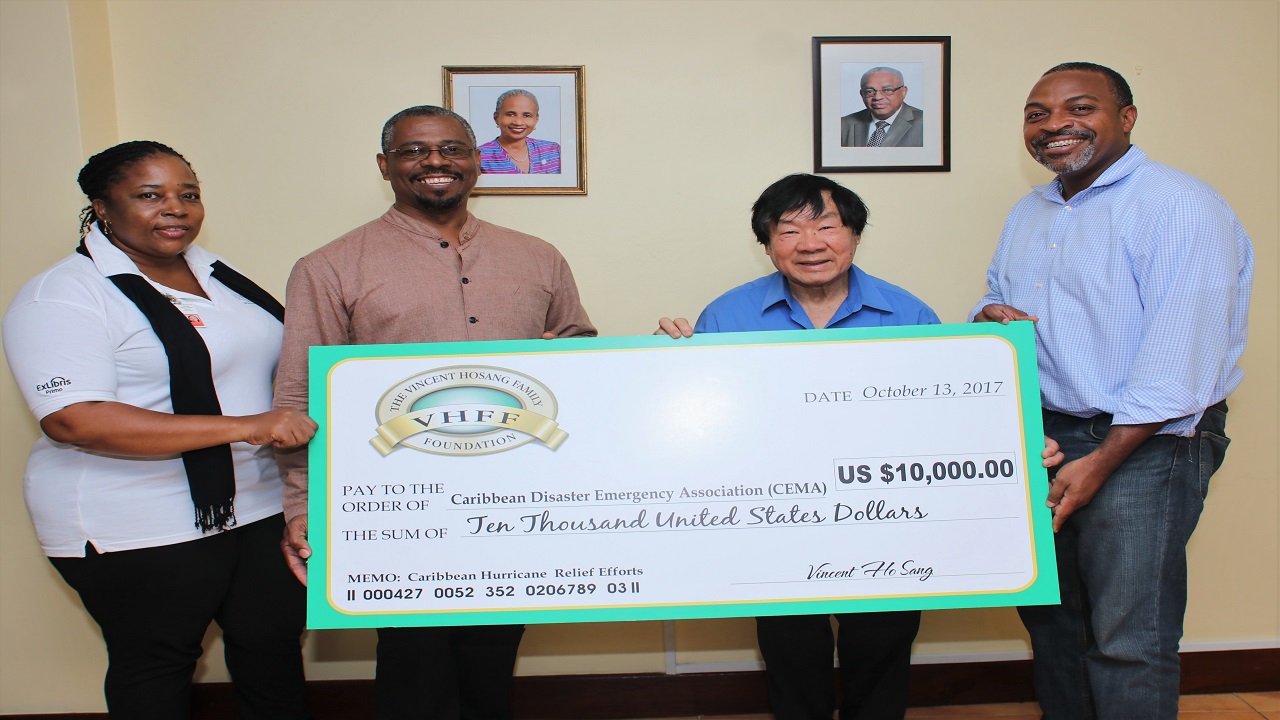 The Vincent HoSang Family Foundation has donated US$10,000 to the hurricanes Irma and Maria Caribbean relief efforts being spearheaded by the University of the West Indies (UWI) through its newly established Caribbean Emergency Management Association (CEMA).

Formed to assist islands devastated by the two hurricanes which hit the region in September, CEMA is a joint fundraising organization with the Caribbean Disaster Emergency Management Agency (CDEMA).

Presenting the cheque at The UWI Mona Western Jamaica Campus (UWI/WJC) in Montego Bay, Dr. Vincent HoSang, Chairman of the US-based Foundation said that he was “saddened at the devastation wreaked by the Hurricanes and the suffering of our Caribbean brothers and sisters.  I hope this donation will help to put them on the path to recovery.”

The Jamaica-born HoSang’s Caribbean Food Delights is a leading producer of Jamaican-styled patties in North America.

Dr. Luz Longsworth, Principal of The UWI Open Campus who is leading the hurricane relief efforts in the islands on behalf of The UWI, said “we are elated to receive the donation from Dr. HoSang as there is a lot of work to be done to rehabilitate the islands destroyed by Irma and Maria.  We are seeing the devastation firsthand as our UWI teams work with the officials in islands like Dominica, Barbuda where our Open Campus family and others have been hard-hit.  The UWI is mobilizing resources from alumni, philanthropic individuals and companies in the Caribbean and internationally to help finance relief efforts.”

Dr. Longsworth lauded the generosity of Dr. HoSang, a longstanding major donor to a number of UWI programmes including the Mona School of Business & Management project for Entrepreneurship and full tuition scholarships offered through the American Foundation for The University of the West Indies (AFUWI), for needy students pursuing their first degrees at The UWI.

A well known business leader and philanthropist, Dr. HoSang holds the national honour, the Order of Jamaica conferred by the Government of Jamaica and an honorary Doctor of Laws Degree from The UWI.