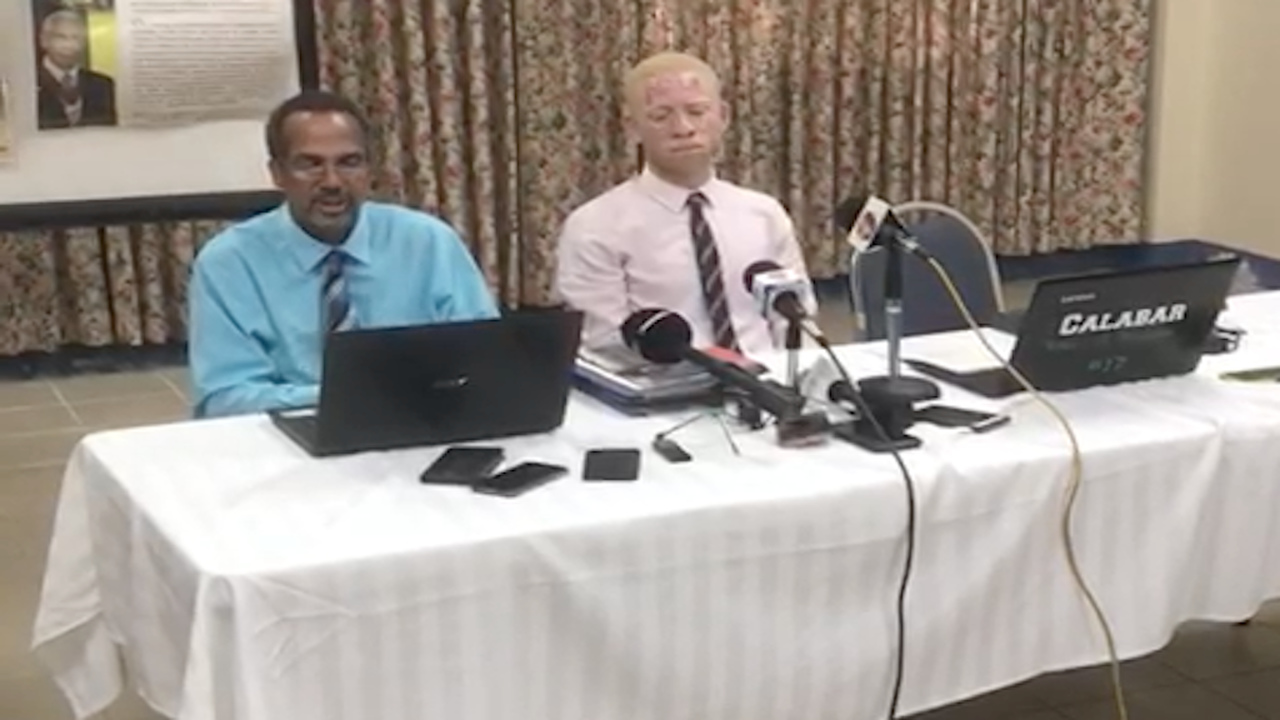 Former Calabar head boy David Fitz Henley (left) addresses journalists. Seated next to him is Sanjaye Shaw, the physics teacher who was allegedly assaulted by two star athletes of the school.

No respect, disrespect, in all aspect - Buju Banton

The recent incident involving physics teacher at the Calabar High School, Sanjaye Shaw, and prominent athletes at the school, Christopher Taylor and Dejour Russell, has brought into the spotlight a burning issue that has been slowly eating away at the moral fibre of Jamaica.

As a country we have lost all respect for our most important resource, our educators.

Now let me clearly state that the issue with Shaw and the students has three sides with the truth lying somewhere in between. I am not taking any sides on the issue as the actions of all parties involved have left a lot to be desired.

Shaw, the school, the track coach and the athletes all need to do some introspection and admit where they went wrong.

But that is not the subject of this column.

There was a time in Jamaica when the teacher, the police and the pastor were the most respected persons in the community. Of the three, only the pastors seem to have been rewarded with material gain, but all three seem to have lost that position of esteem they once held for different reasons.

The incidents of teachers being attacked and assaulted by students have been occurring for far too long and there seems to be no end in sight.

Over a decade ago, I went to a high school in the Corporate Area after reports emerged that three students attacked and severely beat a male teacher. As is the culture of school administrations, everything was done to cover it up.

Just recently, a student of a prominent school was caught on video threatening to rob a teacher, and the female seemed to cower. Even after that video was released into the public space via social media, and the police got involved, efforts were made by the school to shield the student from being chastised by the authorities.

There are reports of star athletes at other prominent high schools threatening to get teachers fired due to the fact that their parents are major donors to the institution, and there are even reports of female teachers being chatted up in the most disgusting sexual fashion by male students.

This happens at many schools across the island.

Why have we given up the old, tried and proven way in which we were raised and are allowing children to feel as if they can be openly ‘fresh’ with adults who are in a position of authority?

Parents are now going to school and physically assaulting teachers for disciplining their children. That equation seems unbalanced, unsolvable. Parent and child against teacher.

The proper equation should read parent and teacher partner in the development of the child.

In the case of Mr Taylor, while I cannot take any sides on the matter, I must ask the Calabar administration a few questions.

IF he were suspended for a week on March 12, why was he allowed to represent the school in the recently held Digicel Grand Prix?

If he were allowed to sit his examinations, that would be a completely different matter as those exams are crucial to his future and further development.

However, his absence from a single track meet could not have harmed his athletic career. Is it because his participation was crucial to the school earning a tidy sum in prize money to assist in the athletic programme?

If the answer to the above question is yes, then the school administration has blundered in my estimation.

What message is being sent to the youth when, after the school finds it justifiable to suspend a star athlete, the same athlete is allowed to represent the school due to his ability to earn money for the institution?

So, is the administration saying Taylor can break school rules and get away with it? If he was not allowed to perform then a better message would have been sent to all and sundry in the school population that the school authorities deal with everyone equally. That action seems to suggest that star athletes are more equal than students who, for example, are great at mathematics and may become a leading scientist.

A teacher’s salary may afford them to live in a middle class community at best. The imbalance of society will probably see Taylor, if he shines at the professional level, living in opulence in an upper crust neighbourhood next to the Joneses, - after all, he has already signed a sporting contract.

The gory details of the Taylor/Shaw affair are yet to be completely divulged but one thing we should never forget, teachers are perhaps our greatest resource as a nation.

From the prime minister through to world famous athletes; entertainers and even the street sweepers, we were all influenced by a teacher at some point in our lives.

They should be respected and revered for the service they provide to Jamaica and they should at the very least be better paid.