A view from the outside: Folly and prejudice at school in Jamaica? 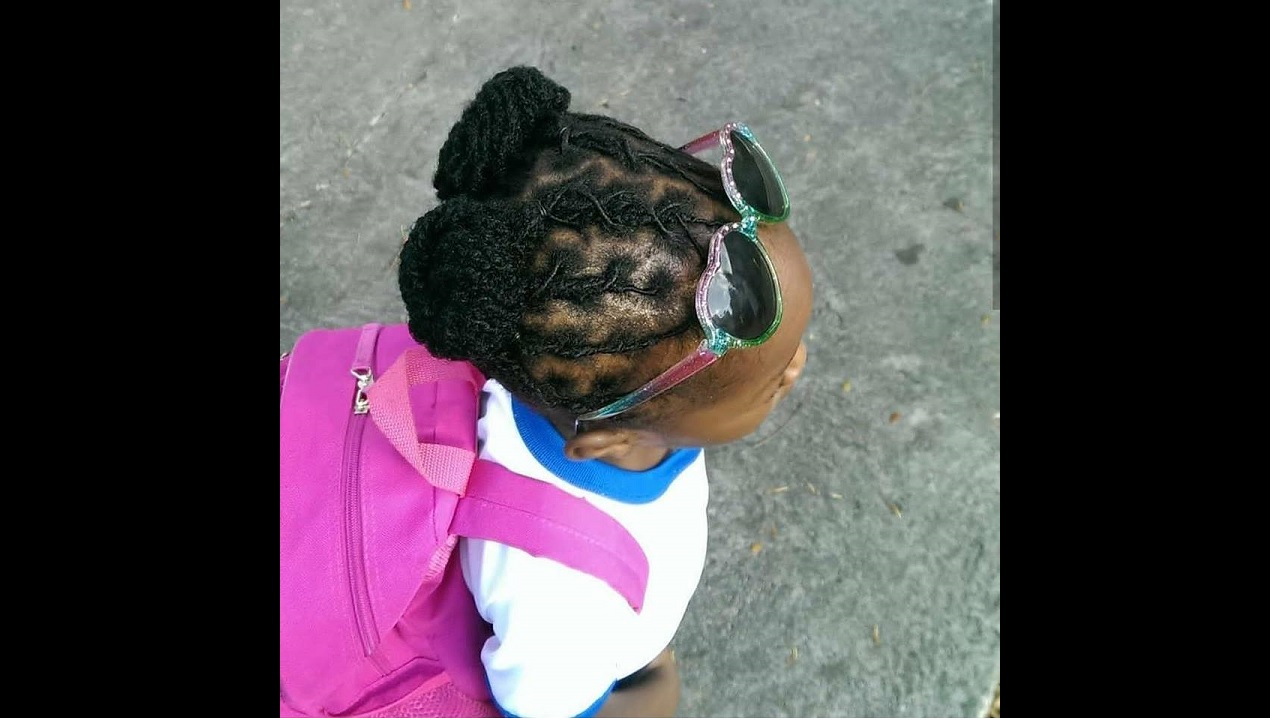 A photo of the hairstyle of the girl who was reportedly refused full access to Kensington Primary.

Take the kinks out of your mind not your hair – Right Honourable Marcus Mosiah Garvey.

It is almost unbelievable to hear that in 2018, this modern day and age, in a country that brought Rastafari to the world and is still a forerunner in black liberation and consciousness, that a child is reportedly being refused an education because he or she wears locks.

Last week, reports emerged that the principal at the Portmore, St Catherine-based institution, Kensington Primary, allegedly removed a female student from a line after discovering that the girl wore locks. The female principal reportedly claimed that other students were at risk because the child might be infected with lice and spread the infestation.

The Ministry of Education has since launched an investigation into the matter.

The principal of Kensington Primary claims to have 35 years of experience as an educator, quite an impressive stretch.  That is why, if these allegations are true, it would be quite surprising that the veteran teacher does not seem to know that locks do not cause head lice to multiply. The pesky little insects thrive in an unclean environment and are at home in the heads of humans who do not practice proper personal hygiene. That means a child who does not wear locks and has parents who do not keep their environment clean is just as much a threat to other children and can spread the infestation.

Lice are not synonymous with locks.

The principal’s reported claim smacks of discrimination and is past rude. It is an insult to Rastafarians and, if true, she must be made to understand that her action in regard to an innocent child is disgusting to say it kindly.

That apart, it is a breach of that child’s inalienable human right to deny her an education based solely on the fact that she wears locks. According to the Convention of the Rights of the Child:

A child has a right to participation: The child’s right to be heard on decisions affecting his or her life. As abilities progress, the child should have increasing opportunities to take part in the activities of society, as a preparation for adult life (e.g. freedom of speech and opinion, culture, religion and language.

It is illegal to deny a child the right to education due to her parents’ religion.

Kensington Primary is a government funded institution and as a principal of a public school, the educator in question is bound by the rules set by the Ministry of Education and must operate under the dictates of the law of the land. She is after all, paid by the taxpayers of the nation, many of whom wear locks.

I have gotten hold of a voice note purportedly of the parent of the student and the principal embroiled in a heated exchange over the educator’s reported action of singling out the child and being adamant that the child posed a risk to the school population because of her natural hair.

If it was indeed the principal, the learned educator sounded to be most unlearned. It would be interesting to find out if students are allowed in school with processed hair.

To his credit, Minister of Education Ruel Reid, who is the former principal of Jamaica College, publicly stated that the reported actions of the administrators at Kensington Primary were illegal. I hope that the child will be allowed to attend the school and that the principal and staff will not be childish enough to victimize the student.

Such action speaks to a mindset that has befallen some persons in Jamaican society.  They fear and hate anything different and not in sync with what they deem to be proper. It is part of the colonial hangover which deems anything afro-centric as something to be frowned upon.

The Kensington Primary principal is a citizen of a country whose most famous son is Rastafarian. No politician, sportsman or any other internationally known Jamaican has brought more positive light to shine on Jamaica than the Honourable Robert Nesta Marley OD. Bob Marley is the undisputable King of brand Jamaica.

Jamaica and Rastafari are seen as one and the same by many in this world and it must be shocking to some that in this day and age a child who wears locks has reportedly been turned away from a Jamaican school based, not on any disciplinary reason, but simply because of locks.

What are we to expect from our youngsters, who frown upon their natural beauty and opt to bleach their skin and wear false hair, if in our own schools we send a signal that wearing their natural hair is nasty and is opening up themselves to ridicule?

How can we be angered when extremists in countries like Afghanistan and Nigeria burn down schools, poison their water supply and kidnap dozens of girls under the guise that females must not be educated if we are so petty as to turn away a child due to her kinky, nappy hair.

Is the principal aware that Jamaica was the first country in the world to ban trade with the apartheid regime of South Africa? Does she know that reggae music, conceptualized by Rastafarians, is the music of oppressed people the world over and was instrumental in breaking down not only the evil apartheid regime, but others in Angola, Zimbabwe and other nations?

It does not matter that Kensington Primary has churned out students who have aced the Grade Six Achievement Test (GSAT) on a regular basis. Every child can learn and every child must learn.

At the time of writing this article, the beautiful and gifted female quarter miler, Stefanie Ann McPherson of Jamaica had just took the winners spot in the 400 metres in the Athletics World Cup in London. As she decimated the opposition, her nappy, locked hair bounded about. She certainly was not banned from the race because the organisers feared the other competitors would be infested with head lice.

That principal is no stranger to controversy as in 2012, reports emerged that she stoutly defended corporal punishment in her school and said it was an effective way to keep the school ‘on top’. It is on record that parents have complained because their children have been slapped by teachers there.

As the great Jimmy Cliff instructed in song, the principal must ‘treat the youths right, instead of giving them a fight.’

The politics of the beautiful sport