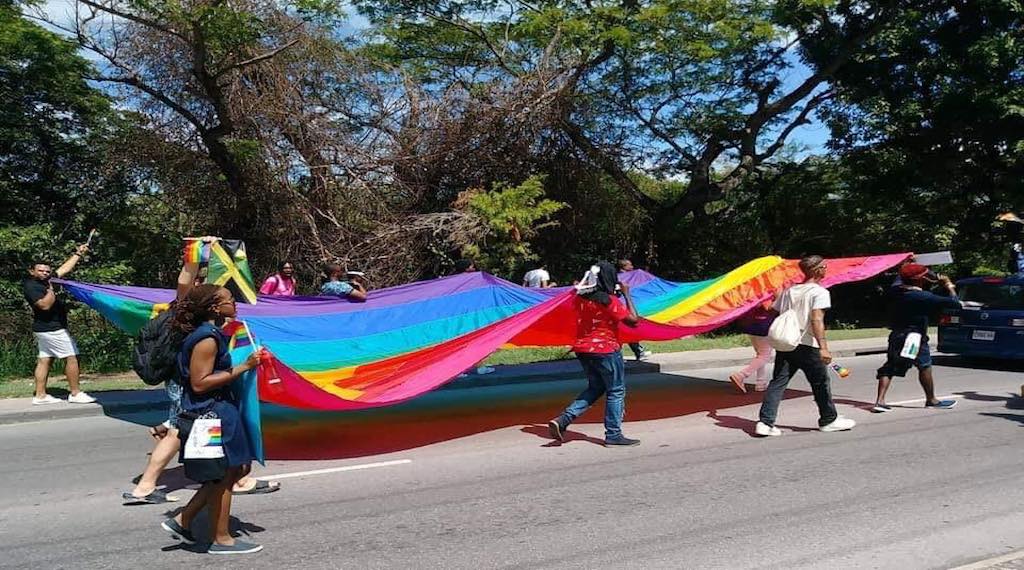 And the debate rages on.

Opinions differ at home and abroad on whether Jamaica is still fiercely opposed to gay relationships or if homosexuals are now being tolerated more and the perceived persecution that they once claimed to have been victims of is trending downwards.

In recent times, reports have resurfaced that a band of rowdy gay criminals has been wreaking havoc in the busy Corporate Area commercial hub of Half Way Tree. The cross-dressing criminals are reported to be robbing law-abiding citizens at gun and knife point and threatening them with corrosive substances if they resist their demands, before making good their escape.

Their criminal activities are taking place within close proximity to the headquarters of the St Andrew Central Police division, according to a report carried by Loop News.

That a band of openly gay, cross-dressing criminals could be so wantonly operating in such a busy hub as Half Way Tree without being the victims of mob justice is in and of itself testimony to the fact that, to some degree, Jamaicans have become more tolerant of those among them who are gay.

Even the narrative of the once fiercely anti-gay dancehall culture has softened. That industry reportedly has known homosexuals operating within its ranks and, so far, there have been no reports of any harm coming to those individuals.

This is not to say that some of the island’s inhabitants do not harbour deep prejudice against gays, especially those of the male kind. However, it would be a gross misrepresentation of the country’s attitude towards gays to report that homosexuals are being targeted for violence and are being persecuted simply because they are gay.

In recent times, two prominent Jamaicans have come under fire for expressing the sentiment that Jamaica is not a ‘homophobic’ country. Journalistic colleague Orville ‘Black Line’ Taylor has penned two columns on the subject in the Gleaner, while Councillor for the Trafalgar Division, Kari Douglas has also rubbished any claims that gays are being persecuted in Jamaica.

Taylor cited a number of reasons why the label does not fit and, for his view, was lambasted by persons sympathetic to the gay cause. Douglas too has been hauled over the coals for expressing her opinion on the touchy topic.

As Douglas pointed out, a recent gay pride march held in Montego Bay, St James, which was organised by prominent gay rights activist, Maurice Tomlinson - who himself hightailed it out of Jamaica in 2012 after a photograph of his marriage to a Canadian policeman was published in a Jamaican newspaper - is proof that Jamaicans have become more tolerant of the homosexual lifestyle.

Snippets of the gay pride march shows Tomlinson declaring that the march, which had the blessing and protection of the police, was successful and that it will be bigger and better next year.

Some years ago, when the tolerance level for gays was almost non-existent among the majority of Jamaicans, news broke that a similar march was being planned for the same hub of Half Way Tree where the cross-dressing gay criminals are now wreaking havoc. On that occasion, Jamaicans expressed their disgust in numbers and some persons were even seen sharpening their machetes and bearing other weapons in anticipation of any gay march.

Needless to say, no march happened.

Now years later in 2018, gays are allowed to host the march and not one incident of attack against them has been reported. That in my view is a signal that Jamaicans are becoming more tolerant of gays.

The claim is that the law is anti sodomy and discriminates against gay sex, carrying a penalty of up to 10 years imprisonment.

"Whosoever shall be convicted of the abominable crime of buggery, committed either with' mankind or with any animal, shall be liable to be imprisoned and kept to hard labour for a term not exceeding 10 years."

In any case, the law is archaic and has no place in Jamaican law in my view.

I have spent a considerable amount of my career inside the walls of the Kingston and St Andrew Parish Court (formerly the Corporate Area Resident Magistrate’s Court), where charges of buggery are heard. For most of my almost two decades covering court, I have never seen a homosexual man being charged with the crime of buggery.

It is a hard offence to prove, as a complainant would have to be on hand to give evidence and it would be fair to surmise that in a case of two consenting adults, none of them would have any reason to report to the police that they were buggered.

The only time I have personally witnessed the buggery law enforced in the Jamaican courts was when an adult male had sexually molested a male child and buggered his victim. In such a case, the law should be applied and I am sure that well thinking gay men will agree. After all, being homosexual does not make one a pedophile.

Jamaica is not yet ready to accept open homosexuality similar to places like Cape Town, South Africa, or places in the US like San Francisco or the Greenwich Village in Manhattan, New York. The whole issue must be taken in a cultural context as most Jamaicans of my generation were raised on biblical principles which taught the destruction of Sodom and Gomorrah and the many verses that condemn the act of same-sex relationships. Jamaica has not yet reached the stage where gay marriage and gays being given the right to raise children will be allowed under law, but one thing is for certain - the country is becoming more tolerant of gays.

Perhaps life is so hard that many in the island are busy dealing with bread and butter issues to have time to pry into the happenings inside the bedroom where two consenting adults do their thing.

If this is not good news for gay lobbyists and sympathisers, then maybe they are hoping for too much, too soon.

If a man or woman finds pleasure in copulating with an iguana lizard or a Komodo dragon, what business is it of mine or anyone else, as long as the reptile is an adult and consents to the union?

From recent reports coming out of the island, it is becoming clearer that the days of 'Boom Bye Bye' are fading out of the Jamaican psyche. It is a fact that most Jamaicans either have a gay relative or know someone who is gay.

Remember, oral sex was once taboo in the country. Now persons, both male and female, speak openly about the act without even scornful looks being flashed or discriminatory words being spoken.

Take heart gay lobbyists and sympathisers; the situation is not so bad and that is why the nefarious activities of the cross-dressing criminals who are giving the law-abiding gay citizens of Jamaica a bad name must be eradicated post haste.

Karyl Walker is a multi-award-winning journalist who has worked for Loop Jamaica, the Jamaica Observer, the RJR Communications Group and Nationwide Radio among other media entities. He now resides in South Florida.For the latest news, download our app at http://bit.ly/GetALoopJM for Android; and at http://bit.ly/GetiLoopJM for IoS.