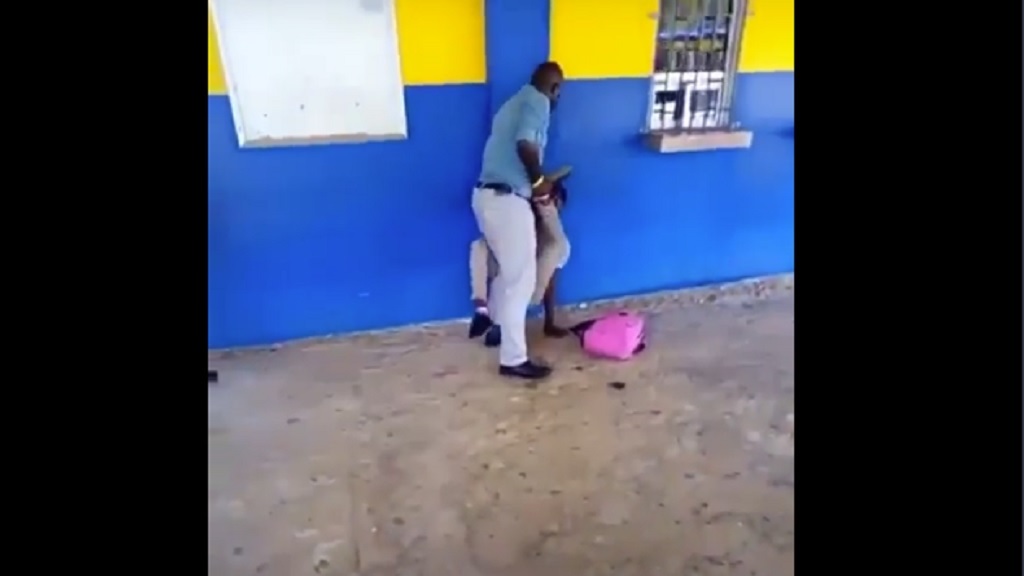 A screen grab from a video of a 'teacher' and a student engaged in a tussle about a pair of pink socks that the student wore to school.

There are mixed views from social media users on a video in circulation that depicts an adult male and a male student engaged in a dispute over a pair of pink socks which the student had worn to school on the day in question.

Loop News has learnt that the male in the video is a teacher at a popular high school in St Elizabeth. The student attends the same institution.

The incident is said to have occurred last week.

The 28-second amateur video shows the ‘teacher’ cornering the male student in the presence of another adult male on the school's campus.

The student then slides and falls to the ground. The man then grabs hold of the student's left leg.

The student slightly eases himself off the ground, but the man maintains his hold on the student's leg.

"Weh mi say yuh fi do? Try something nuh... Tek off di socks. Yow, tek off the socks!” orders the figure in authority.

“Weh mi say yuh fi do?" The man can be heard further saying while trying to remove the student's shoe.

The man eventually removes the shoe and throws it to the ground, revealing that the student had worn a pair of pink sock, which would be against a school rule.

The student eventually got up off the ground, but the man continued to hold on to him, insisting, “Tek off di socks mi say bwoy".

The video ended at that point.

Social media users have expressed varying perspectives on the actions of the man, with some in support of his actions in reprimanding the student.

"How him (the student) reach a school in that socks and him know it's against the rules? Where are his parents? Parents have no idea how dem children behave at school. It takes a village to raise a child. Same way unno cuss and gwaan when police shoot dem. Shield dem now fi come (turn) a menace to society later... Pathetic," said a female social media user.

Another female argued: "How did he (the teacher) abuse him (the student) though??? Nuff a dem school boy yaa a big man!! Mi nuh see him (the teacher) do nothing wrong. All now him nuh lick him."

However, some social media users believed that the man's actions were excessive towards the boy.

One individual, while agreeing that there is need for students to understand that discipline is important, was not in full support of the teacher’s actions.

"In our society now, children don't follow rules and regulations, and this is messing up our society. Rules are set in schools for each child to follow, because it's preparing them for the future," she posted.

But she said the man could have punish the child in other ways.

"... But to be honest, the teacher was wrong. I don't care how many times he had to speak to him, there are so many other ways to punish a student."

"The teacher is wrong. If the child broke a school rule, his parents should be called or he should have been suspended. Don't get involved in a tussle with a child," another social media user suggested.

One poster purported that although the man had no right to hold on to the student in question, as was seen in the video, he was a "humble and easy going teacher".

Said the poster further: "I know that man had no right to be doing that, but that's the school I went to, and he is a very, very humble and easy-going teacher. Trust me when I say that boy p…ed him off!!... He (the teacher) literally makes you get away with anything."

Do you think the man was excessive in reprimanding the student? Share your own viewpoints with us.