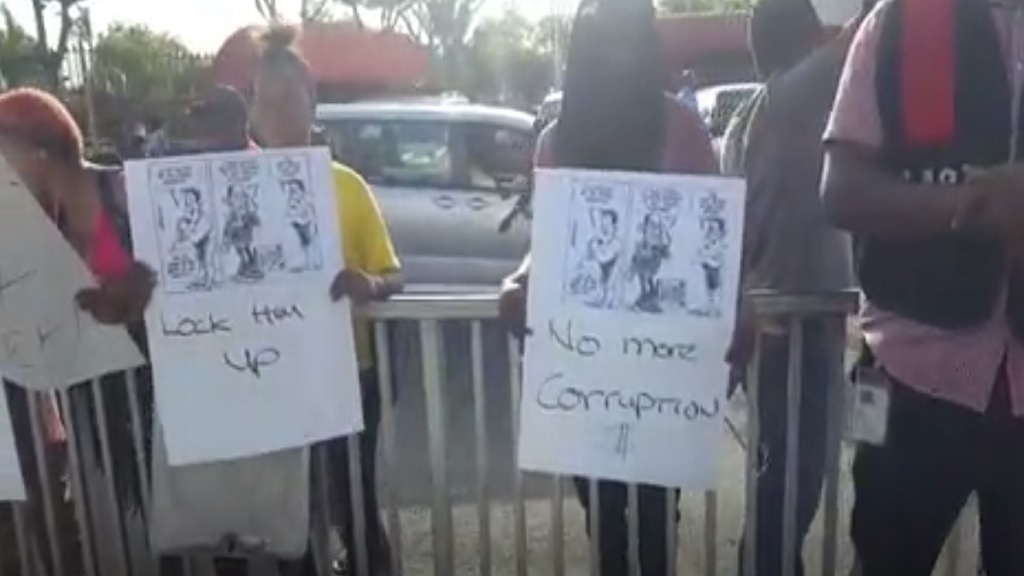 A screen grab from a video of the early stage of the PNP corruption vigil at Mandela Park in Half-Way Tree, St Andrew on Thursday morning.

The Opposition People’s National Party’s (PNP) promised corruption protest is now under way at Mandela Park in Half-Way Tree, St Andrew, where the party is seeking to pile on pressure on the Andrew Holness Administration over mounting corruption allegations in the Government.

A statement from PNP General Secretary. Julian Robinson, said the protest, described as a ‘vigil’, comes “in light of the ongoing spread of allegations of corruption across several ministries and public bodies, and the lack of appropriate action by the Andrew Holness Administration to hold its members accountable.”

Robinson said the vigil, of which a video of the early stage is carried below, is the first in a series of events across the island to bring awareness to the issue.

Said Robinson:  “The PNP, through its parliamentary groups and committees, has exposed… corruption in various ministries and agencies, including the Ministry of Science, Energy and Technology, the Ministry of Education, the Ministry of National Security and the Caribbean Maritime University, Petrojam, USF, NESoL, the UDC and through projects such as the $800 million de-bushing programme, and the $230 million purchase of used cars for the police that are yet to be delivered in full.”

The general secretary said all well-thinking Jamaicans should be disturbed at what he described as a wanton waste of taxpayers’ money.

“The first vigil this Thursday is expected to see persons from Region 3 of the party’s organisation decrying the system of corruption” which Robinson said has gripped the Government, he asserted.

The PNP’s Region 3 is made up of the parishes of Kingston and St Andrew.

Amid the scandals that have dogged the Government over at least the last year, two Cabinet ministers - Dr Andrew Wheatley and Ruel Reid - were forced to resign over allegations of corruption, including cronyism and nepotism, at the ministries over which they had oversight responsibility.

Reid, the former Education Minister, is currently under a criminal investigation by the police as well as the Financial Investigation Division (FID), following allegations of misuse of funds at the Caribbean Maritime University (CMU) over which he had oversight responsibility.

The Auditor General’s Department is also conducting a probe at the Education Ministry.

Jamaican economy would be three times larger with corruption control