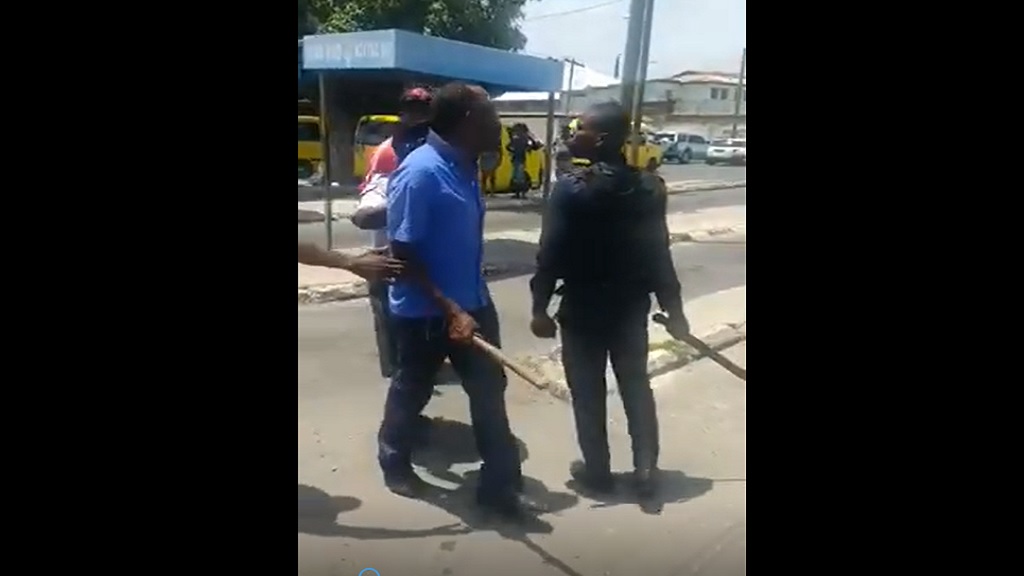 The police are probing a violent confrontation between a municipal police officer and a bus driver, reportedly at the Spanish Town bus park in the parish.

The municipal police officer had to be hospitalised after being reportedly hit with a stone in the face, which broke his jaw in the incident on Tuesday.

He has since been released from hospital.

In one of a number of videos of the incident prior to the attack, the bus driver is seen threatening two municipal police officers amid the use of expletives.

See an edited version of one of the amateur videos below.

"Yah go dead…," the bus driver, clad in uniform, said while armed with what appeared to be a stick.

A female tried to split up a face-off between the bus driver and the municipal police officer who ended up being wounded.

But the confrontation continued between the men, with the driver moving towards one of the municipal officers who was armed with a baton.

The other municipal officer is seen calling his colleague to leave the area.

The municipal officers, who are employed to the St Catherine Municipal Corporation, then headed to a parked pick-up van.

One entered the front door of the vehicle and closed the door, but the bus driver attempted to open the door.

The other officer, on seeing what was happening, approached the bus driver, telling him to "easy yourself", but the driver swung the stick he had in hand at the officer's head.

An all-out fight then ensued between the two men, with both hitting each other with their 'weapons'.

A stone was later used to hit the municipal officer who was in the fight, with the development bringing the physical tussle to an end.

The injured municipal police officer is seen in one of the videos holding onto his face.

What sounded like gunfire could be heard on the scene towards the end of the fight.

The incident has been reported to the police, who are continuing with their probe, including to locate the bus driver for questioning.