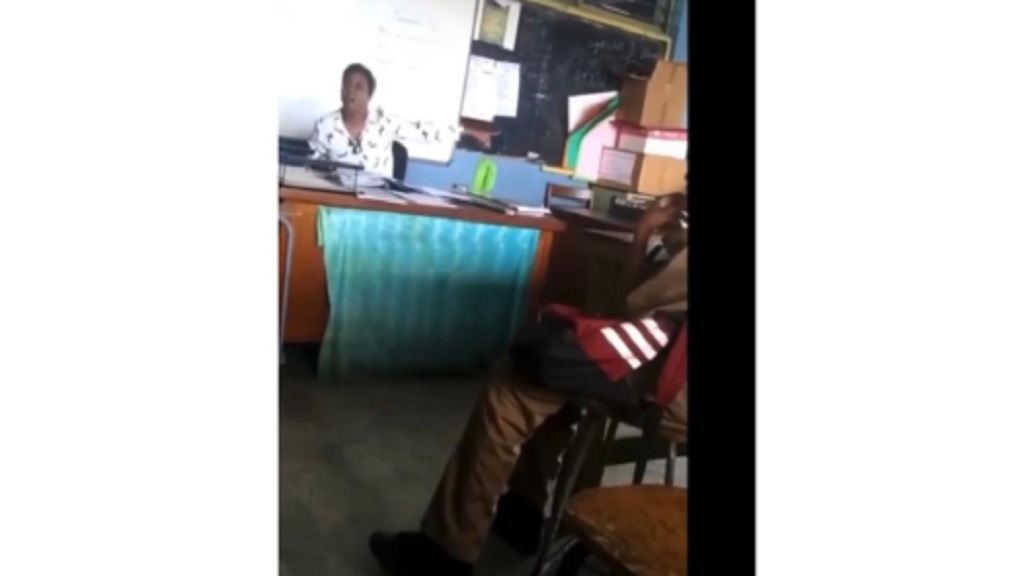 A screen grab from a video of a verbal clash between a teacher and a student at a St Andrew-based high school on Thursday.

Officials at a St Andrew-based high school have launched an investigation into an incident that was captured on video showing a female teacher and a student arguing to the point where the teacher told the student that she was not afraid to ’murder’ him if the student was brazen enough to approach her in a physical confrontation.

The incident unfolded on Thursday of this week.

The three-minute video carries audio of a male student from the school threatening a female student who was having a conversation with the teacher in a classroom.

The teacher, who appeared annoyed with the male student whom she accused of shouting at her, instructed that the student should remain quiet, and that was when things started going downhill, as the student went toe-to-toe with the teacher.

“Don’t shout at me. Mi look like yuh mumma!” the teacher snapped at the offending student who was insisting that the teacher was telling lies on him.

The student responded by asking the teacher if she was telling him about his mother.

At that point the argument descended into an all-out verbal warfare, with the teacher asking the student if he is a ‘handicap’, suggesting that he should understand that there is a difference between being asked if he thought she was his mother, and being told about his mother.

“Did I tell you about your mother?” asked the teacher.

During the argument, the teacher was heard issuing several threats of doing physical harm to the student, with even emphasis that the threats represented a “promise”, not just a threat, and he could report it to the police if he so desired.

“Mi wi kill you in yah eno; my head no nice,” the teacher is heard saying.

The principal of the school told Loop News that he was aware of the incident, and it is being investigated.

The video has triggered a storm of reactions from social media users, with some saying the teacher was disrespectful, but other users said while it was a bit aggressive on her part in view of violent altercations between teachers and students in the past, some educators have had to become more aggressive in some school environments as a means of protecting themselves.

“We have heard about cases in the past where students threaten and harm teachers and what we are seeing here is a frustrated teacher who has reached breaking point and has decided that she will not be victimised by an unruly student,” one social media user said in support of the educator.

On the other hand, a social media user insisted that the teacher went out of line when she spoke to the student in the manner that she did.