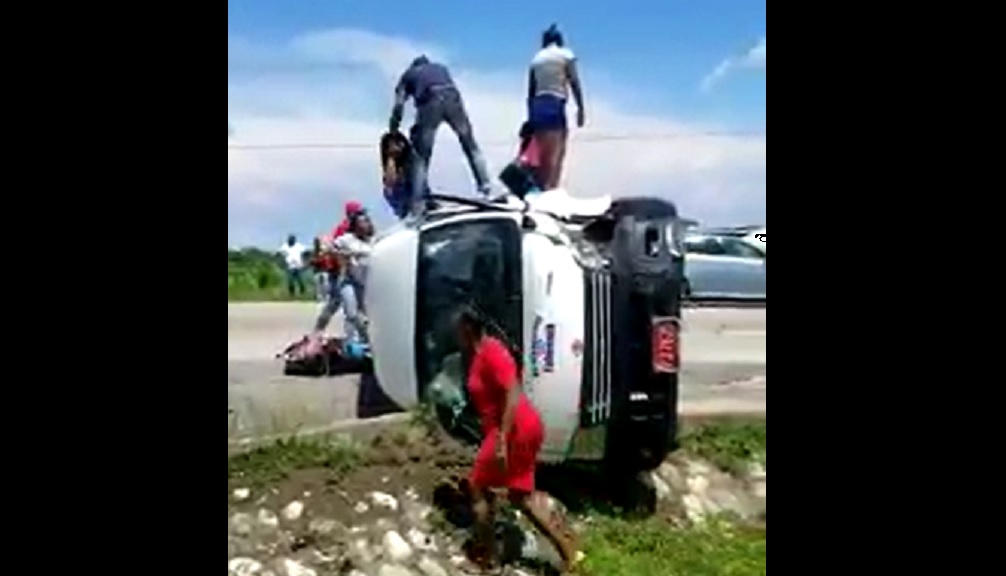 Screen grab of a video showing the aftermath of the crash involving a bus and a motor car in Llandovery, St Ann on Monday.

Four persons were taken to hospital after an accident involving a public passenger vehicle and a car along the Llandovery main road in St Ann's Bay on Monday.

Miraculously, no one was killed.

"Three persons, along with the bus driver, were injured and admitted to hospital in stable condition," a representative of the Corporate Communication Unit, the information arm of the Jamaica Constabulary Force, told Loop News reporter Claude Mills.

Reports are that around 11.50 am, the bus was heading towards Runaway Bay along the Llandovery main road, travelling behind a motor vehicle. The motor vehicle attempted to make a right turn at the same time that the driver of the bus was attempting to overtake the car, and the vehicles collided.

A video making the rounds on social media shows several persons rushing to the aid of the injured passengers, one of whom was a pregnant woman.

Despite a number of initiatives aimed at reducing the carnage on the roads, the Road Safety Unit in the Ministry of Transport has reported that over 300 persons have already died on the nation’s roadways this year with just over three months remaining. Last year, a total of 389 persons died in motor vehicle crashes.

The last time Jamaica recorded under 300 road deaths was in 2012 when 260 persons died on the nation’s roadways.