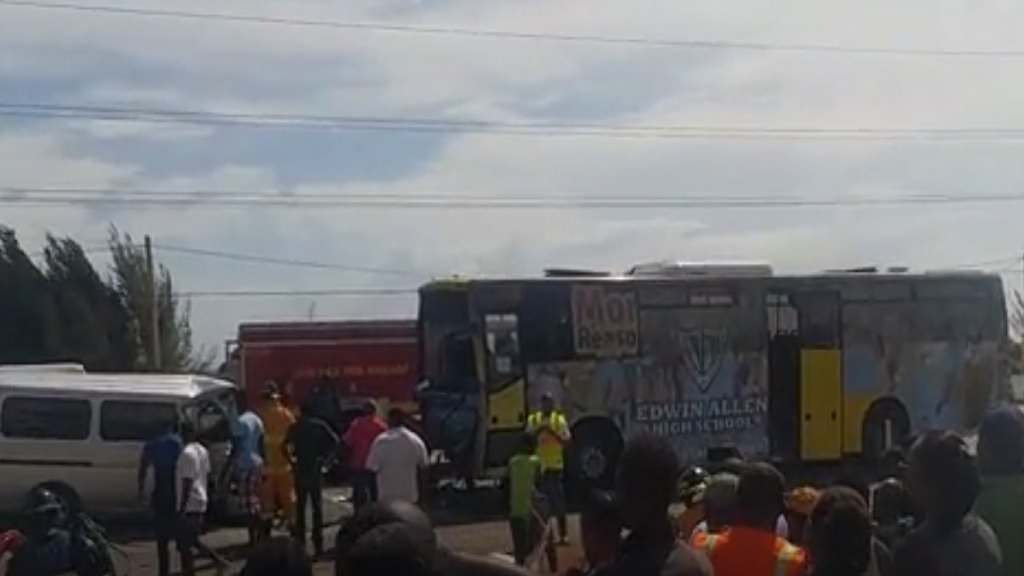 A screen grab from a video of the scene of Saturday morning's crash in Richmond, St Ann, after the separation of the two vehicles which got entangled in the head-on collision.

A father and son from St Catherine died in a two-vehicle collision involving a Jamaica Urban Transit Company (JUTC) bus and a van, along the Richmond Main Road in St Ann on Saturday morning.

The deceased have been identified as 55-year-old Elkeito Mushette of Greater Portmore, and Sheldon Mushette, 29, of Spanish Town.

The police reported that about 9am, Elkeito was driving a Nissan Panel van along the road towards St Ann's Bay with his son on board, when upon reaching the vicinity of the Royal Plantation scheme, he lost control of the vehicle.

It is further reported that the van drifted into the path of a JUTC bus that was heading towards Montego Bay.

The two vehicles slammed into each other head-on, resulting in heavy-duty equipment and firefighters being required to cut the Mushettes from the wreckage of the van, as is partially demonstrated in the video below.

Both Elkeito and Sheldon were later pronounced dead at the hospital.

Meanwhile, the driver of the JUTC bus and 45 passengers travelling in that vehicle were also taken to the hospital. One person remained admitted, while the others were treated and released.

The passengers in the JUTC bus were reportedly members of a church from Spanish Town, St Catherine, who were heading on a church excursion.

A church excursion on a JUTC bus in the Faith’s Pen area of St Ann some years ago resulted in the death of a young member of that religious group after the bus driver failed to negotiate a corner and the unit plunged over a precipice and eventually came to a crashing halt.

There were also mass injuries among the passengers in that incident.