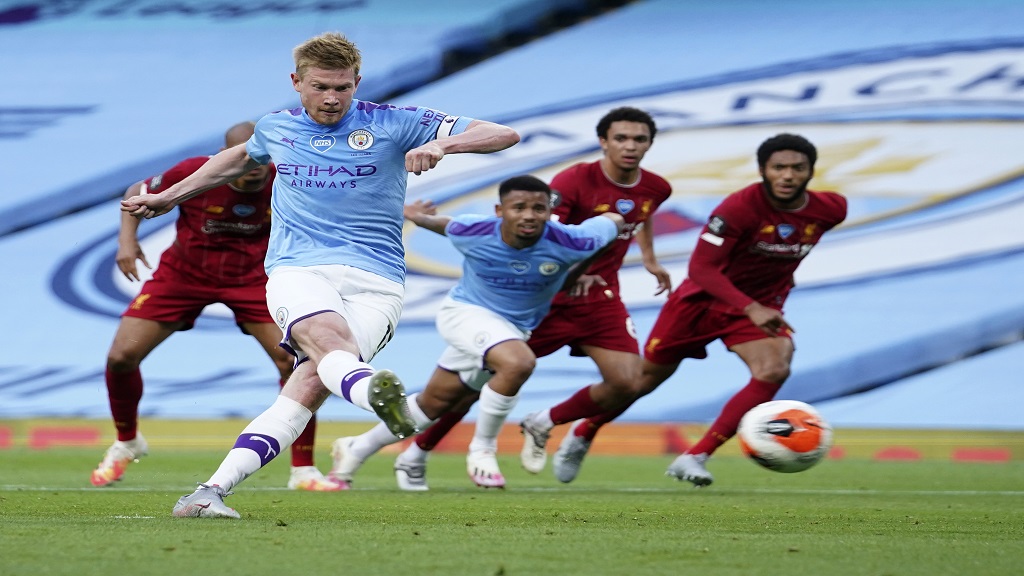 Liverpool's first outing as Premier League champions proved one to forget as Guardiola's dethroned City ran out 4-0 winners at the Etihad Stadium.

Phil Foden made it 3-0 on the stroke of half-time and Alex Oxlade-Chamberlain turned Sterling's shot into his own net to complete the scoring.

The latter two goals featured typically precise De Bruyne passes in the build-up and the Belgium midfielder underlined his case for being the Premier League's outstanding player against unquestionably the division's outstanding team this season.

"He can run, the vision he has. The personality he shows right now, scoring four penalties in a row when we struggled this season with them.

"Right now in the midfield position is the best.

"Of course he can get better. How? He knows it."

Foden was again worthy of praise within the supporting cast, with the England Under-21 midfielder's assured finish bringing his fourth goal in three Premier League outings since the resumption.

"What we have done is try to protect him," Guardiola said.

"Don’t let him play every single game. Young players have to be careful in the first steps.

"There is not one day when he has had a bad face for not playing. In training sessions, every single action is positive. Everyone – look forward, don't regret.

"He is a huge competitor, he is a guy who scores incredible goals, so fast, defensively so strong.

"It's a reality that he played at Old Trafford, he played here. Against incredibly top teams he was there, always playing at a high level.

"I don't want to say anything wrong, but Gareth Southgate has an incredible talent for the national team in his hands. I saw many players in my life, training with incredible players and Phil will be one of them."

Foden's fellow academy graduate Eric Garcia returned to action after suffering a concussion in the 3-0 win against Arsenal and recovered well from a shaky start at centre-back after Mohamed Salah hit the post during a deceptively strong Liverpool start.

"He played against Salah and [Sadio] Mane. He's 19, he had a kick against Arsenal, was training for three or four days after 10 days out and he was awesome," Guardiola added.

"He doesn't make mistakes. He is always focused, he guides the line, he knows what he has to do.

"As a club, we are so proud to have Phil and Eric. We can count on them, without a doubt."