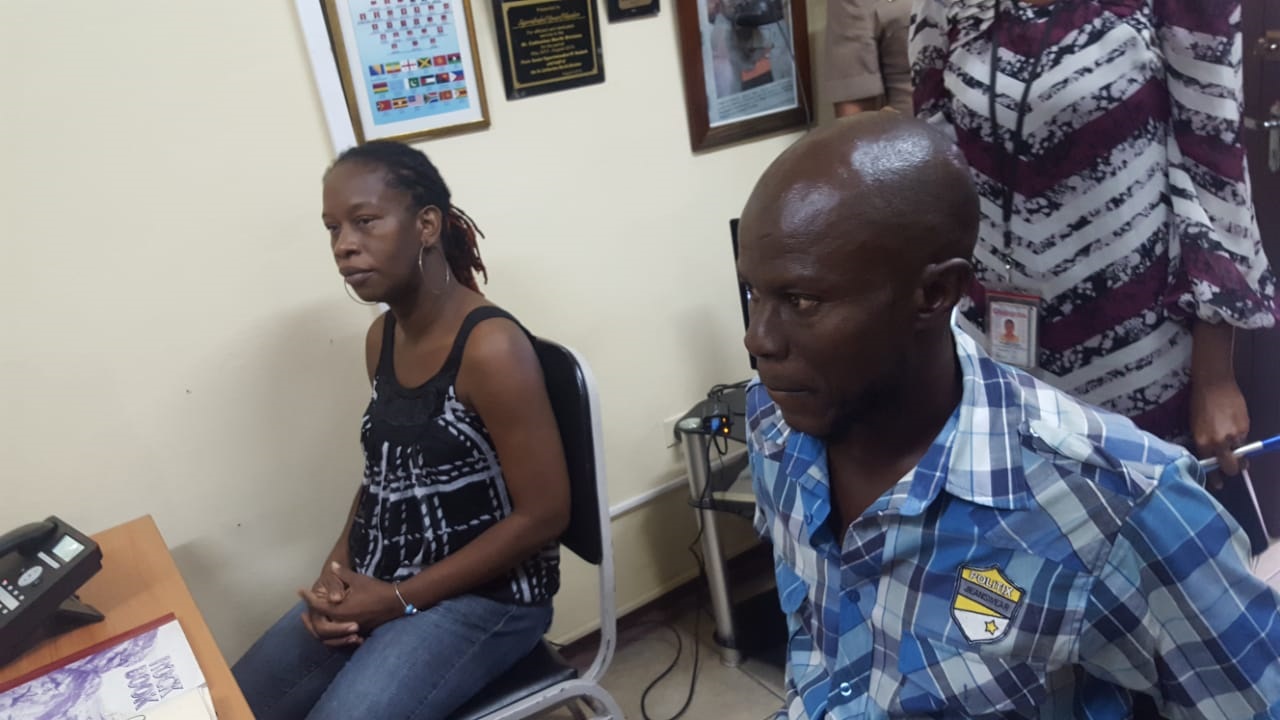 Suzette Whyte and Sinclair Hutton, mother and father of the baby that was stolen from the Victoria Jubilee Hospital last month, speak with officers at the Denham Town Police Station on Thursday.

The police have indicated that based on their investigations, they have reasons to believe that the recent stealing of a baby from the Victoria Jubilee Hospital in downtown Kingston was part of an organised child-stealing ring.

On January 9, the child’s mother left the baby on her bed at the hospital to take a shower. On her way to the shower, she reportedly passed a woman inside the ward looking on the outside through a window, who engaged her in a conversation.

On her return to the ward, the mother discovered that both her baby and the woman were missing.

For the police, the pieces of a big puzzle have been slowly coming together.

“It’s early days yet, but our investigations have opened up a whole can of worms,” said Howard Chambers, the Superintendent in charge of the Kingston Western Police Division in which the Victoria Jubilee Hospital is located.

“Based on what we are seeing, this could be a child-stealing ring,” added the superintendent, noting that the suspect was found with fictitious documents for the baby.

The senior cop made the comments while meeting with the elated father and mother of the child at the Denham Town police station hours after confirmation came that DNA testing had established that a baby that was taken for processing at the Registrar General’s Department (RGD) in Twickenham Park, St Catherine on Tuesday of this week, was the stolen child.

A woman who took the child to the RGD was taken into custody, and the child was recovered.

“Right now words cannot express how I feel, I am more than happy,” said Sinclair Hutton, the father of the baby, at the police station.

“I just have to give God thanks right now. I just want to see my baby,” said Suzette Whyte, the mother of the child.

While speaking, she paused, clearly thinking deeply about the month-long ordeal and the subsequent development.

The police said they hope that the parents will be reunited with the baby by Friday.

“Right now we are continuing our investigation, but we just want to thank all of the persons who assisted,” said Superintendent Chambers.

He said members of the public were instrumental in the process, as they shared vital information with the police since the child went missing.

The police said as they continue their probe, several questions will have to be answered about how persons were able to enter the hospital and leave with the child even though there was security at the facility.

The police said they are not dismissing the notion that the perpetrator got help from inside the facility.

They said the suspect who was held with the baby is to face an identification parade.