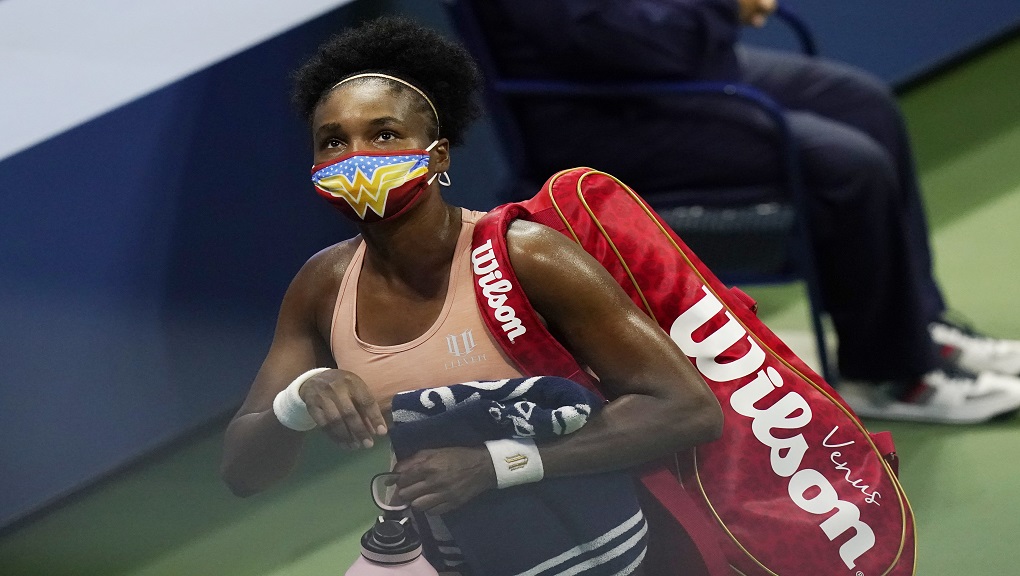 Venus Williams, of the United States, leaves after her match with Karolina Muchova, of the Czech Republic, at the U.S. Open tennis championships, Tuesday, Sept. 1, 2020, in New York. Muchova won the match. (AP Photo/Frank Franklin II).

Serena Williams and second seed Sofia Kenin flew the American flag on day two of the US Open, while Garbine Muguruza also made a winning start in New York.

Former world number one and third seed Williams overcame Kristie Ahn in straight sets in the first round at Flushing Meadows on Tuesday.

Muguruza – the 10th seed – topped Nao Hibino but Venus Williams suffered her first opening-round loss at the US Open.

Williams started her latest bid for a 24th grand slam crown with a 7-5 6-3 success against countrywoman Ahn in their first-ever meeting.

In both sets, Williams found herself down 2-0 but she rallied in the first and second – the six-time US Open champion reeling off five successive games and six of the last seven en route to the second round.

Williams, who hit 28 winners, will next face Margarita Gasparyan for a spot in the third round after breaking the record for most singles wins (102) in US Open history.

Playing for the first time since claiming her maiden slam at Melbourne Park at the start of the year, Kenin dispatched Belgian Wickmayer 6-2 6-2.

"Of course, I think it's a really good win, good boost for my confidence," Kenin said. "I played really well. I focused on my key elements of the game."

Australian Open runner-up Muguruza made a slow start but the two-time major champion was still too good for Hibino 6-4 6-4 in one hour, 30 minutes.

An ankle injury meant Muguruza missed last week's Western & Southern Open, however, the Spanish star finally got into full flow in her first appearance since the shutdown due to coronavirus.

"I was happy to go on the court," said Muguruza, who will take on Tsvetana Pironkova in the next round. "Of course, you know, the lack of matches, it's there."

For the first time in 22 appearances, Venus Williams lost in the opening round of her home grand slam.

A two-time US Open champion, Williams – who broke the record for most tournament appearances with 22 – lost 6-3 7-5 to 20th seed Karolina Muchova.

Meanwhile, 2017 champion Sloane Stephens made it through, but former world number one and three-time US Open winner Kim Clijsters was denied victory in her first major tournament since retiring in 2012 – ousted 3-6 7-5 6-1 by 21st seed Ekaterina Alexandrova.

US Open 2020: Zverev, Tsitsipas advance as Djokovic cruises in NY

Defending champion Andreescu opts out of US Open