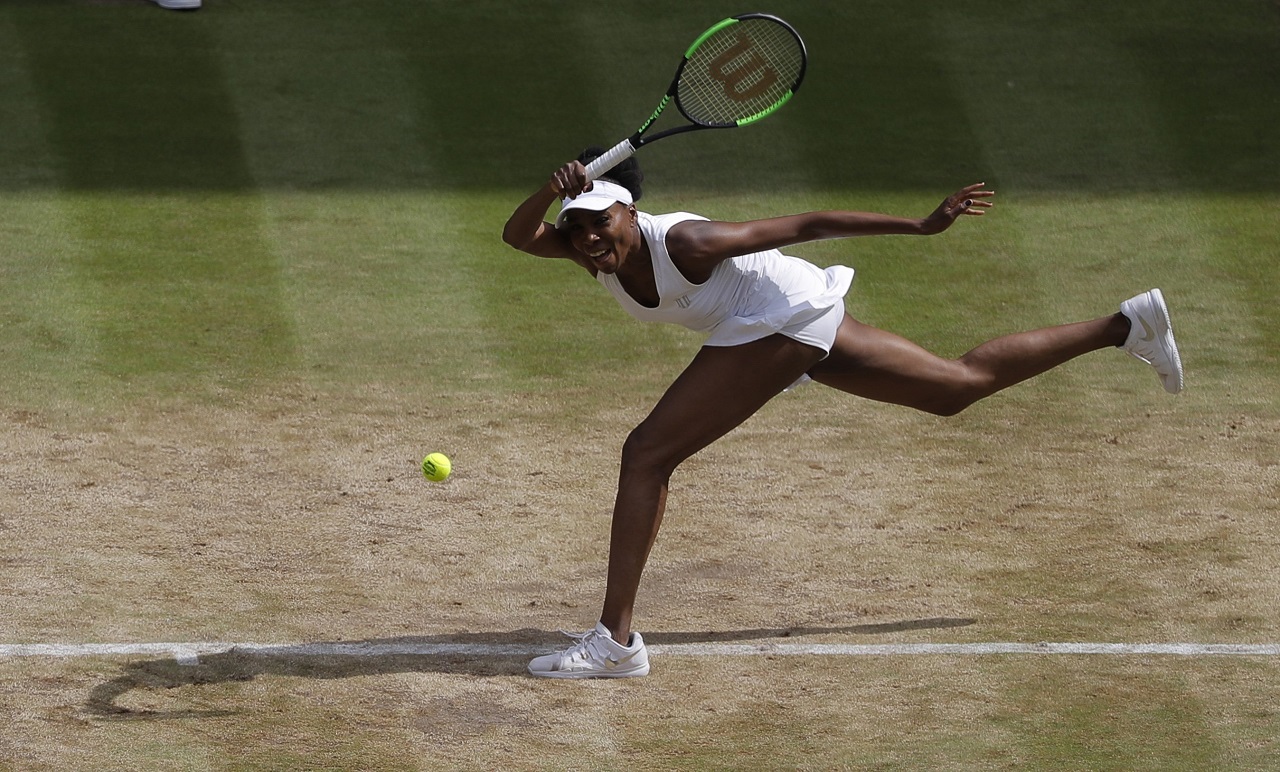 Venus Williams of the United States returns to Britain's Johanna Konta during their Women's Singles semifinal match on day nine at the Wimbledon Tennis Championships in London Thursday, July 13, 2017.

All these years later, Wimbledon still brings out the best in Venus Williams.

With her latest display of gutsy serving and big hitting, Williams beat Johanna Konta 6-4, 6-2 on Thursday to reach her ninth title match at the All England Club and first since 2009.

At 37, Williams is the oldest Wimbledon finalist since Martina Navratilova was the 1994 runner-up at that age.

"I couldn't have asked for more, but I'll ask for a little more. One more win would be amazing," Williams said. "It won't be a given, but I'm going to give it my all."

She will be seeking her sixth Wimbledon championship and eighth Grand Slam singles trophy overall. Her most recent came in 2008, when she defeated her younger sister, Serena, for the title at the All England Club. A year later, she lost the final to Serena.

In the time since, Williams revealed that she was diagnosed with Sjogren's syndrome, which can sap energy and cause joint pain. As time went on, there were questions about whether she might retire, especially after a half-dozen first-round losses at major tournaments. But she kept on going, and lately has returned to winning.

Her resurgence began in earnest at Wimbledon a year ago, when she made it to the semifinals. Then, at the Australian Open in January, Williams reached the final, where she lost to — yes, you guessed it — her sister. Serena is off the tour for the rest of this year because she is pregnant.

On Saturday, the 10th-seeded American will participate in her second Grand Slam final of the season, and 16th of her career, this time against 14th-seeded Garbine Muguruza of Spain.

"She knows how to play, especially Wimbledon finals," Muguruza, the 2015 Wimbledon runner-up and 2016 French Open champion, said about Williams. "It's going to be, like, a historic final again."

Williams arrived in England a few weeks after being involved in a two-car accident in Florida; not long afterward, a passenger in the other vehicle died. At her initial news conference at Wimbledon, a tearful Williams briefly left the room to compose herself after being asked about the crash.

She has tried, coach David Witt said, to "just focus on the tennis."

In the semifinals, it was Konta who had the first chance to nose ahead, a point from serving from the opening set when it was 4-all and Williams was serving down 15-40.

Williams erased the first break point with a backhand winner down the line, and the second with a 106 mph (171 kph) second serve that went right at Konta's body. It was a risky strategy, going for so much pace on a second serve, but it worked. That opened a run in which Williams won 12 of 13 points.

She wouldn't face another break point and produced another impressive second serve — in the second set, at 103 mph (166 kph), it went right at Konta, who jumped out of the way.

Konta played quite well, especially early, and finished with more winners, 20 to 19, each greeted by roars from the Centre Court spectators.

This was her 10th semifinal in 20 Wimbledon appearances; Konta had never been past the second round at the grass-court tournament before this year.

In the other semifinal, Muguruza won 15 of the first 20 points en route to a 5-0 lead. Even though Rybarikova entered having won 18 of her past 19 grass-court matches, mostly at lower-level tournaments, she suddenly looked a lot more like someone whose career record at Wimbledon before last week was 2-9.

"Not my best day," Rybarikova said. "But she didn't give me much chance to do something."

That earned the 23-year-old Muguruza a berth in her third career Grand Slam final, second at the All England Club. She lost to Serena Williams with the title on the line at Wimbledon in 2015, then beat her at Roland Garros last year.

"I'll have to ask Serena for some pointers," Venus Williams said. "Serena's always in my corner. And usually it's her in these finals, so I'm trying my best to represent 'Williams' as best as I can."