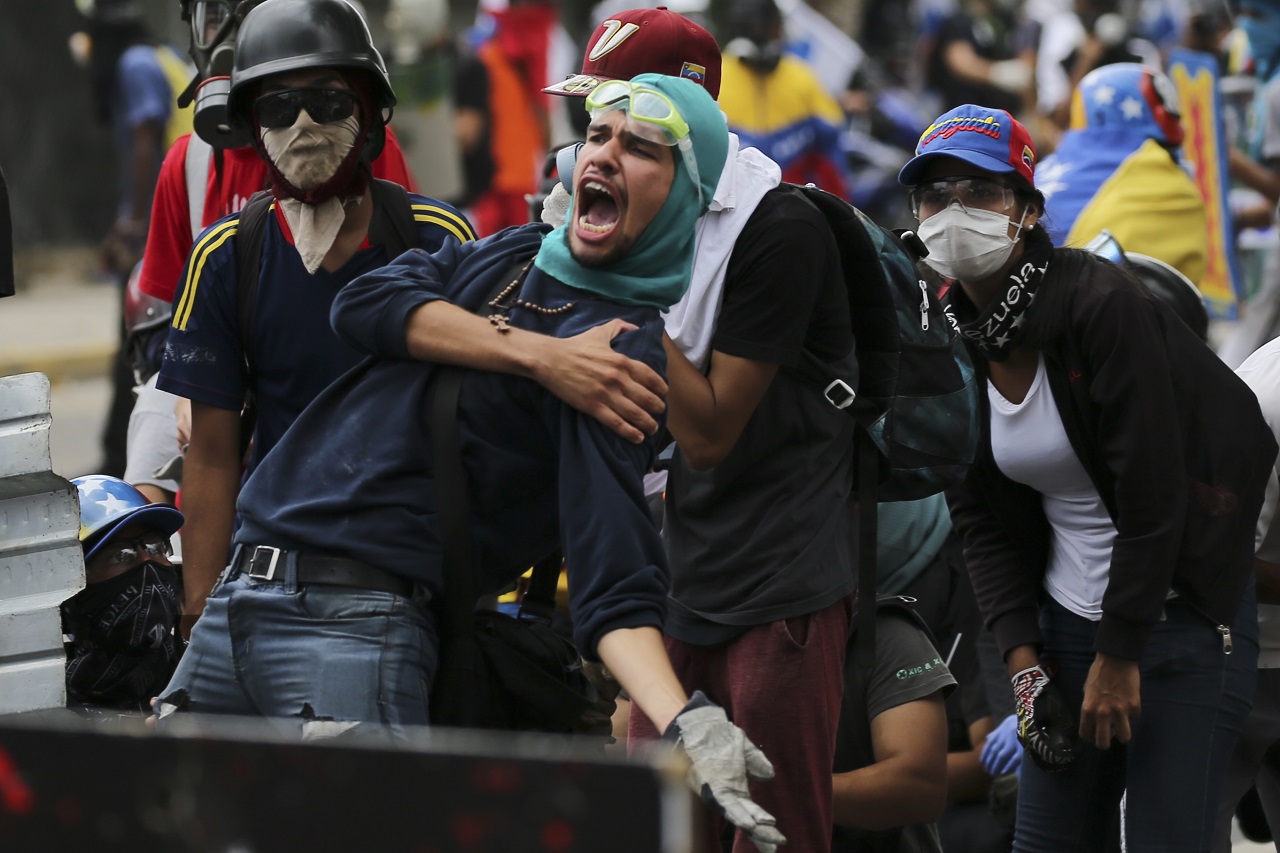 An anti-government protester screams at security forces blocking a march to the Supreme Court to oppose President Nicolas Maduro's plan to rewrite the constitution, in Caracas, Venezuela, Saturday, July 22, 2017.

A few thousand protesters attempted to reach Venezuela's Supreme Court Saturday before clashing with national guardsmen and largely dispersing by late afternoon — a disappointing turnout for opponents of President Nicolas Maduro eight days before he launches the rewriting of the country's constitution.

The opposition said millions participated in a symbolic vote last week against the constitutional rewrite, and millions more in a nationwide strike on Thursday. Saturday's showing, however, was a faint echo of the hundreds of thousands who once showed up for marches against Maduro, who says the remaking of the constitution will not be stopped.

The government also appeared to strike back against another challenge to its authority, detaining one of the 33 people named to the supreme court by the country's opposition-controlled congress.

Congressional leader Julio Borges said on Twitter that Saturday's detention of Angel Zerpa was part of a "persecution by the dictatorship" of President Nicolas Maduro.

The socialist government had not said why Zerpa was detained.

Congress on Friday voted to replace the entire government-stacked supreme court with 33 new judges, including Zerpa, as part of a growing challenge to the government's legitimacy.

The court and the government said the replacement is invalid and unconstitutional.

Organizers had hoped that Saturday's demonstration would send a forceful message to Maduro to cancel a July 30 election for delegates to an assembly to overhaul the constitution. The opposition fears Maduro and his backers will use the assembly to eliminate all checks and balances on the ruling socialist party.

Several people were injured during the demonstration, including violinist Wuilly Arteaga, who has become a symbol of nearly four months of anti-government protest. Images broadcast on local television showed emergency workers tending to the young musician as he bled from the nose and left cheek. His shirt and baseball cap with the red, yellow and blue colors of the Venezuelan flag were also stained with blood.

"Whatever happens, we are going to continue in this fight," he said later in a video posted on his Twitter account, his lip swollen and face bandaged.

A few thousand turned out in opposition strongholds in eastern Caracas, and elsewhere in the city there were hundreds or dozens.

National guard troops launched tear gas in at least one location in Caracas, blocking protesters with clouds of white gas and rows of officers on motorcycles. Demonstrators threw rocks and firebombs at the national guard.

Venezuelan authorities have routinely used tear gas and rubber bullets against nearly four months of street protests, during which at least 97 people have died and thousands have been injured or detained.

Maduro has shown no sign of giving in, saying the constitutional rewrite will help solve Venezuela's political standoff and dire economy.

In Washington, President Donald Trump's administration threatened this week to take "strong and swift economic actions" if Maduro proceeds with the constitution rewrite.