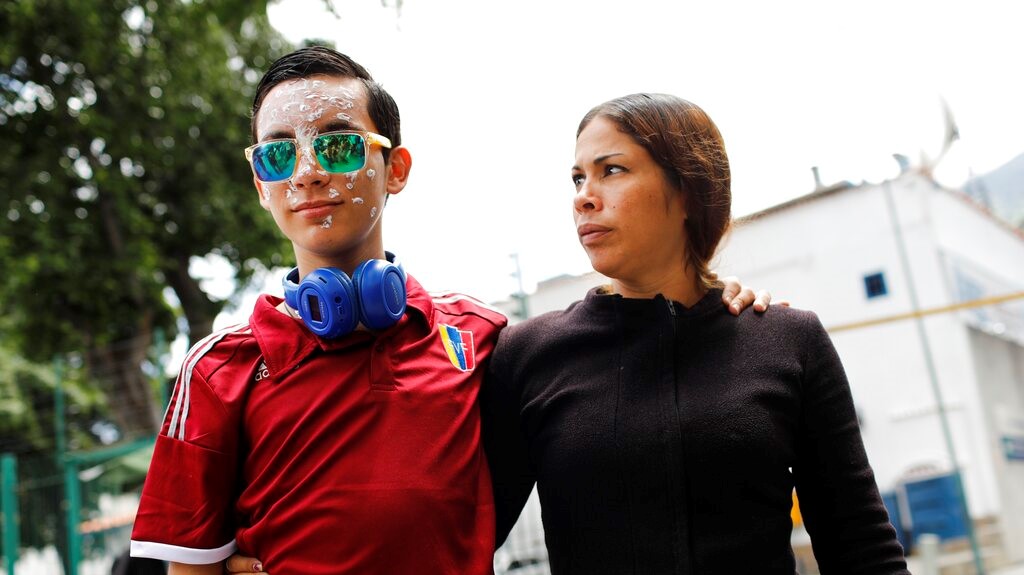 16-year-old Rufo Chacon, wearing reflective sunglasses, faces towards his mother Adriana Parada as they are met by a group of reporters outside the offices of Foro Penal, a Venezuelan human rights organization, in Caracas, Venezuela, Friday, July 19, 2019. (AP Photo/Ariana Cubillos)

A Venezuelan teenager who lost his eyesight when he was hit by police buckshot during a protest said Friday that he wants to continue studying.

Wearing reflective sunglasses, 16-year-old Rufo Chacón also spoke about difficult living conditions in his home state of Táchira, where he was injured during a demonstration over a lack of cooking gas early this month. Asked what he likes to eat, he smiled and said chocolate and ice cream are his favourites.

And he described a new life without sight.

"You see continuous darkness," Chacón told journalists outside the Caracas office of Foro Penal, a human rights group. "It's like having your eyes shut and seeing nothing, absolutely nothing."

Chacón's story stands out, even in a country with seemingly countless cases of deprivation and suffering. Images of the boy grimacing and clutching his bloodied face right after he was sprayed with police pellets circulated widely on social media, causing revulsion among many Venezuelans accustomed to years of economic hardship and political conflict.

On Friday, the United States announced sanctions on four officials of Venezuela's military intelligence unit, saying the action was linked to the death of Capt. Rafael Acosta Arévalo, a Venezuelan navy officer allegedly tortured in state custody. The restrictions, which follow similar measures against Maduro and more than 100 other Venezuelan officials, freeze any U.S. assets that the men have and bar them from doing business with Americans.

Venezuela's human rights record fell under more scrutiny after a scathing report about abuses issued by Michelle Bachelet, the U.N. High Commissioner for Human Rights who visited the country in June. Venezuelan authorities said the report was biased and ignored a record of violence by the opposition, whose attempt to stage a military rebellion on April 30 failed.

This week, authorities in Venezuela released a young musician who was jailed six weeks ago after venting her frustration with Maduro's government on social media. Karen Palacios had been held at a military prison and accused of inciting hate under a law passed by a pro-Maduro congress in 2017.

Two police officers have been arrested for "cruel" conduct in Chacón's case, according to the attorney general's office in Venezuela. However, Alfredo Romero, the head of Foro Penal, said the suspects had not been transferred away from their unit and to a prison in line with a judicial order.

On Friday, Chacón appeared composed. There were dabs of cream on his face, to heal wounds from the police projectiles. After the shooting, medics plucked pellets from his eye sockets.

His mother, Adriana Parada, said her son has good and bad days. She blamed Venezuela's problems on its government and said she gets angry sometimes when she thinks about her son's plight.

She said Chacón needs a medical procedure for prosthetic eyes.

Yet she also talked about what seems impossible.

"As a mother, I have to make my son see again," she said.