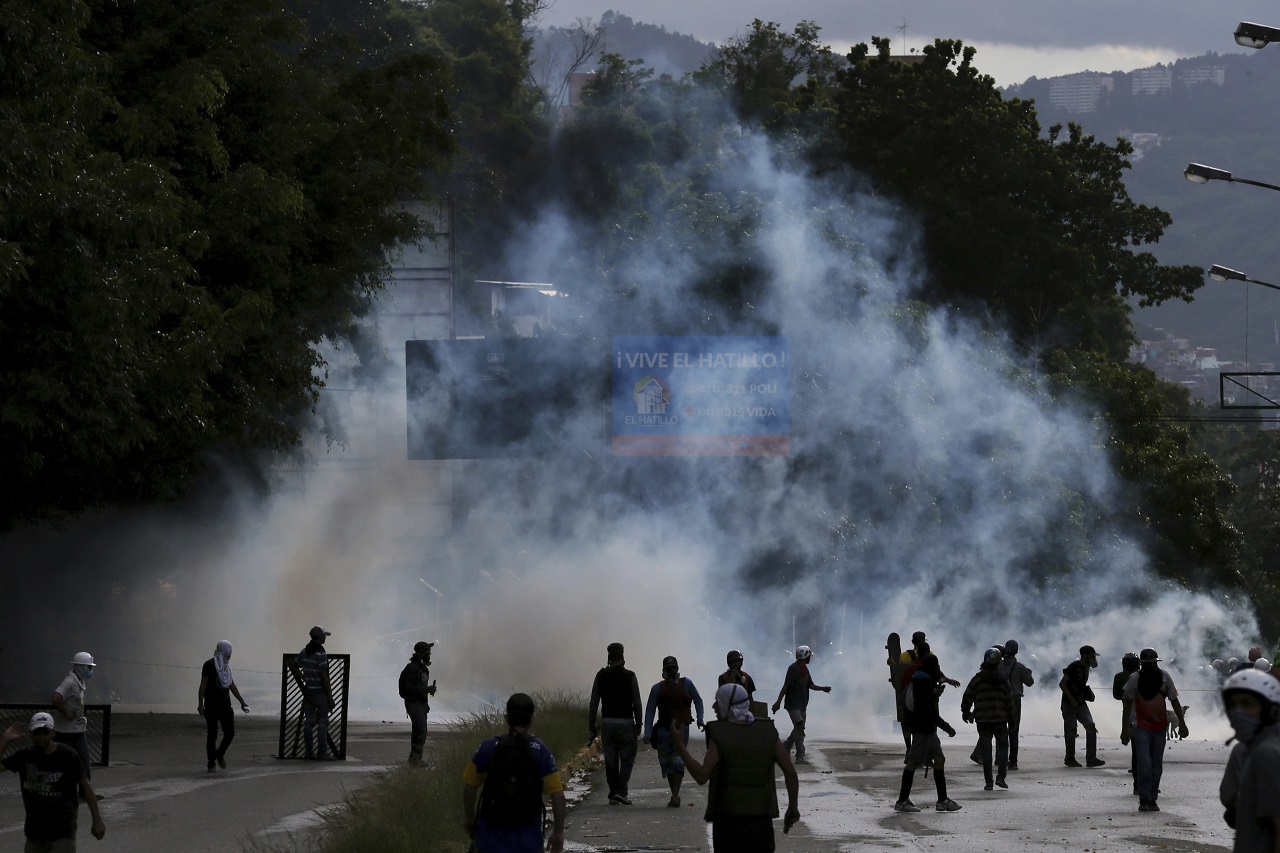 Demonstrators walk amid tear gas fired by Bolivarian National Guards during clashes in the El Hatillo neighbourhood on the outskirts of Caracas, Venezuela, Thursday, July 20, 2017.

A nationwide strike against plans to rewrite the constitution shut down much of Venezuelan's capital Thursday before erupting into sporadic violence that left at least two young men dead.

President Nicolas Maduro pledged to forge ahead with reshaping Venezuela's government despite the protests and a U.S. threat to levy economic sanctions if he continued.

A coalition of opposition groups called what it described as a "great march" for Saturday, returning to a strategy of direct confrontation with the government after a week of alternative tactics like organizing a nationwide protest vote against the constitutional rewrite.

In New York, a senior diplomat resigned from the Venezuelan delegation to the U.N. in what he called a protest of the Maduro's administration's widespread human rights violations.

Isaias Medina told The Associated Press he could no longer tolerate working for a government that advocates for human rights at the U.N. and violates them at the same time. He is among the few members of Venezuela's government outside the opposition-controlled National Assembly to have broken ranks with it.

"He needs to respond now before the international community," Medina said.

U.N. Ambassador Rafael Ramirez said on Twitter that Medina had acted dishonestly and been removed from his post.

In Caracas, wealthier, pro-opposition neighborhoods in the eastern part of the city were shuttered and silent until early afternoon, when improvised blockades left them almost entirely cut them off from the rest of the city. Groups of masked young men set fire to a handful of blockades and hurled stones at riot police, who fired back tear gas.

The chief prosecutor's office said 23-year-old Andres Uzcategui was killed in a protest in the working-class neighborhood of La Isabelica in the central state of Carabobo and 24-year-old Ronney Eloy Tejera Soler was killed in the Los Teques neighborhood on Caracas' outskirts. At least nine people were hurt in protests, the prosecutor's office said. It offered no details about the circumstances of the killings.

The slaying drives the death toll over nearly months of protests to at least 95.

A public transport strike appeared to have halted nearly all bus traffic and thousands of private businesses defied government demands to stay open during the first major national strike since a 2002 stoppage that failed to topple Maduro's predecessor Hugo Chavez.

Maduro said on national television that he'll press ahead with plans to rewrite the nation's constitution and said that hundreds of Venezuela's largest companies are functioning "at 100 percent" despite the strike. Opposition leaders said Thursday evening that 85 percent of the nation's workers had participated in the strike.

Neither figure could be independently verified.

In neighborhoods of western Caracas traditionally loyal to the ruling party, some stores were closed but bakeries, fruit stands and other shops were open and hundreds of people were in the streets, although foot and vehicle traffic were about half of what they would be on a normal weekday.

In the rest of the city, residents commented that the streets were emptier than on a typical Sunday.

The 24-hour strike was meant as an expression of national disapproval of Maduro's plan to convene a constitutional assembly that would reshape the Venezuelan system to consolidate the ruling party's power over the few institutions that remain outside its control. The opposition is boycotting the July 30 election to select members of the assembly.

"Definitively, we need a change," said teacher Katherina Alvarez. "The main objective is for people to see how dissatisfied people are."

Many of those who opted to work said they walked hours to get to their jobs, unable to find a bus or taxi.

"We urgently need a change in government, because what we are living through is pathetic," said Frangeli Fernandez, 24, an accountant who walked three hours to his job at a bank.

Although not entirely in agreement with the strike, Fernandez said he agreed with doing something "very radical to get out of this."

Walking through the streets of Venezuela's capital Thursday, opposition leader Henrique Capriles called on people at roadblocks to allow ambulances and other emergency vehicles through. Protesters across Caracas set up roadblocks of tree branches and tires to protest Maduro's plans to change the constitution.

Some residents were irritated by the roadblocks, saying the protest was yet another way the country's political upheaval is disrupting their lives.

"The government jails the people who protest and those who are protesting are caging the rest of us. It's unfair," said Maria Sandoval, a 27-year-old medical secretary.

Medina, the U.N. diplomat, said he decided he would resign from his post shortly after opposition protests began in early April following a Supreme Court decision stripping the National Assembly of its remaining powers. He said he has never identified with either government or opposition parties, but was irked by images of national guardsmen and police launching tear gas and rubber bullets at protesters, many of them young students.

He did not immediately resign because he wanted to finish organizing a U.N. environmental conference and needed his passport. He made the decision official in a letter and video shared widely on social media Thursday.

In the video, Medina said government leaders responsible for violence against protesters "will be considered murderers."

"I'm ready to stand forward and say what I'm saying because it's the correct thing to do," he added.

A small handful of high-ranking Venezuelan officials have turned against Maduro since the crisis emerged, state prosecutor Luisa Ortega Diaz chief among them. The longtime government loyalist has now become one of Maduro's most outspoken critics as he moves closer to leading a rewrite of the constitution.