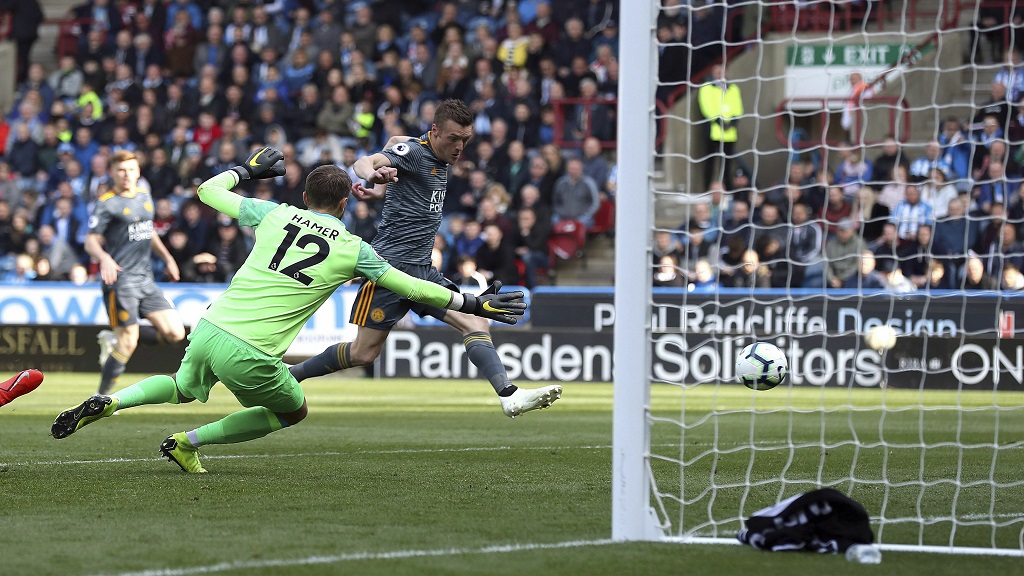 Jamie Vardy scored twice as Leicester beat Huddersfield 4-1 on Saturday to make it four successive wins in the Premier League.

Aaron Mooy scored the only goal for already relegated Huddersfield on the day he met an American girl who gained inspiration from the midfielder's shaven head during her cancer treatment.

Tielemans curled in the opener from 20 yards in the 24th minute before Vardy latched onto Ricardo Pereira's pass and produced a fine finish three minutes into the second half.

But Maddison sealed the game with a free-kick in the 79th and Vardy then converted in the 84th from the spot after being hauled down by Terence Kongolo.

Leicester climbed to seventh in the league.

Huddersfield's special guest, seven-year-old mascot Bella from Texas, was flown over from Dallas after revealing that Mooy was her unlikely hero during last summer's World Cup after she lost her hair during treatment for brain cancer.

AT THE VITALITY STADIUM: Burnley moved eight points clear of the relegation zone with a come-from-behind 3-1 win over Bournemouth.

Ashley Barnes atoned for an early own goal by adding to quickfire first-half strikes from Chris Wood and Ashley Westwood as Sean Dyche's men sealed a second straight victory that lifts them comfortably away from next weekend's opponents Cardiff City.

Bournemouth were clearly second best after letting their lead slip amid a frenetic opening 20 minutes and, outside of a wayward Callum Wilson header, offered little response on the way to a sixth loss in nine matches.

Asmir Begovic, recalled for last weekend's loss to Leicester City, was at fault for two Burnley goals and his team has now failed to win any of its last four home fixtures.