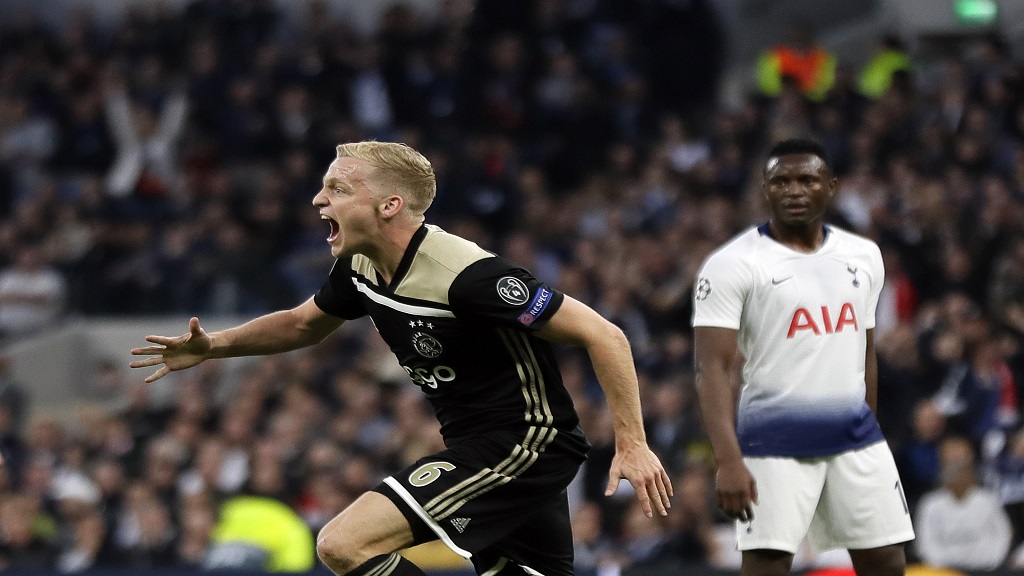 Donny van de Beek gave youthful Ajax a 1-0 win over Tottenham in the first leg of their Champions League semifinal on Tuesday, edging the Dutch side toward a first European Cup final in 23 years.

A Tottenham side depleted by injuries and suspension gifted the visitors too much space to string together slick passes early on, and the 22-year-old Van de Beek ghosted into the penalty area to receive a through ball from Hakim Ziyech before knocking a shot past goalkeeper Hugo Lloris in the 15th minute.

Overwhelmed in the first half, Tottenham were more assertive after the break against the 1995 champions but lacked the attacking end product to equalize with Harry Kane injured and Son Heung-min suspended.

The hosts, contesting their first European Cup semifinal in 57 years, also had to contend with the loss of defender Jan Vertonghen in the first half with an injury that threw a fresh spotlight on soccer's handling of suspected concussions.

Vertonghen challenged for a header in the Ajax area but slammed his face into the back of teammate Toby Alderweireld's head, leaving him with blood pouring from a cut on his nose in the 32nd minute. Vertonghen received treatment on the field and went to change his bloodied white jersey.

Referee Antonio Mateu Lahoz was pointing at his head as he spoke to Vertonghen, before allowing him to return to action in the 38th minute.

Vertonghen lasted only 40 seconds before going across to the sideline, leaning over and struggling to stand. Tottenham manager Mauricio Pochettino had to grab Vertonghen to stop him from keeling over before the Belgian was helped down the tunnel by two medical officials.

Vertonghen could miss the trip to Amsterdam to face his former club next Wednesday.

Barcelona host Liverpool in the other semifinal Wednesday.