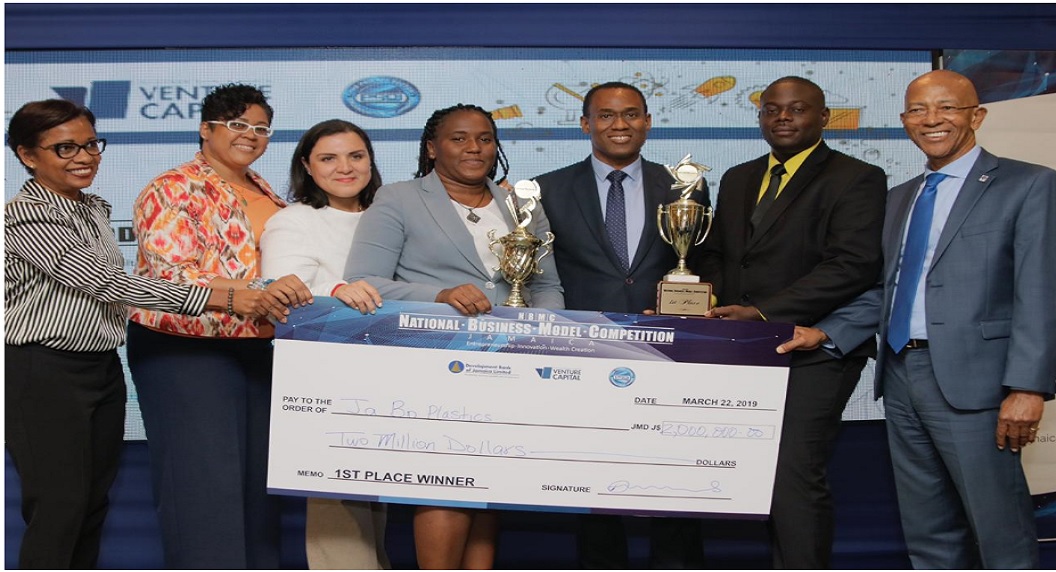 Jordon Freeman and Samantha Williams, two students from the University of the West Indies students have emerged winners of the National Business Model Competition 2019 and cash prize of $2 million.

The students copped the award for their business venture, Ja-Bio-Plastics which proposes a natural, degradable and compactable alternative to plastic. The concept is in keeping with the government’s recent plastic ban.

In addition to the cash prize, Ja-Bio-Plastics founders will also get an all-expense paid trip to defend Jamaica’s 2018 global championship at the upcoming International Business Model Competition (IBMC) at the Brigham Young University campus in Provo, Utah, United States.

Founding partner, Freeman, said the company will use the $2 million to analyse material for quality assurance.

Copping the prize for second place was Re-Draft from the Northern Caribbean University. The team members walked away with a cash prize of $1,000,000. University of the West Indies’ PreeLabs placed third for the cash prize of $500,000; while Xermosol from the University of Technology was named the fourth prize winner of $200,000.

All the teams, including C2ML and Ja Scent from the University of Technology, will advance to the international level of the competition from a total of 15 entrants.

This year’s staging of the IBMC will be held on Friday, May 10. Teams from scores of universities and business schools across the globe will compete for the grand cash prize ofUS$40,000 and the prestigious IBMC trophy, now housed at its current home at Northern Caribbean University’s Morris Centre of Entrepreneurship.

Last year, Beasc Technologies from Northern Caribbean University won the IBMC, taking home the Global Champion trophy and US$30,000. Eco-Structures, representing the University of the West Indies, was awarded second place receiving a cash prize of US$20,000; and Queritel, the third team from Jamaica, placed in the top 10 out of 42 universities worldwide.

The National Business Model Competition, which is now in its sixth year, is organized at the local level by the Development Bank of Jamaica (DBJ) through its Jamaica Venture Capital Programme and the Private Sector Organisation of Jamaica.

Geared at reducing the failure rate of start-up businesses, the National Business Model Competition focuses on assessing customer interactions then pivoting and changing course based on the lessons learned.