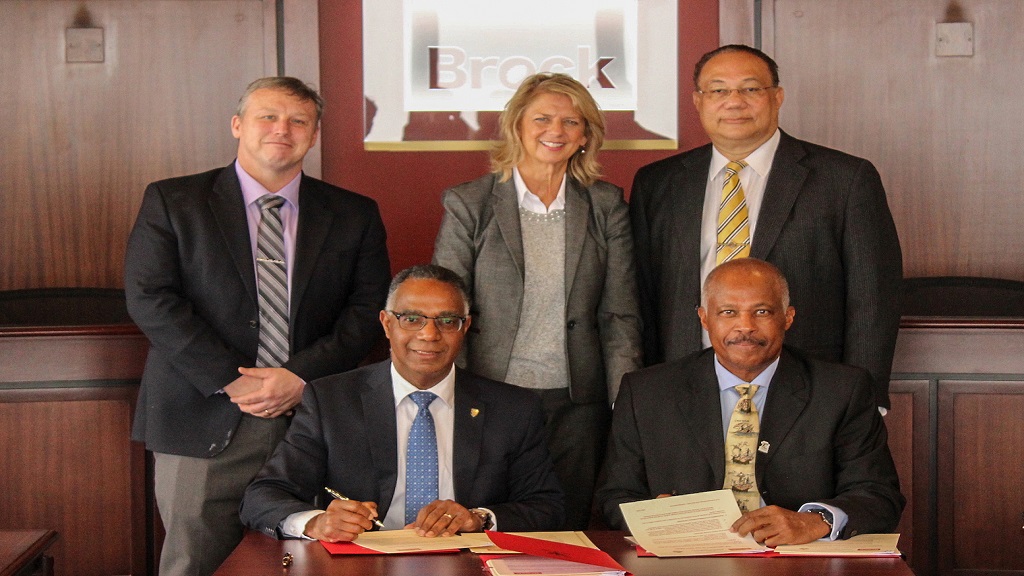 The University of the West Indies (UWI) and Brock University in Canada have signed a memorandum of understanding to open discussions for the establishment of an institute for Canada-Caribbean Studies.

The occasion, hosted at the Brock campus in the Niagara region, Ontario also marked the renewal of two existing MoUs, which serve to promote international and intercultural understanding, academic linkages and enrich the cultural understanding of both universities. They will also continue to provide mobility opportunities for faculty, staff and students as well as joint research activities between the two institutions.

The new Institute for Canada-Caribbean Studies will be the latest addition in a cluster of international centres launched by UWI in Africa, the US, China and South America.

It demonstrates another tangible implementation of the regional university’s thrust to globalise; a key objective framed within its Triple A Strategy (Strategic Plan 2017-2022). This focus, in fact, earned  UWI recognition in the Times Higher Education World University Rankings 2019, for its international outlook which placed it among the top 10 per cent of universities worldwide in this category.

Emphasising the significance, UWI Vice-Chancellor, Professor Sir Hilary Beckles stated, “This was an initiative which I placed before Brock’s President Fearon when he visited our Regional Headquarters last year. He was very keen to think outside the box and bring his expertise to bear on creating a new trajectory.” An economic historian, Vice-Chancellor Beckles also noted that “Canada has been a most reliable supporter of Caribbean nation building” and elaborated further that “the economic history of the region shows the centring of Canada in Caribbean development.”

In an effort to provide academic and research leading to this relationship, Beckles proposed that an “institution be created in order to establish the academic integrity of the relationship, and sustain the intimacy of the bond between the two regions.”

Commenting on the initiative, Ambassador Bernal noted, “Canada has been a very supportive partner for the Caribbean over a very long time and there are important investment, trade and tourism linkages. This valuable relationship needs to be reviewed and refreshed by policy based on multi-disciplinary research which is the purpose of the Institute for Canada-Caribbean Studies.”

This most recent collaboration builds upon a rich history between UWI and Brock.

More deeply, Canada has played a key role in the development of UWI, including funding support for the construction of residences on the Mona and St. Augustine campuses. UWI in 2013 was also beneficiary of a $20-million grant to support strengthening distance education in the Caribbean through UWI Open Campus.