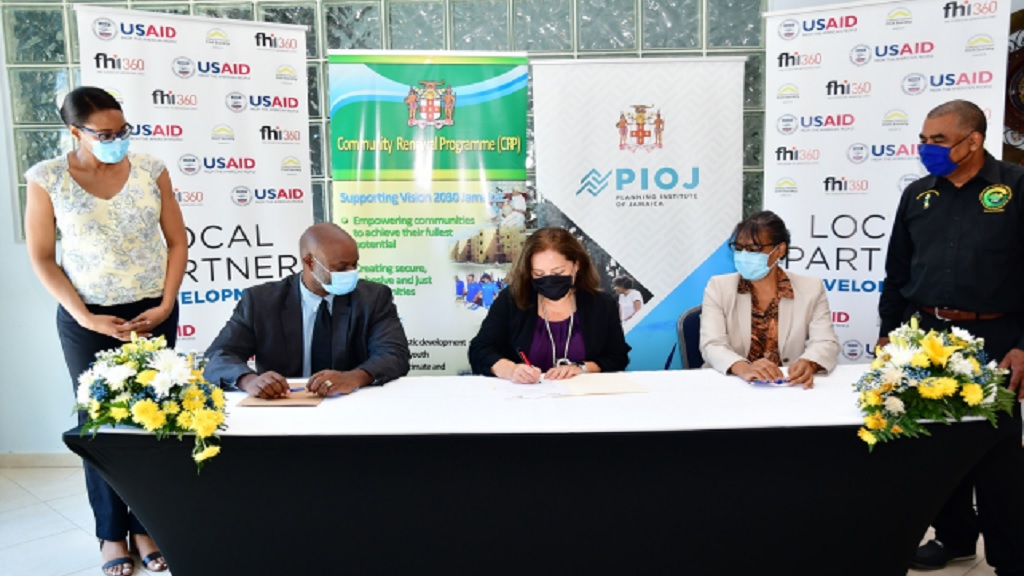 The United States Agency for International Development (USAID) through Local Partner Development (LPD), and the Planning Institute of Jamaica (PIOJ) has officially signed a grant agreement, valued at approximately J$38 million, to support the Partnership Towards Youth Crime and Violence Prevention in Montego Bay project.

The project is designed to help 100 unattached and high-risk youth between the ages of 14 and 29 from the communities of Salt Spring and Flanker in Montego Bay, St James, reduce youth crime risk levels and improve their employability.

The grant signing was officially held August 28 in Kingston at the LPD project offices. The PIOJ-led project comes at a critical juncture and builds on current and past initiatives in the communities. According to PIOJ data, St James has consistently been listed among the top five parishes with the highest homicide rates since 2014 and young men in particular, continue to be the primary perpetrators of violence in the parish.

Having collaborated with several service delivery agencies in the parish, the PIOJ through the government’s Community Renewal Programme (CRP) has been implementing the project since April this year. Among the CRP objectives is the intent to rehabilitate high crime communities through the provision of a platform for the coordination and enhancement of the delivery of government and civil society services to volatile and vulnerable communities. Salt Spring and Flanker were determined by a set of criteria to be among Jamaica’s 100 most vulnerable and volatile communities that have been identified for immediate prioritisation.

Manager of the Community Renewal Programme, Charles Clayton said, “The grant has enabled the PIOJ, through the CRP, to effectively support the implementation of a key component of a participatory action plan developed in collaboration with community members and agencies that are supporting the CRP’s multi-level and multi-sectoral collaborating framework. Prior to this grant from USAID this had seemed close to impossible, due to a lack of resources.”

He added that this type of support is desperately needed to assist “participating agencies that experience difficulty in identifying funding to implement their planned interventions.”

The “Partnership Towards Youth Crime and Violence Prevention in Montego Bay” project utilizes an intensive case management approach. The interventions are aimed to reduce risky behaviour that generate a greater susceptibility for youth within these communities; pulling from a comprehensive array of community support services as the keys to reducing the risk of violence. Interventions include life and coping skills training, counselling, cognitive behavior therapy, education-based training, mentorship, livelihood opportunities, among other individualized care services.

Built on the notion of sustainability, the CRP hopes to replicate the project across other CRP communities. The initiative forms part of LPD’s broader mandate to build the capacity of Jamaican institutions to become more effective in advancing collaborative, evidence-based youth crime and violence prevention strategies.

With the LPD’s support, civil society organizations and key public and private partners will be better able to mobilize and sustain targeted and effective prevention efforts. LPD is a six-year activity that is funded by USAID and is being implemented by FHI 360.