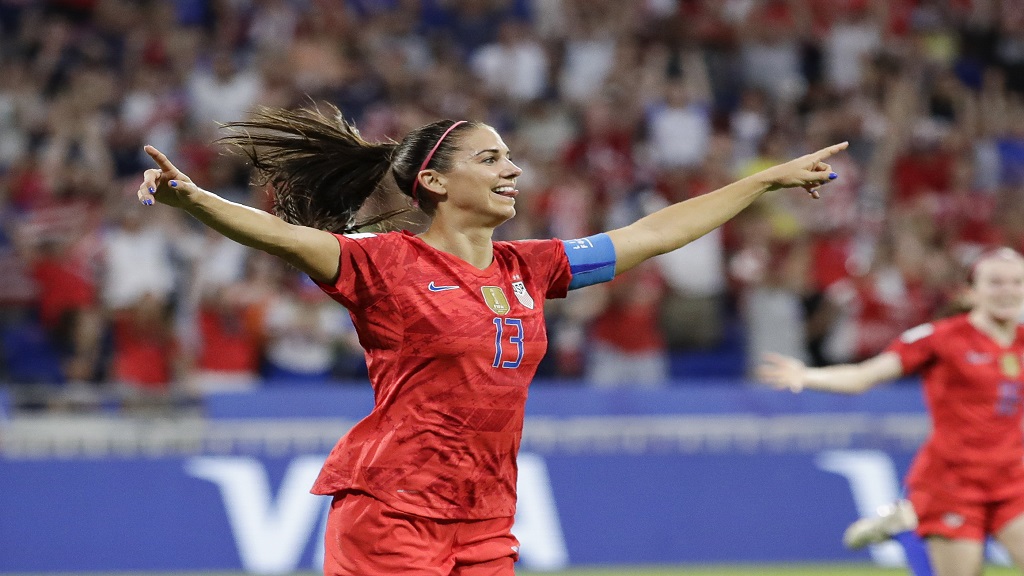 The Lionesses had the opportunity to at least force extra-time with an 84th-minute spot-kick, but Houghton's poor effort was saved and Millie Bright saw red late on as USA held on to ensure their title defence goes to the final stage.

Rapinoe's absence, said to be due to a hamstring issue, provided a pre-match shock, but Christian Press made a swift impact as her replacement when heading in the opener, before Ellen White's equaliser was cancelled out by Morgan nodding in just past the half-hour mark on her birthday.

England produced a good response in the second half and White had a second goal ruled out for straying marginally offside, before Alyssa Naeher easily saved Houghton's penalty and a frustrated Bright earned a second booking, providing a disappointing end for Phil Neville's side.

A breathless start resulted in USA opening the scoring early, with Press meeting Kelley O'Hara's deep cross with a fine header into the top-left corner.

Morgan ensured USA went into the break ahead, however, racing on to Lindsey Horan's lofted pass and glancing a header beyond Carly Telford, before appearing to mock England in her celebration, as she pretended to sip from a cup of tea.

The Lionesses improved after the break and thought they had the equaliser 23 minutes from time as White converted after Jill Scott's gorgeous flicked pass, but a VAR review deemed the striker to have been just offside.

Another VAR referral nine minutes from time gave England a penalty after Becky Sauerbrunn was deemed to have fouled White with the goal at her mercy, but Houghton's feeble effort, taken a full three minutes later, was easily saved.

Bright then showed her annoyance with a strong tackle on Morgan that earned her a second yellow card, and USA subsequently finished the job.