US Soccer lifts ban on kneeling for anthem 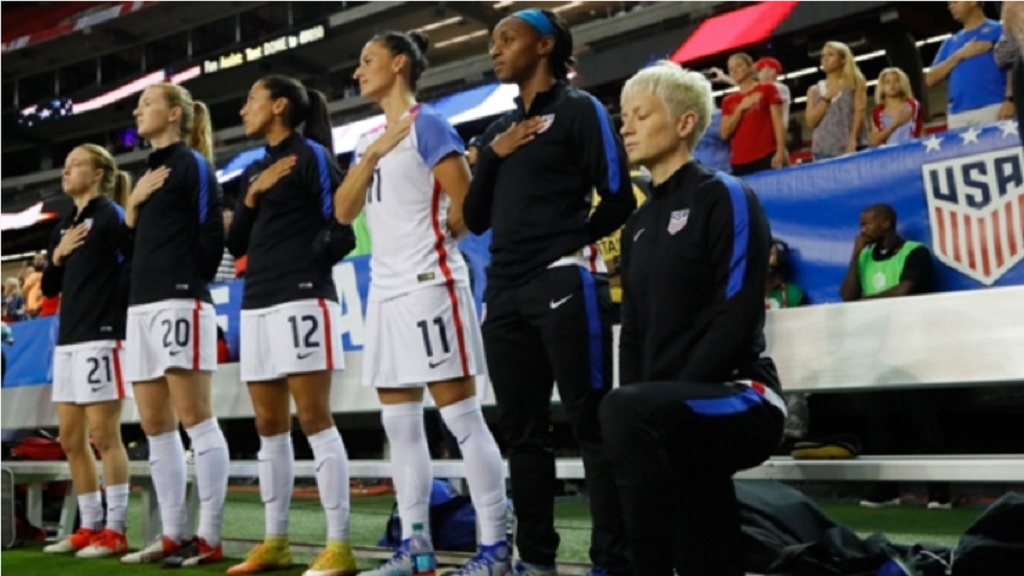 Megan Rapinoe (right) kneels during the anthem in 2016.

United States Soccer has lifted its ban on kneeling during the national anthem having admitted it was wrong to prevent Megan Rapinoe from doing so.

Four years ago, Rapinoe took a knee prior to the women's team's game against Thailand, following the lead of NFL quarterback Colin Kaepernick, who did so to protest police brutality and racial injustice.

Kaepernick was heavily criticised by President Donald Trump for kneeling and US Soccer's board of directors passed a law in 2017 which made it mandatory for its players to stand for The Star-Spangled Banner prior to games.

However, given there has been a renewed focus on the issues Kaepernick was protesting following the death of George Floyd in police custody last month, USA's women's team had called for the ban to be removed.

US Soccer has now revised its law and apologised to its players for passing the rule in the first place.

"US Soccer affirms Black Lives Matter, and we support the fight against racial injustices," the federation said in a statement.

"The US Soccer Board of Directors voted yesterday afternoon to repeat Policy 604-1, which required our players to stand during the national anthem.

"The policy was put in place after Megan Rapinoe kneeled in solidarity with the peaceful protest inspired by Colin Kaepernick, who was protesting police brutality and the systematic oppression of black people and people of colour in America.

"It has become clear that this policy was wrong and detracted from the important message of Black Lives Matter.

"We have not done enough to listen - especially to our players - to understand and acknowledge the very real and meaningful experiences of black and other minority communities in our country.

"We apologise to our players - especially our black players - staff, fans, and all who support eradicating racism.

"Sports are a powerful platform for good, and we have not used our platform as effectively as we should have. We can do more on these specific issues and we will."

US Soccer's decision comes after NFL commissioner Roger Goodell admitted that league was also wrong to not listen to its players when they peacefully protested.