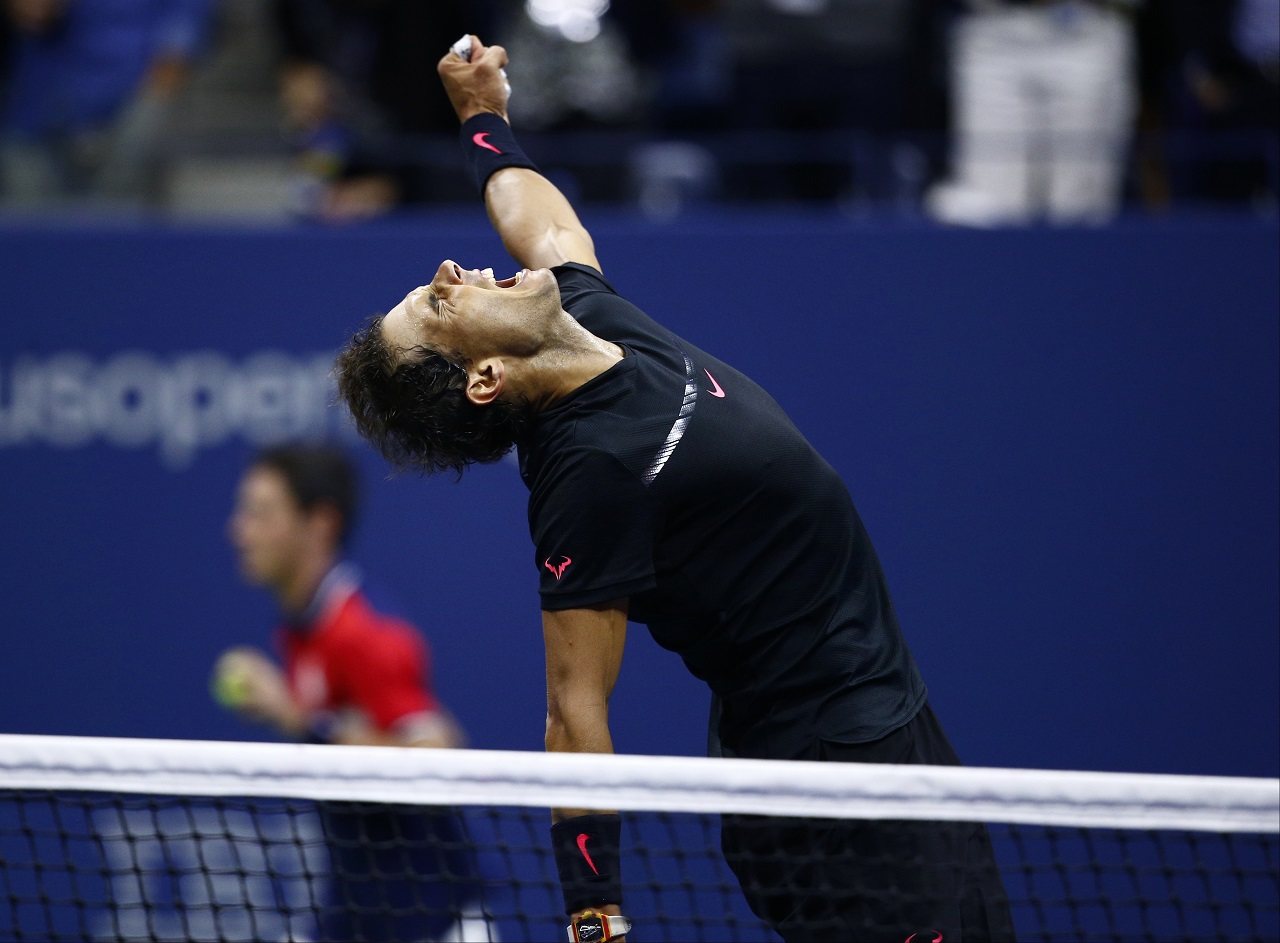 Once Rafael Nadal went from passive to aggressive and got his uppercut of a forehand going, it didn't take long for him to power into the U.S. Open final.

Closing in on a third title at Flushing Meadows and 16th Grand Slam championship overall, Nadal overcame a so-so start with an overwhelming performance the rest of the way Friday night, taking nine games in a row during one stretch to beat 2009 champion Juan Martin del Potro 4-6, 6-0, 6-3, 6-2 in the semifinals.

"He played so smart from the second set until the end of the match," del Potro said. "He was dominant."

No. 1 Nadal will be a significant favorite Sunday against No. 32 Kevin Anderson of South Africa, who beat Pablo Carreno Busta 4-6, 7-5, 6-3, 6-4 to become the lowest-ranked U.S. Open finalist since the ATP's computer rankings began in 1973. The 6-foot-8 (2.03-meter) Anderson, who won an NCAA doubles title at the University of Illinois, is equipped with a big serve, certainly, but he only once had even been a quarterfinalist at a major until this week. He's also lost all four previous matches against Nadal.

Plus there's this: Nadal looked as good as ever over the last three setsagainst del Potro, further confirmation of his return to the height of his powers. Nadal is again healthy and capable of excellence, after wrist and knee injuries dulled his effectiveness in 2015 and 2016 — the first seasons since 2004 in which he not only failed to win a Grand Slam trophy but didn't even make a final.

"It's been an amazing season, of course, after a couple of years with some troubles, injuries, tough moments," Nadal said. "So this year, since the beginning, has been a very emotional year."

He reached the Australian Open final in January, losing to Roger Federer, then claimed his record 10th French Open championship in June.

When Nadal's uncle and coach, Toni, was asked to describe his nephew's year, this was the reply: "It's easy to describe it. He has played really good."

Eventually, Del Potro's flat, fearsome forehand became less dangerous, as if he suddenly remembered just how weary he was, and his backhand — a two-handed shot he has had to rebuild after three operations on his left wrist — was effective early, then stopped hurting Nadal.

"He was playing all the time to my backhand, and when you don't have that confidence to play three, four hours with a good backhand against Rafa, it's just a matter of time," del Potro said.

Dealing with the flu and a fever, del Potro came back from a two-set deficit to win his fourth-rounder in five sets, then got past 19-time major champion Federer in the quarterfinals in four. Maybe it was all too much for del Potro, whose one Grand Slam title came via wins over Nadal in the semifinals and Federer in the final in New York eight years ago.

That was the last time Nadal lost in a major semifinal ; he's now won 15 in a row. This time, the 24th-seeded del Potro actually edged ahead with the match's first break, going up 3-2 in the first set when a backhand return caught the net tape and took a fortuitous roll over to Nadal's side for a winner.

That moment was greeted with a chorus of "Ole, ole, ole, ole! Del-po! Del-po!" for the popular Argentine, who would serve out that set, punctuating it with a forehand .

Maybe that woke up Nadal, who wouldn't again relinquish a game until he owned the second set and a 3-0 lead in the third. The next time del Potro served, Nadal finally earned his first break point with some fantastic defense, throwing himself to his left to somehow get back one massive forehand from del Potro, who — perhaps stunned that ball came back — sent his next forehand long.

By now, Nadal was pulling his own intimidating, topspin-lathered forehand up the line and pressing the matter whenever del Potro left a ball short.

As Uncle Toni put it, Nadal "began to attack, with very good decisions."

It was quickly clear that the only doubt remaining was what the final score would be.

"Just the fight to be in the final, and have a chance to fight for another title here, is so important for me," Nadal said.

Hours earlier, Anderson was so excited that he celebrated his semifinal victory as if it made him the champion, stepping on a chair and then a flower box to help him climb into his guest box in the stands.

"I don't know if it's appropriate," Anderson said. "It certainly felt the right thing to do."

He is appearing in his 34th major tournament and took advantage of a draw depleted by withdrawals of several top players, including past champions Novak Djokovic, Andy Murray and Stan Wawrinka.

"It's nice," Anderson said, "that some of them gave us a bit of a shot to make a run in this tournament."