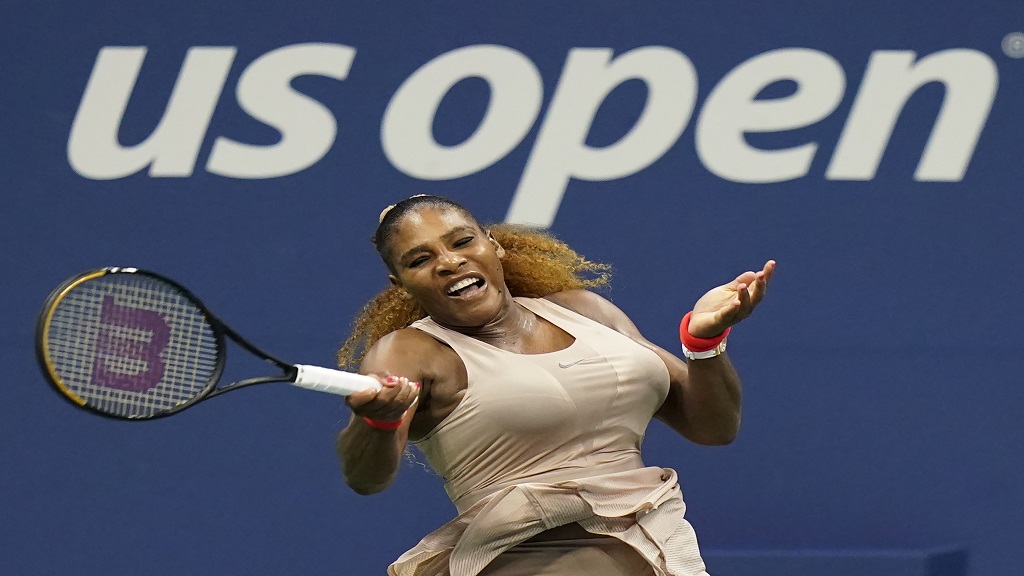 Serena Williams, of the United States, returns a shot to Margarita Gasparyan, of Russia, during the third round of the US Open tennis championships, Thursday, Sept. 3, 2020, in New York. (AP Photo/Frank Franklin II).

Former world number one and third seed Williams prevailed in a tricky test against Margarita Gasparyan in straight sets in New York on Thursday.

It was not good news for 10th seed Muguruza, who was sent packing by unranked Bulgarian Tsvetana Pironkova.

Williams continued her quest for a record-equalling 24th grand slam after defeating Russian Gasparyan 6-2 6-4 to set up a showdown with 2017 US Open winner Sloane Stephens.

The 38-year-old Williams hit 27 winners and just 16 unforced errors, an improvement on her numbers in the opening round, under the Arthur Ashe Stadium lights.

Williams, who has not won a slam since the 2017 Australian Open, will next meet Stephens after the American 26th seed eased past Olga Govortsova 6-2 6-2.

Kenin advanced to the third round of her home slam for the fourth year in a row thanks to a 6-4 6-3 victory over Fernandez.

World number four Kenin did not face a break point in a contest lasting one hour, 21 minutes.

Muguruza's US Open campaign came to an end in the second round, sensationally upstaged 7-5 6-3 by Pironkova, who is playing her first tournament since Wimbledon in 2017.

Australian Open runner-up and two-time slam champion Muguruza was serving for the first set when the Spaniard started to unravel.

Pironkova, who gave birth to a son during her time away from the WTA Tour, took control at the end of a tight first set and never looked back.

"I'm not going to hide, I didn't expect my first tournament to be so good and to play so well. It's welcome! That's why I came back, for these matches and these stages," Pironkova said after winning 93 per cent of her first serves.

A US Open finalist in 2012 and 2013, Azarenka is in fine form after winning the Western & Southern Open last week.

And Azarenka is now just one victory away from her first second-week appearance at Flushing Meadows in five years.

US OPEN 2020: Murray beaten in NY as Medvedev, Thiem cruise

US OPEN 2020: Zverev, Tsitsipas join Djokovic in third round

US OPEN 2020: Pliskova crashes out as Osaka, Kvitova advance