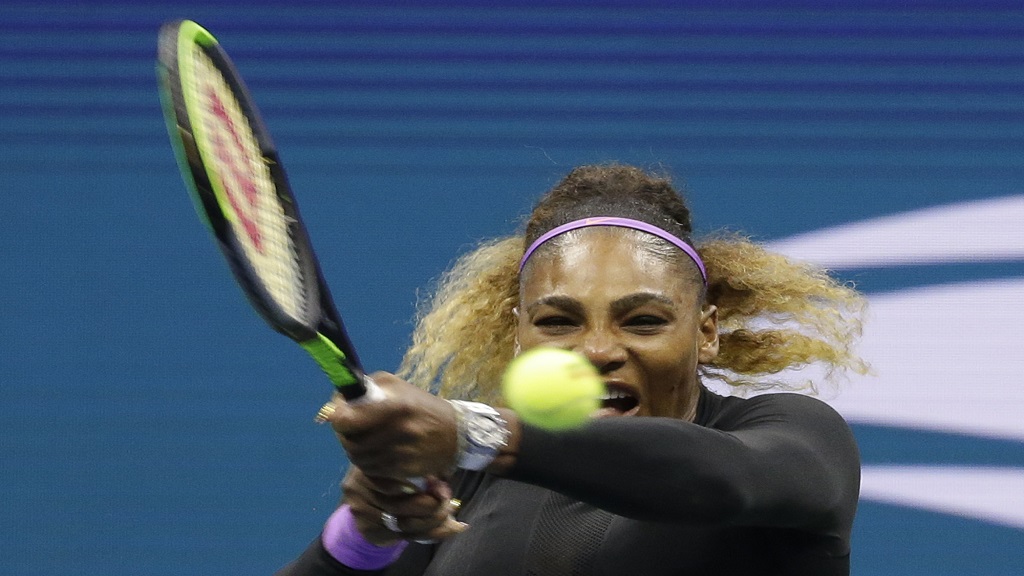 Serena Williams, of the United States, returns a shot to Qiang Wang, of China, during the quarterfinals of the U.S. Open tennis tournament, Tuesday, Sept. 3, 2019, in New York.

Serena Williams powered into the last four of the US Open with a crushing straight-sets quarter-final win over Wang Qiang that marked her 100th at Flushing Meadows.

Wang produced one of the shocks of the tournament in the fourth round as she stunned second seed Ashleigh Barty to reach her first grand slam quarter-final.

However, the Chinese's dream run to the last eight ended in nightmare fashion as Williams allayed any concerns over an ankle she rolled in her victory over Petra Martic with a devastating performance.

Her 6-1 6-0 success was wrapped up in only 44 minutes and underlined her status as tournament favourite in the wake of the exit of defending champion Naomi Osaka, as well as those of Barty and third seed Karolina Pliskova.

Williams will next face Elina Svitolina in the semi-finals, and on this evidence the Ukrainian will need to produce the performance of her life to deny the American a place in her 33rd grand slam singles final.

Any possibility of Wang claiming the biggest win of her career was brutally extinguished by Williams as she started the first set by winning three games in just eight minutes.

She ripped a cross-court forehand at the net to get the opening break and Williams continued to illustrate the sizeable gap in quality in a set that saw Wang win only seven points on her own serve.

Wang was able to get on the board but Williams wrapped up the first with a thunderous ace, and kept her foot firmly on the gas in a second that somehow managed to be even more one-sided.

As Williams motored towards a bagel, Wang cut an increasingly disconsolate figure and the match was brought to a merciful end inside three quarters of an hour when the 37-year-old crunched home her 24th winner.

"It's really unbelievable, literally, from when I first started here I never thought I would get to 100," Williams told ESPN of her achievement. "It didn't even cross my mind that I would still be out here."

US Open 2019: Federer loses US Open QF to Dimitrov

US Open 2019: Nadal cruises past Chung to end comfortable week

US Open 2019: Federer sweeps aside Evans and into fourth round