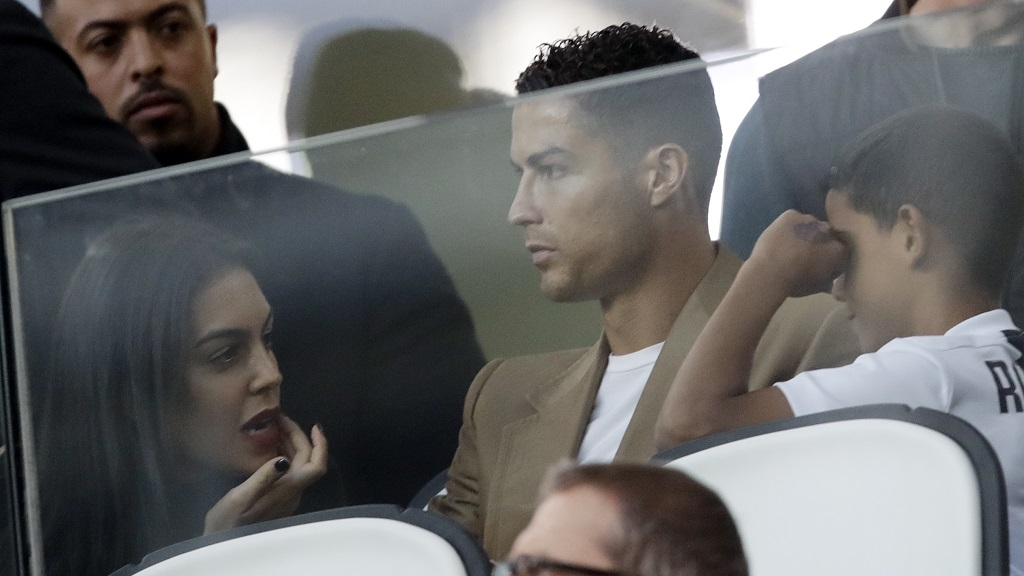 In this Oct. 2, 2018 file photo, Juventus forward Cristiano Ronaldo, centre, is flanked by his girlfriend Georgina, left, and his son Cristiano Jr, as he sits in the stands during a Champions League, group H football match against Young Boys, at the Allianz stadium in Turin, Italy. (AP Photo/Luca Bruno, File).

Cristiano Ronaldo’s legal fight with a woman who accuses the international football star of raping her in his suite at a Las Vegas resort more than 10 years ago is heading toward a trial before a federal judge in Nevada.

No date was immediately set, but US District Judge Jennifer Dorsey said she will hear arguments and decide herself whether Kathryn Mayorga was mentally fit to enter a 2010 hush-money agreement with Ronaldo’s representatives that paid Mayorga $375,000.

Mayorga’s lawyers, led by Leslie Mark Stovall, did not immediately respond to email and telephone messages about the judge’s ruling, issued September 30.

Dorsey wrote that a court should decide whether Mayorga “lacked the mental capacity" to sign a confidentiality arrangement with Ronaldo’s representatives and “whether any agreement ... was ever formed between the parties.”

It was not immediately clear whether Ronaldo or Mayorga will have to be in court in person when a trial is held.

The Associated Press generally doesn’t name people who say they are victims of sexual assault. But after filing her lawsuit against Ronaldo in October 2018, Mayorga gave consent through her attorneys to be identified.

Dorsey gave both sides until the end of November to agree upon a plan for a bench trial.

Christiansen could appeal Dorsey’s order to the 9th US Circuit Court of Appeals. He declined to say if he will do so.

The ruling represents a setback for Ronaldo’s legal representatives, who have so far kept details of the 2010 settlement sealed. It moves back to a public court questions that US Magistrate Judge Daniel Albregts said in February belonged behind closed doors.

Ronaldo, 35, lives in Portugal and is one of the richest athletes in the world. He plays in Italy for the Turin-based football club Juventus and captains his home country’s national team.

Mayorga, 37, is a former teacher and model who lives in the Las Vegas area. She claims in her lawsuit that Ronaldo or his associates violated the confidentiality agreement by allowing reports about it to appear in European publications in 2017. She seeks to collect at least $200,000 more from Ronaldo.

Ronaldo’s lawyers maintain that media reports were based on electronic data illegally hacked, stolen and sold by cyber criminals. They say they believe documents have been altered and complain that Mayorga’s lawsuit damages Ronaldo’s reputation.

Mayorga says she met Ronaldo at a nightclub in 2009 and went with him and other people to his hotel suite where her lawsuit alleges he assaulted her in a bedroom. She was 25 at the time. He was 24.

Ronaldo, through his lawyers, maintains the sex was consensual.

Stovall says Mayorga had learning disabilities as a child, was pressured by Ronaldo's representatives and lacked the legal capacity to sign a non-disclosure agreement.

The judge declined, at least for now, to name Mayorga's brother as her guardian for the case. Dorsey also said some disputes could be resolved out of court.

“The court must decide whether Mayorga lacked the mental capacity to assent to the settlement agreement,” Dorsey wrote.

If Mayorga was fit to enter the agreement, the judge said, it binds her to confidentiality and an arbitrator's decision behind closed doors about whether the contract was legal and valid.