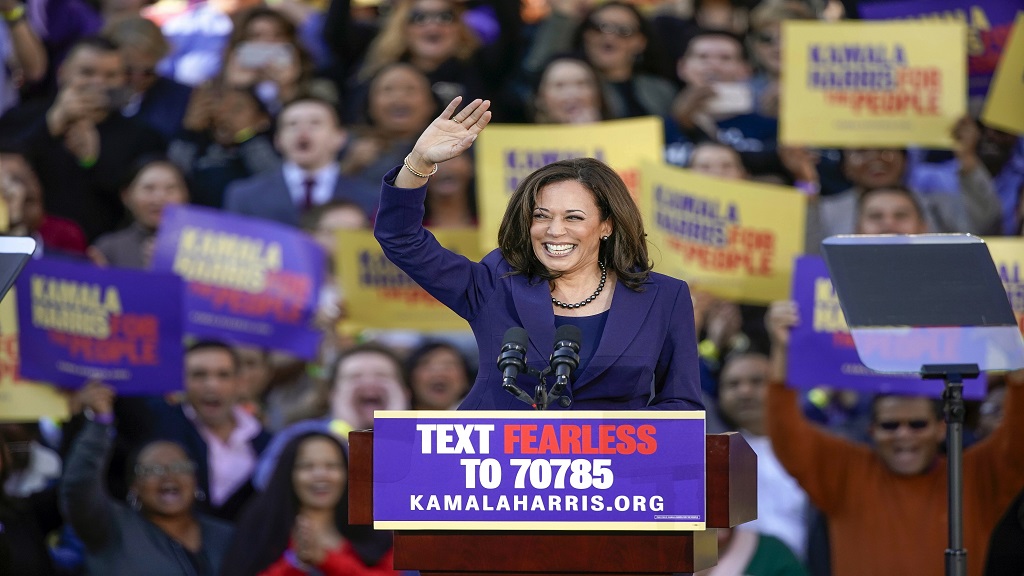 In this January 27, 2019, file photo, Democratic Senator Kamala Harris, of California, waves to the crowd as she formally launches her presidential campaign at a rally in her hometown of Oakland, California. (Photo: AP)

Jamaicans are now over the moon at the fact that a woman with Jamaican ancestry will become vice-president of the United States.

Kamala Harris, 56, who created history when she and Joe Biden were on Saturday declared the presumptive winners (subject to final counts) of the November 3 presidential election, will be the first woman vice president and the first person of colour to hold that office. The vice president is first in line to the presidency and this has taken on added significance as Biden, at 77, will be the oldest man to be inaugurated as United States president.

Vice President-elect Harris’ father, Donald J. Harris, professor emeritus at Stanford University is a Jamaican, while her late mother, Shyamala Gopalan was a biologist from India whose work on the progesterone receptor gene stimulated work in breast cancer research. Her ancestry makes Harris a Jamaican-Indian-American.

The junior senator from California was still into her first six-year term in the United States Senate when Biden chose her to be his running mate. She quickly grabbed national headlines for her sharp and piercing questioning during confirmation hearings, and especially during outgoing President Donald Trump's impeachment trial. The decision to choose Harris paid big dividends for the Democratic party as the power team relegated the enigmatic and often combative and divisive Trump, the former businessman and reality TV star turned politician to a one-term president, a rarity in US presidential politics.

America will have its first female Vice President in the person of Kamala Harris, and we are proud that she bears Jamaican heritage. pic.twitter.com/1Ovte7F2YP

Harris helped the Biden ticket drive black women in particular and people of colour generally, to the polls in key battleground states. With thousands of votes still being counted, and despite a once in a century pandemic (COVID-19) this is the highest voter turnout in the United states in one hundred years. The Caribbean-American community, in particular Jamaicans in many US states reportedly cast their ballots for Biden and Harris just because she was on the ticket. The large Indian community, in places like California, Harris’ home state also reportedly turned out in droves to vote because of her.

Back in India, worshippers poured milk over a Hindu idol and prayed for Harris near her ancestral home in the nation’s southern Tamil Nadu region.

Meanwhile, Jamaicans took their exhilaration to social media after Harris was declared US vice president-elect.

"Her ascension to this role is a monumental accomplishment for women all over the world and I salute her. We look forward to working with the new administration," Holness said.

"No matter your #politics, history has been made. The 1st #woman vice-president of color has been elected. The best part, she #Jamaican on her daddy side. The whole of #JamDown is celebrating," tweeted Stephanie, an author.

One user joked that Harris would channel her Jamaican roots to get Donald Trump, who has refused to concede defeat, out of the White House.

Don’t worry... @KamalaHarris #jamaican side knows how to get rid of the #Duppy spirit roaming in the #WhiteHouse... all I’m saying is... she has Blue, salt, and Wray and Nephew White Rum pic.twitter.com/yDY2mkTHEl

Harris was born on October 20, 1964, in Oakland, California, her parents having met in the early 1960s. Her mother arrived in the United States from India in 1958 and her father from Jamaica three years later in 1961. Along with her younger sister, Maya, Harris lived in Berkeley, California. While she appeared on a bi-racial ticket in a deeply divided country, Harris herself experienced racism as a child. In kindergarten, she was bused as part of Berkeley’s comprehensive desegregation programme to Thousand Oaks Elementary School, a public school in a more prosperous neighborhood in northern Berkeley

As children, she and her sister visited their mother's family in Madras (now Chennai) several times. She has said that she has been strongly influenced by her maternal grandfather P.V. Gopalan, a retired Indian civil servant whose progressive views on democracy and women's rights impressed her. Harris has remained in touch with her Indian aunts and uncles throughout her adult life and has also visited her father's family in Jamaica.

Harris is highly qualified. After high school, she attended the prestigious Howard University, graduating in 1986 with a degree in political science and economics. She then returned to California to attend law school at the University of California, graduating in 1989 and being admitted to the bar a year later in 1990. That same year she was hired as deputy district attorney in Alameda County, California.

Below is a summary of her impressive resume:

Harris’ ascendency to the vice president’s position is creating another type of history. What to call her husband, Douglas Emhoff.

Will Harris’ husband Emhoff be referred to as ‘Second Gentleman’. Only time will tell.