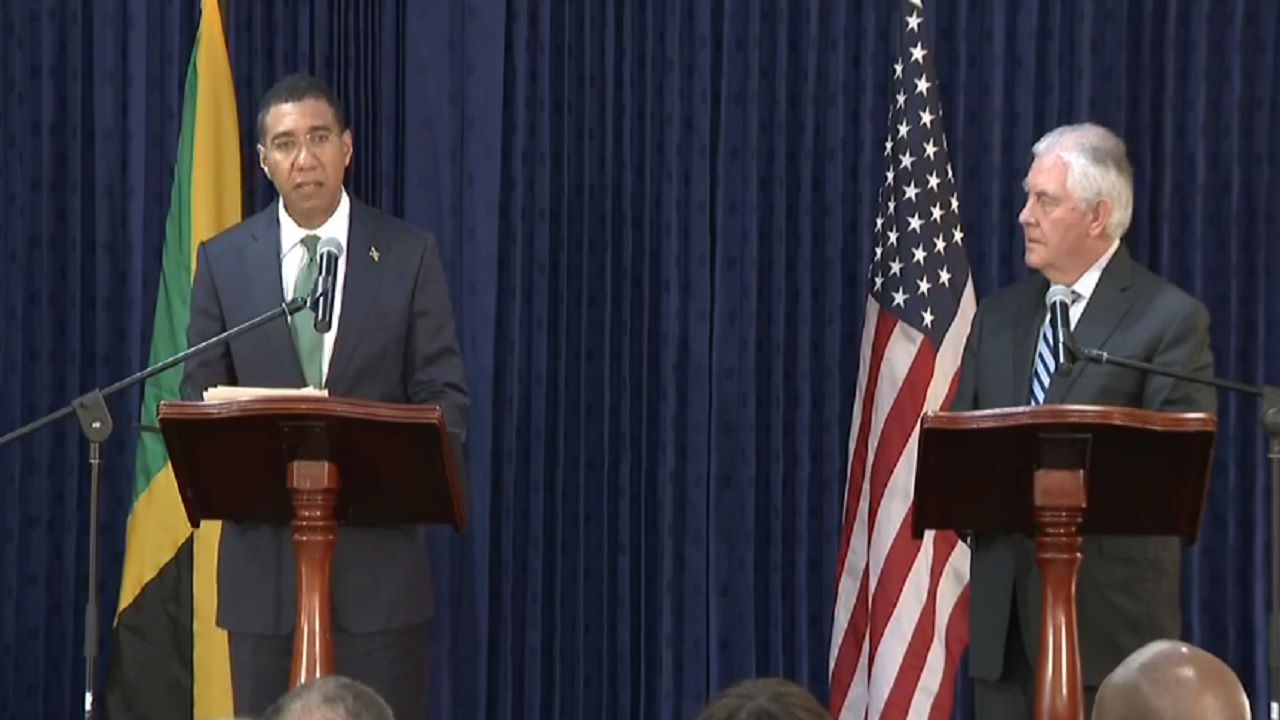 United States Secretary of State, Rex Tillerson has sought to assure Jamaica and its Caricom partners that any move to impose sanctions on the Venezuelan government will take into account the dependence of the region on the oil member states receive on concessionary terms, from the Nicolas Maduro regime.

“As to any future steps that the US might take regarding sanctioning oil or products to put more pressure on the Maduro regime, we are going to take into full consideration the impact on regional countries as well,” Tillerson reasoned.

He was speaking Wednesday during a media briefing at Jamaica House following bi-lateral talks with Prime Minister Andrew Holness.

The top US diplomat said he had “a good exchange” with Holness regarding that issue when both men spoke prior to jointly hosting the media briefing.

He was responding to a question from a journalist attached to the CBS network about whether the United States would be willing to provide oil at concessionary rates to Jamaica and the wider Caricom, on terms similar to the PetroCaribe agreement.

Responding, Tillerson said “we will be looking to see what actions the US might take to mitigate the negative impacts of that.”

He refused to get into specifics because “we are going to undertake a very quick study to see whether there are some things the US could easily do with our rich energy environment and with the infrastructure that we already have available; what could we do to perhaps soften the impact of that.”

Tillerson argued that regardless of the nature of the action that may be taken on Venezuela, there was “great unanimity in the region and certainly in the hemisphere that we all want to see some progress on this situation in Venezuela that only gets worse day by day.”

For his part, Holness said Jamaica does not currently import oil from Venezuela, which is in turmoil with the government facing serious opposition and with questions now raised about human rights abuse in the once prosperous country.

“With the new dynamics in global trade in energy and with the United States becoming a net exporter of energy resources, Jamaica can, in this new paradigm, benefit from that,” he added.

Noting the “strong democratic values” that bind Jamaica closely with the United States, Tillerson said it’s heartbreaking to see what’s happening in Venezuela with a once thriving democracy being “dismantled before our very eyes.”

Tillerson arrived in Jamaica Wednesday afternoon for a brief visit on the last leg of his five-country whirlwind trip to Central and South America and the Caribbean.

He previously made stops in Argentina, Colombia, Mexico and Peru.

US Secretary of State Rex Tillerson to visit Jamaica in February