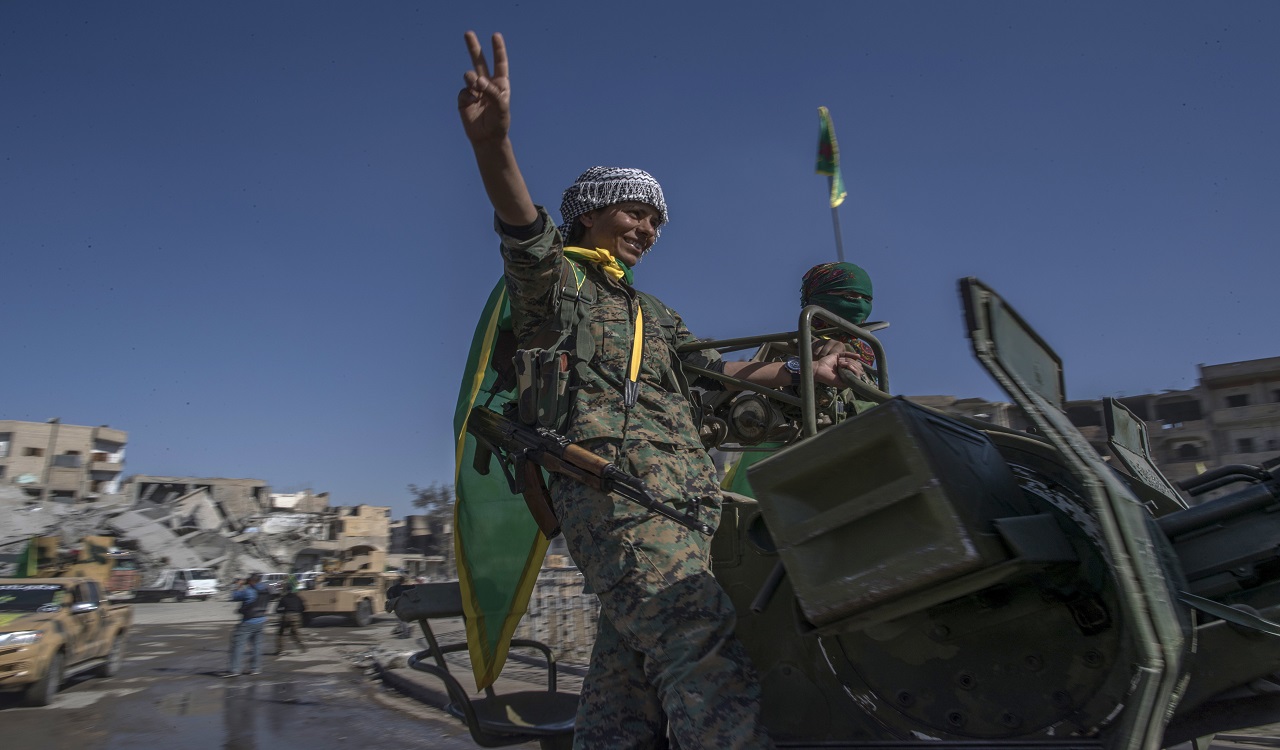 In this Thursday, Oct. 19, 2017 photo, fighters from the Women's Protection Units, or YPJ, hold a celebration in Paradise Square in Raqqa, Syria. The Kurdish female militia that took part in freeing the northern Syrian city of Raqqa from the Islamic State group said on Thursday it will continue the fight to liberate women from the extremists' brutal rule.

Syrian Kurdish-led forces backed by the United States declared victory over the Islamic State group in its former "capital" of Raqqa on Friday, declaring the northern Syrian city free of any extremist presence after a four-month battle that left it in ruins.

At a press conference held inside the city, the Syrian Democratic Forces as they are known formally handed over administration of the devastated northern city to a council made up of local officials and tribal leaders and a 3,000-strong U.S.-trained police force tasked with governance and security.

In a highly symbolic move, the press conference was held inside the city's sports stadium which Islamic State militants had turned into an arms depot and a huge prison where they incarcerated and tortured their opponents.

"Our victory is one against terrorism, and the liberation of Raqqa marks the latest chapter in the fight against terrorists in Syria," said Talal Sillo, a spokesman and senior SDF commander.

Associated Press drone footage from Raqqa showed the extent of devastation caused by weeks of fighting between Kurdish-led forces and the Islamic State group and thousands of bombs dropped by the U.S.-led coalition.

Footage from Thursday shows the bombed-out shells of buildings and heaps of concrete slabs lay piled on streets littered with destroyed cars. Entire neighborhoods are seen turned to rubble, with little sign of civilian life.

The video showed entire blocks in the city as uninhabitable with knocked-out walls and blown-out windows and doors, while some buildings had several stories turned to piles of debris. The stadium that was used as an arms depot and prison by the extremists appears to have suffered less damage compared with surrounding buildings.

"We call upon all countries and peace-loving forces and all humanitarian organizations to participate in rebuilding the city and villages around it and help in removing the scars of war that were inflicted by the (IS) group," Sillo said.

Sillo said 655 local and international fighters lost their lives fighting IS during the four-month battle for Raqqa.

He added that residents will be allowed to return to the city once the mines and explosives are removed. In other cities that the extremists lost earlier, experts worked for weeks to remove booby traps and explosives that kept maiming and killing people long after IS left.

Long before the ground offensive by the Syrian Democratic Forces began in Raqqa in early June, warplanes pounded the city for months.

The U.S.-backed Kurdish-led SDF announced Tuesday they have driven IS militants out of the city after weeks of fighting.

The fall of Raqqa marks a major defeat for IS, which has seen its territories steadily shrink since last year. IS took over Raqqa, located on the Euphrates River, in January 2014, and transformed it into the epicenter of its brutal rule.