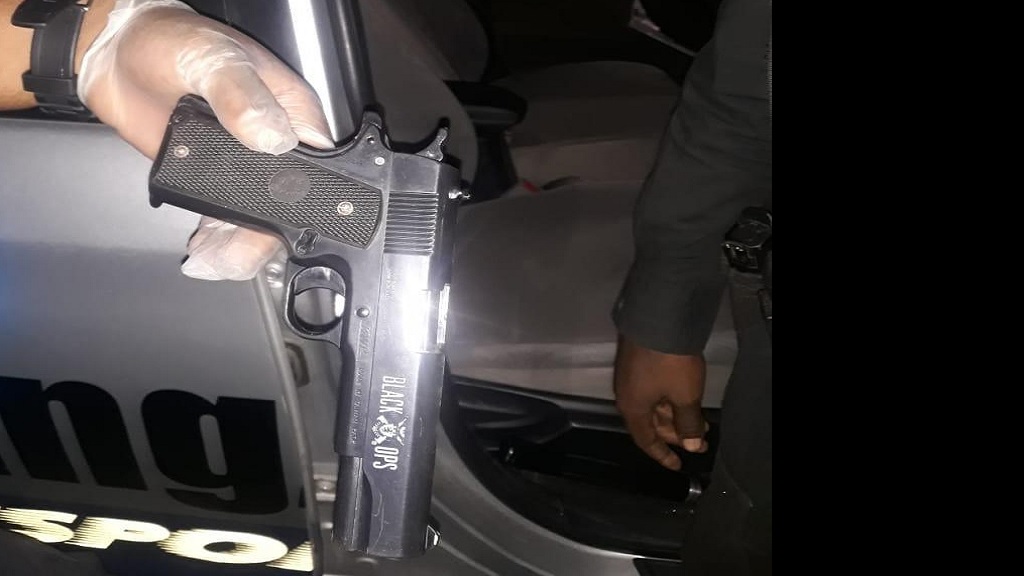 The imitation gun that was seized by security guards after a fatal confrontation with three men on Studio One Boulevard in Cross Roads, St Andrew early on Thursday morning.

A teenage boy is now in custody following an incident in which a man was shot dead and an imitation firearm seized during a confrontation between a group of alleged criminals and a team of armed security guards.

The incident unfolded on Thursday in the Studio One Boulevard area of Cross Roads, St Andrew.

The police said the man who was killed remains unidentified.

Cops also said they have intensified their search for a third man who escaped from the scene.

Reports are that at about 1am, a group of guards from King Alarm received a call about a break-in at a property on Studio One Boulevard and responded.

Information reaching Loop News is that the guards, upon arrival at the location, carried out a search of the property and found no one.

Reports are that as the guards were about to leave the location, they were confronted by three men.

One of the men reportedly pulled a firearm and was approaching the vehicle that the guards were traveling in.

One of the guards pulled his gun and opened fire at the assailant.

The armed thug was hit and later taken to hospital, where he was pronounced dead.

The guards managed to apprehend another member of the group, who turned out to be a teenage boy.

The Cross Roads police are carrying out a search for the third suspect, who remains at large.

One man shot dead, another held by armed guards

Opposition heading to court over classification of security guards