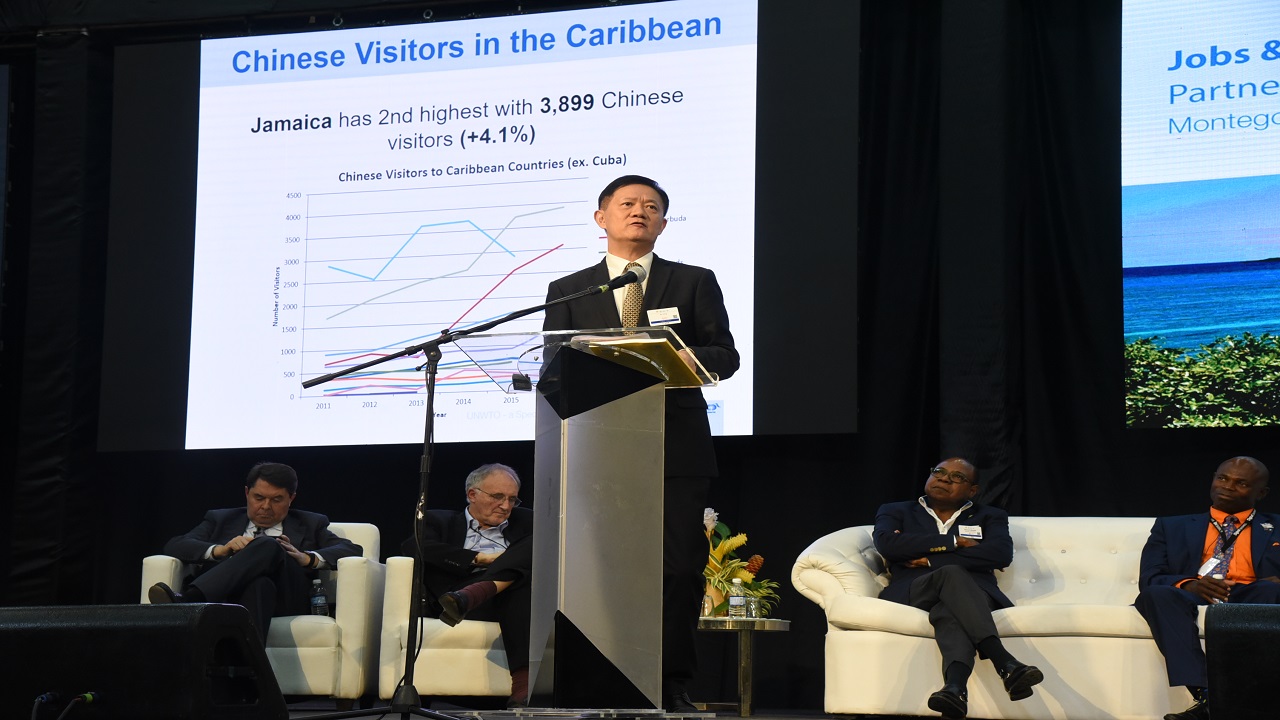 Xu Jing, Regional Director for Asia and the Pacific at the UNWTO, speaks during the conference on Monday.

Xu Jing, Regional Director for Asia and the Pacific, United Nations World Tourism Organisation (UNWTO), has urged Caribbean nations to tap into the US$261 billion that Chinese travelers spent globally last year by offering "Chinese friendly" services across the region.

“According to my latest figure, last year 2.1 million Chinese visited the United States. From that number, some 300,00 travelers visited Florida. Many Chinese tourists who travel to America can be lured to the Caribbean if you increase travel facilitation. To make an impact, you need to offer more ‘Chinese friendly services,” explained Jing, adding that some 135 million Chinese travelled across the world in 2016.

Jing was the final presenter on the first day of the UNWTO Global Conference on Jobs & Inclusive Growth: Partnerships for Sustainable Tourism, being mounted at the Montego Bay Convention Centre.

The event is hosted by the UNWTO, Government of Jamaica, World Bank Group and the Inter-America Development Bank. Platinum sponsors include Airbnb, Sandals, AM Resorts, Digicel, Chukka Cove and The Jamaica National Group.

“To get the Chinese market,” he added, “it is not about the Tweets or the Trip Advisor. More than anything else, it will be about the Chinese way of viewing the digital platforms such as ‘We Chat’.  In China, We Chat is not only social media, it is our digital wallet for financial transactions when we travel abroad.”

The Regional Director stated that apart from preparing for the ‘tech-savvy’ Chinese market, the Caribbean also had to understand its culture.

“The region also needs amenities such as Chinese language services, free Wi-Fi; integrating elements of Chinese culture and special conveniences, such as slippers, tea kettles, Chinese tea, and, accepting payment services of Chinese companies. These adjustments will make the Chinese feel more welcomed and can increase the demand for more tourists from China in the future,” he emphasized.

He pointed out that apart from these facilities, the region needed to target cruise ship passengers as another area. He added that The Caribbean culture also offered a unique selling point to the Chinese market.

“In the Caribbean, apart from the added value of the beach and the sun, the cruise element will also make the experience different from other destinations. Added to that, if you can put the music, the food, the Blue Mountain Coffee components into the Chinese product, the region should do well,” he continued.

Jing told the delegates that last year, just under 50,000 Chinese visited the Caribbean, with approximately 40,000 going to Cuba, while Jamaica was second with just under 4,000 visitors. He emphasized that Cuba was able to benefit from that number of visitors because Havana had the only airport in the Caribbean that had direct flights from China and had no visa restrictions.

He said “Jamaica also had no visa restrictions, but no one knows that. Therefore, more work is needed when it comes to publicity.”

Jing stated that islands in the Indian Ocean were able to revive their tourist market after the 2004 tsunami and believed this success could be replicated in the region.

“After the tsunami, the island nation of the Maldives started to look at Asia as a destination to attract visitors from other than Europe.  They decided that apart from the tourists from Germany, Italy and Britain, they wanted more persons from other regions. Today, in the Maldives and the Seychelles, they are flooded with the Chinese travelers. If the Maldives was able to do this, why not the Caribbean?” he asked.