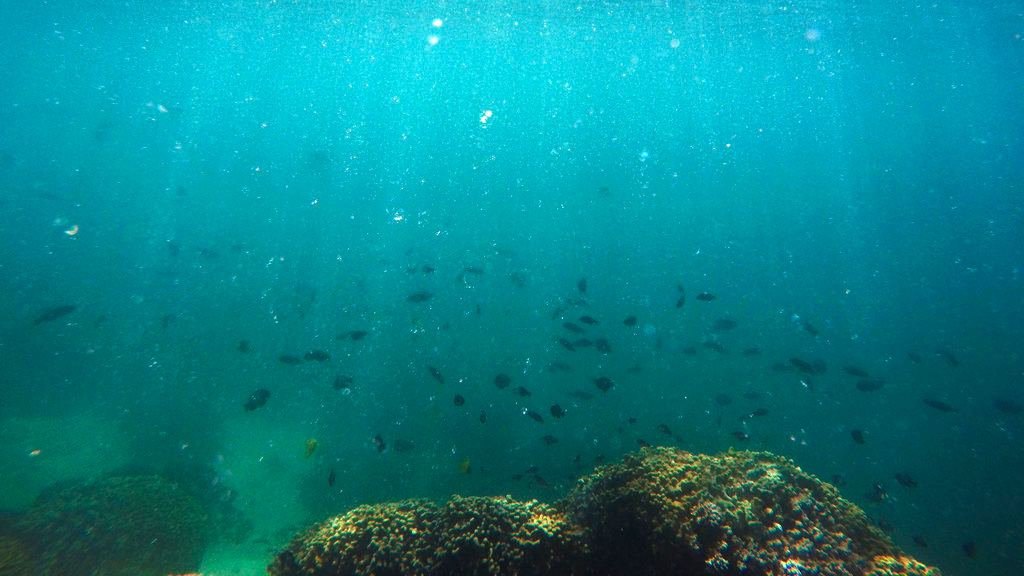 In this Oct. 26, 2015 file photo, fish swim over a patch of bleached coral in Hawaii's Kaneohe Bay off the island of Oahu. Warmer water is repeatedly causing mass global bleaching events to Earth's fragile coral reefs.

Preventing an extra single degree of heat could make a life-or-death difference in the next few decades for multitudes of people and ecosystems on this fast-warming planet, an international panel of scientists reported Sunday. But they provide little hope the world will rise to the challenge.

The Nobel Prize-winning Intergovernmental Panel on Climate Change issued its gloomy report at a meeting in Incheon, South Korea.

In the 728-page document, the U.N. organization detailed how Earth's weather, health, and ecosystems would be in better shape if the world's leaders could somehow limit future human-caused warming to just 0.9 degrees Fahrenheit (a half degree Celsius) from now, instead of the globally agreed-upon goal of 1.8 degrees F (1 degree C). Among other things:

— Half as many people would suffer from lack of water.

— There would be fewer deaths and illnesses from heat, smog and infectious diseases.

— Half as many animals with backbones and plants would lose the majority of their habitats.

— There would be substantially fewer heat waves, downpours, and droughts.

— The West Antarctic ice sheet might not kick into irreversible melting.

— And it just may be enough to save most of the world's coral reefs from dying.

"For some people this is a life-or-death situation without a doubt," said Cornell University climate scientist Natalie Mahowald, a lead author on the report.

Limiting warming to 0.9 degrees from now means the world can keep "a semblance" of the ecosystems we have. Adding another 0.9 degrees on top of that — the looser global goal — essentially means a different and more challenging Earth for people and species, said another of the report's lead authors, Ove Hoegh-Guldberg, director of the Global Change Institute at the University of Queensland, Australia.

But meeting the more ambitious goal of slightly less warming would require immediate, draconian cuts in emissions of heat-trapping gases and dramatic changes in the energy field. While the U.N. panel says technically that's possible, it saw little chance of the needed adjustments happening.

In 2010, international negotiators adopted a goal of limiting warming to 2 degrees C (3.6 degrees F) since pre-industrial times. It's called the 2-degree goal. In 2015, when the nations of the world agreed to the historic Paris climate agreement, they set dual goals: 2 degrees C and a more demanding target of 1.5 degrees C from pre-industrial times. The 1.5 was at the urging of vulnerable countries that called 2 degrees a death sentence.

The world has already warmed 1 degree C since pre-industrial times, so the talk is really about the difference of another half-degree C or 0.9 degrees F from now.

"There is no definitive way to limit global temperature rise to 1.5 above pre-industrial levels," the U.N.-requested report said. More than 90 scientists wrote the report, which is based on more than 6,000 peer reviews.

"Global warming is likely to reach 1.5 degrees C between 2030 and 2052 if it continues to increase at the current rate," the report states.

Deep in the report, scientists say less than 2 percent of 529 of their calculated possible future scenarios kept warming below the 1.5 goal without the temperature going above that and somehow coming back down in the future.

The pledges nations made in the Paris agreement in 2015 are "clearly insufficient to limit warming to 1.5 in any way," one of the study's lead authors, Joerj Roeglj of the Imperial College in London, said.

"I just don't see the possibility of doing the one and a half" and even 2 degrees looks unlikely, said Appalachian State University environmental scientist Gregg Marland, who isn't part of the U.N. panel but has tracked global emissions for decades for the U.S. Energy Department. He likened the report to an academic exercise wondering what would happen if a frog had wings.

Limiting warming to the lower goal is "not impossible but will require unprecedented changes," U.N. panel chief Hoesung Lee said in a news conference in which scientists repeatedly declined to spell out just how feasible that goal is. They said it is up to governments to decide whether those unprecedented changes are acted upon.

"We have a monumental task in front of us, but it is not impossible," Mahowald said earlier. "This is our chance to decide what the world is going to look like."

To limit warming to the lower temperature goal, the world needs "rapid and far-reaching" changes in energy systems, land use, city and industrial design, transportation and building use, the report said. Annual carbon dioxide pollution levels that are still rising now would have to drop by about half by 2030 and then be near zero by 2050. Emissions of other greenhouse gases, such as methane, also will have to drop. Switching away rapidly from fossil fuels like coal, oil and gas to do this could be more expensive than the less ambitious goal, but it would clean the air of other pollutants. And that would have the side benefit of avoiding more than 100 million premature deaths through this century, the report said.

"Climate-related risks to health, livelihoods, food security, water supply, human security and economic growth are projected to increase with global warming" the report said, adding that the world's poor are more likely to get hit hardest.

Coral and other ecosystems are also at risk. The report said warmer water coral reefs "will largely disappear."

The outcome will determine whether "my grandchildren would get to see beautiful coral reefs," Princeton's Oppenheimer said.

For scientists there is a bit of "wishful thinking" that the report will spur governments and people to act quickly and strongly, one of the panel's leaders, German biologist Hans-Otto Portner, said. "If action is not taken it will take the planet into an unprecedented climate future."