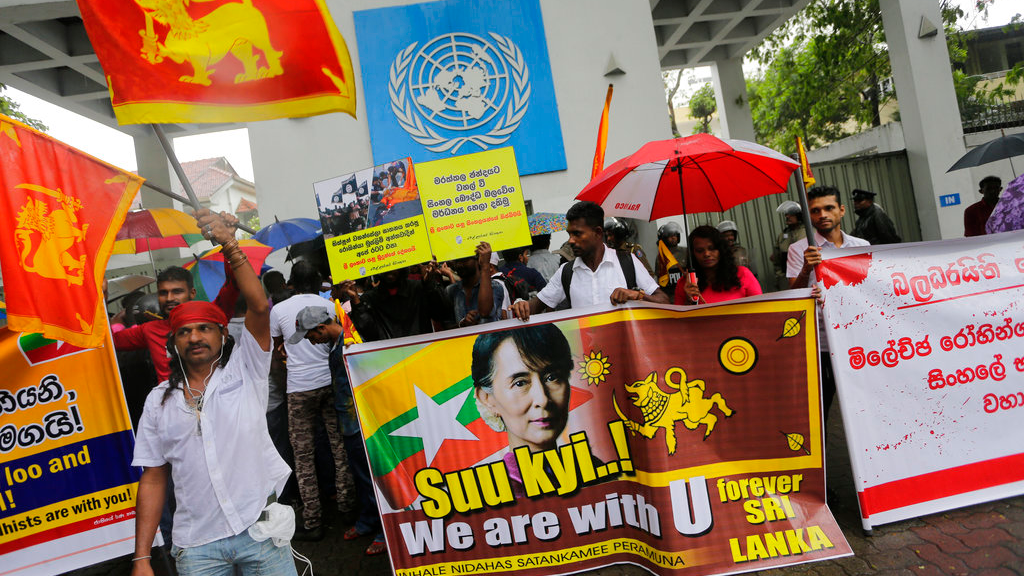 The UN refugee agency said Wednesday that it is alarmed by a mob attack on Rohingya Muslim refugees in Sri Lanka as senior government officials called for stern legal action against the perpetrators that included Buddhist monks.

The reaction of the United Nations High Commissioner for Refugees came a day after a group led by Buddhist monks stormed a United Nations-run safe house for Rohingya Muslims, claiming that they were terrorists and demanding they be sent back to Myanmar, prompting police to relocate them.

Dozens of protesters from Sri Lanka's majority Buddhist community led a mob that entered a multi-storied house at Mount Lavinia on the outskirts of the Sri Lankan capital.

In a statement, the UNHCR said it is "alarmed and concerned" by Tuesday's incident and urged the "public and all those concerned with refugees to continue extending protection and to show empathy for civilians fleeing persecution and violence."

Following the protest, police took 31 Rohingya refugees, including 17 children and 14 adults, into custody Tuesday and moved them to a safe location.

A video clip posted by the nationalist group— Sinhala National Movement — on its Facebook page shows protesters calling Rohingyas "terrorists who killed Buddhists in Myanmar" and saying that they can't live in Sri Lanka.

On Wednesday, finance and media minister Mangala Samaraweera condemned the attack, describing it as a "shameful act," and called for strong action against the perpetrators.

Health minister Rajitha Seneratne said he was depressed by the attack and urged law enforcement authorities to arrest the attackers.

Sri Lanka Buddhists make up 70 percent of the island's 20 million people, while Muslims account for 10 percent.

More than 420,000 Rohingya Muslims have fled from Myanmar to Bangladesh since August 25, when Rohingya insurgent attacks on security forces prompted a military crackdown and reprisals by majority Buddhists.

The Rohingya Muslims have faced persecution and discrimination in Buddhist-majority Myanmar for decades and are denied citizenship, even though they have lived there for generations. The government says there is no such ethnicity as Rohingya and argues that they are Bengalis who illegally migrated to Myanmar from Bangladesh.

The extremist Buddhist monks in Sri Lanka have ties with their counterparts in Mynamar. Both these groups have been accused of leading attacks on minority Muslims in their respective countries.

'Nothing, nothing.' Aid lags in hurricane-torn Puerto Rico

Saudi Arabia to allow women to drive for the first time