UK disarray: May to face no-confidence vote from her party 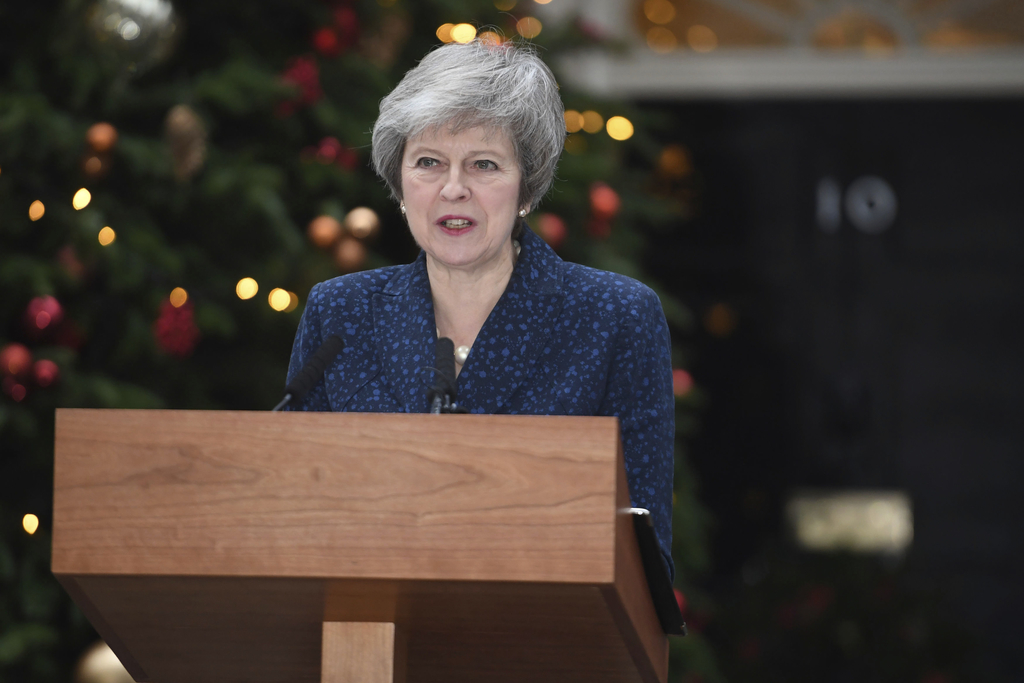 A no-confidence vote on British Prime Minister Theresa May, scheduled for Wednesday evening, has thrown UK politics deeper into crisis and Brexit further into doubt.

May vowed to fight for the leadership of her party and the country "with everything I've got" after opponents who have been circling for weeks finally got the numbers they needed to spark a vote among Conservative Party lawmakers.

The threat to May has been building as pro-Brexit lawmakers within the Conservative Party grew increasingly frustrated with May's conduct of Brexit and the divorce deal she has agreed with the European Union.

The challenge throws Britain's already rocky path out of the EU, which it is due to leave in March, into further chaos and comes days after May postponed a vote to approve the divorce deal to avoid all-but-certain defeat.

Many supporters of Brexit say May's deal, a compromise that retains close economic ties with the EU, fails to deliver on the clean break with the bloc that they want.

Former Environment Secretary Owen Paterson accused May of acting like a "supplicant" in dealings with the EU.

"She's not the person to see Brexit through," he said.

Leading pro-Brexit legislators Jacob Rees-Mogg and Steve Baker said in a joint statement that "in the national interest, she must go."

But in a defiant statement outside 10 Downing St., May said "a change of leadership in the Conservative Party now will put our country's future at risk."

She said ousting her and holding a leadership vote — a process that could take weeks — could result in Brexit being delayed or even stopped.

May, who spent Tuesday touring EU capitals to appeal for changes to sweeten the divorce deal for reluctant U.K. lawmakers, has until Jan. 21 to hold a vote on her deal in Parliament, a timetable that could be scuttled if she is ousted.

On Wednesday morning Graham Brady, who heads a committee overseeing Conservative leadership contests, said he had received letters from at least 48 lawmakers asking for a vote. That's the 15 percent of Conservative legislators needed to spark a vote under party rules.

Brady said the vote would be held in Parliament between 6 p.m. and 8 p.m. (1800GMT and 2000GMT) on Wednesday evening, with the results announced soon after.

If she loses the confidence vote, May must step down and there will be a contest to choose a new Conservative leader. She will remain leader, and prime minister, until the successor is picked. If she wins, she can't be challenged again for a year.

Brady said that the party aimed to finish the first stage of any leadership contest — in which lawmakers vote to whittle down the field of contenders to two — before Parliament breaks for Christmas on Dec. 20. The final two contenders would then be put to the nationwide party membership in a postal ballot.

May canceled a Wednesday trip to Dublin to meet Irish Prime Minister Leo Varadkar, to stay in London and battle for lawmakers' support. She planned to address backbench lawmakers just before the leadership ballot opens.

If all Tory lawmakers cast ballots, May needs 158 votes to win, though a narrow victory could leave her weakened and under pressure to resign. But allies said May would stay in post even if she secured a wafer-thin win.

"I think she needs to win by one," said International Trade Secretary Liam Fox.

Several leading Brexiteers, including former Foreign Secretary Boris Johnson and ex-Brexit Secretary Dominic Raab, have said loudly that they think they could get a better deal with the EU, and are likely to enter a race to replace her.

Ahead of the vote, Cabinet colleagues rallied to May's support. Javid tweeted that a leadership contest, with Brexit little more than three months away, "will be seen as self-indulgent and wrong. PM has my full support and is best person to ensure we leave EU on 29 March."

Justice Secretary David Gauke said: "I think it's vital for the country that she wins tonight."

He said that if May lost, "I don't think we will be leaving the European Union on the 29th of March."

UK's May appeals to public on Brexit, braces for more blows