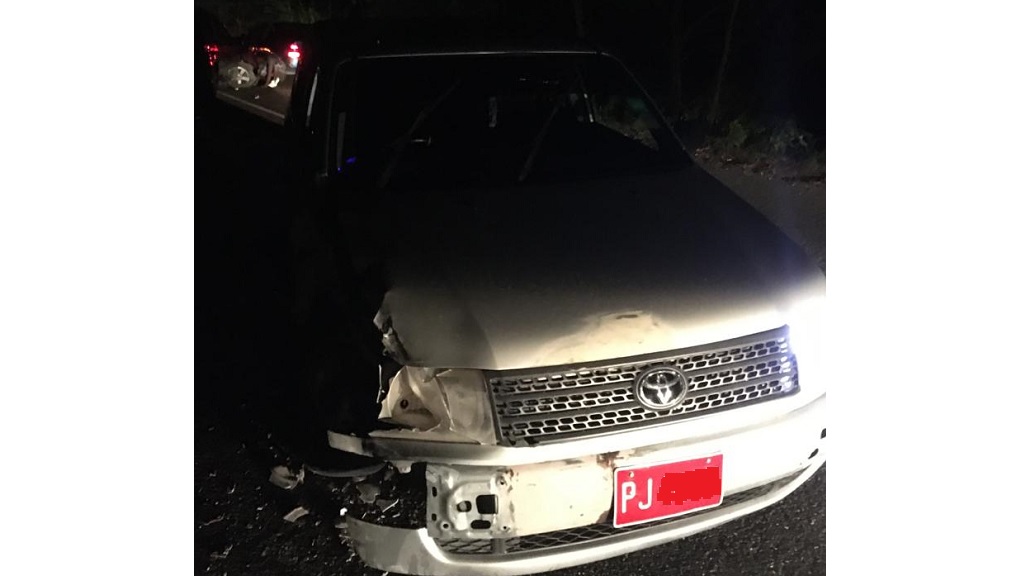 The taxi that was involved in a head-on collision in Bog Walk Gorge on Sunday.

Two persons were rushed to hospital Sunday night after the vehicle in which they were travelling was involved in a head-on collision with another motorcar in the Bog Walk Gorge.

The injured persons had been travelling in a black Nissan Lafesta about 10.15 pm when it collided with a white Toyota Probox, which was fitted with red licence plates and being operated as a taxi.

A Loop News reporter, who was travelling through the Gorge at the time, was among motorists who witnessed the accident as it unfolded.

Those who got out of their vehicles to examine the accident scene after the impact were heard commenting that it was an accident waiting to happen based on the earlier behavior of the driver leading up to the impact.

The taxi driver was first spotted overtaking other vehicles around corners in the dangerous Gorge shortly after he drove across the Flat Bridge, on his way towards Bog Walk. He continued doing so until the fateful impact.

He was in the midst of overtaking another line of vehicles around a blind corner when the impact occurred. He slammed into the Lafesta which was travelling towards Spanish Town.

The driver of the Lafesta suggested that it was his skill as a truck driver that saved the impact from being more severe.

“I come round the corner and is di Probox light mi see in front a mi. Mi haffi swing fi avoid hitting the hillside so the vehicle nuh flip and hurt mi passengers dem more than dem hurt,” he added.

However, he said his girlfriend hit her head, busted her mouth and appeared to have several teeth that were loose.

“Is two of them from my car gone to hospital,” he said.

Meanwhile, the driver of the taxi could be heard trying to defend his actions. He suggested that he was blowing his horn the whole time to alert the oncoming vehicles while he was overtaking around the corner.

But he conceded that he was at fault.

“I know the police going to give me wrong because I end up on this (the wrong) side of the road but mi did a blow mi horn the whole time,” he insisted.

There was no extensive pile-up of traffic as neither car was blocking an entire lane. However, the damage to the Lafesta was much more extensive as the entire front of the vehicle was smashed up.

The police eventually arrived on the scene about 10.50 pm and began taking statements from the respective drivers.