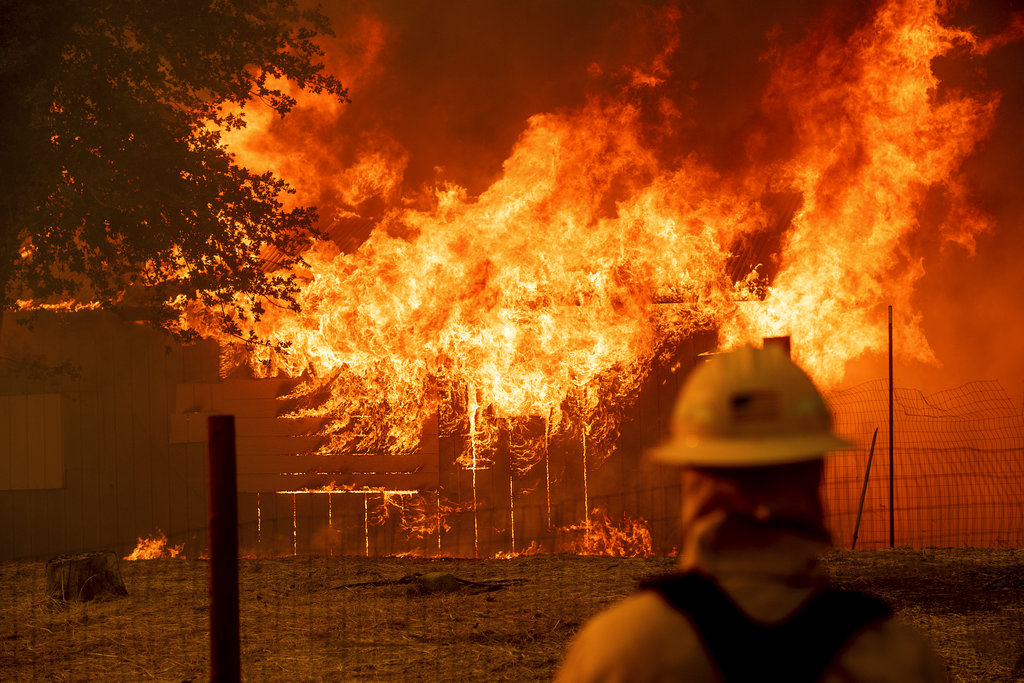 A firefighter monitors a burning outbuilding to ensure flames don't spread as the River Fire burns in Lakeport, Calif., on Monday, July 30, 2018. A pair of wildfires that prompted evacuation orders for nearly 20,000 people barreled Monday toward small lake towns in Northern California, and authorities faced questions about how quickly they warned residents about the wildfires. (AP Photo/Noah Berger)

Twin wildfires tearing through vineyards and brushy hills threatened some 10,000 homes in Northern California Tuesday — yet another front in the seemingly endless summer of wildfires that have ravaged some of the most scenic areas of the state.

The two fires straddling Mendocino and Lake counties had burned seven homes by Monday night along with some 107 square miles (277 square kilometers) of rural land.

About 100 miles (160 kilometers) north, the so-called Carr Fire that has burned more than 800 homes and killed six people has become the ninth most destructive wildfire in California history, said Scott McLean, a spokesman for the California Department of Forestry and Fire Protection.

In Lake County, evacuation orders were in effect for the 4,700-resident town of Lakeport along with some smaller communities and a section of Mendocino National Forest. In all, some 10,000 people have been warned to flee, fire officials said.

Lakeport, north of San Francisco, is the county seat and a popular destination for bass anglers and boaters on the shores of Clear Lake. But by Monday night it was a ghost town, the main streets deserted.

A few miles away embers, ash and smoke swirled through vineyards where at least one home had gone up in flames. Firefighters set blazes at the bottom of hills in order to burn up the tinder-dry brush before flames cresting the ridge tops could feed on it and surge downhill. A fleet of aircraft made continuous water and fire retardant drops on the blaze, filling the air with the roar of their engines.

But not everyone heeded orders issued Sunday and Monday to evacuate.

Derick Hughes II remained behind at his property in Nice, California, where he ran sprinklers on his roof and removed yard plants that could catch fire.

The 32-year-old Marine Corps veteran sent his wife and two daughters to safety along with three carloads of belongings. But he said he had too much at stake to leave himself. He bought his three-bedroom house last year using a loan from the Department of Veterans Affairs.

"This is everything I bled for, and I've worked really hard to get to where I am, and I'm just not willing to give it up so easily," he said over the phone. "Some people may think that's selfish of me, and I have insurance. But the way things go, I'd rather not start over."

Farther north, police said five people were arrested on suspicion of entering areas evacuated due to the explosive wildfire around Redding.

The blaze, which killed two firefighters and four civilians including two children, has now destroyed 818 homes and 311 outbuildings and damaged 165 homes, McLean said.

More than 27,000 people remained evacuated from their homes although another 10,000 were allowed to return Monday as fire crews reinforced lines on the western end of Carr Fire.

Some 12,000 firefighters were battling the blaze. Fire officials were hopeful that they could make progress containing the blaze, which was 23 percent contained.

The fire's northwestern corner continued to be active.

"It's still putting up a fight," McLean said.

Those fires were among 17 burning across the state, where fire crews were stretched to the limit.

McLean, the state fire spokesman, said there was no guarantee of safety in a state that has been ravaged by years of drought that has turned trees and brush to tinder.

"Anything could happen anywhere. That's the nature of the beast for all of these fires," he said. "The vegetation is so dry all it takes is a spark to get it going."