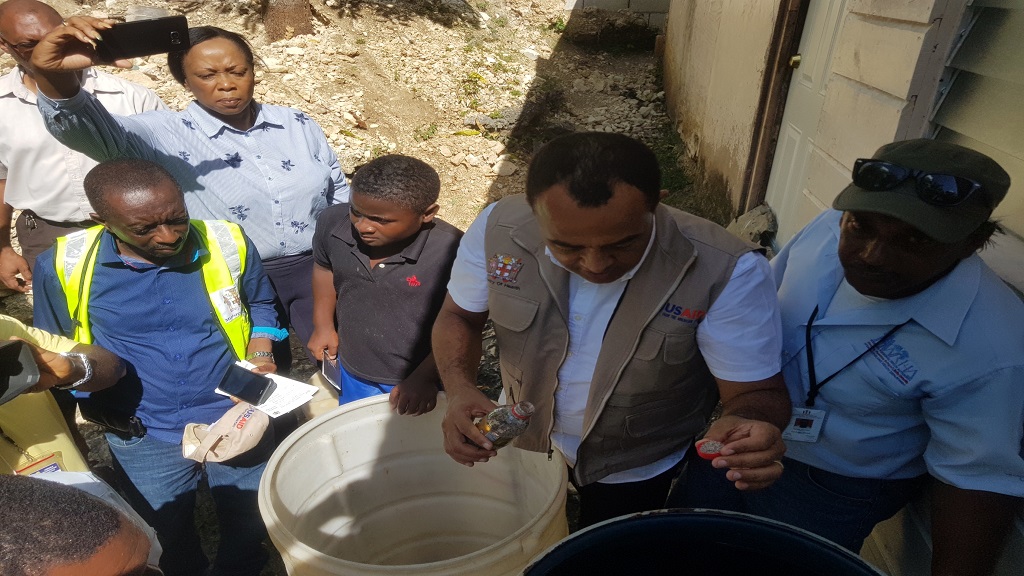 Health Minister, Dr Christopher Tufton (second right) treating stored water during a tour of Westmoreland on Friday to get a firsthand account of the parish's vector control plans in the wake of the ongoing dengue fever outbreak nationally.

Health Minister, Dr Christopher Tufton, has recommended that community members be recruited as vector control aides in areas of Westmoreland which pose the threat of violence to outsiders.

"There are some vulnerable communities where there is a little fear because of violence and because of the risk of persons not accepting them, and what I have said, (is to) recruit persons from those areas who are familiar with those communities," Dr Tufton suggested.

Westmoreland is among the parishes in which there has been evidence of an outbreak of dengue fever. The number of cases in the parish has almost tripled over the last year.

"Westmoreland is one of those parishes which has had a high level of suspected, presumed or confirmed cases of dengue. Last year they had approximately 36 (cases) falling in these categories, (but) this year, so far, they have over 100 (cases). We have seen a three-fold increase in the numbers here in the parish," the heath minister said, noting that, "We have identified the areas which are particularly vulnerable".

On Friday, Dr Tufton toured the parish to get a brief on the mosquito search and destroy efforts and education efforts there.

The health minister indicated that the Government will be increasing funding by at least $250 million for its ongoing control initiatives in the wake of the outbreak of dengue fever that the island is now experiencing.