TSA officer jumps to his death at Orlando airport 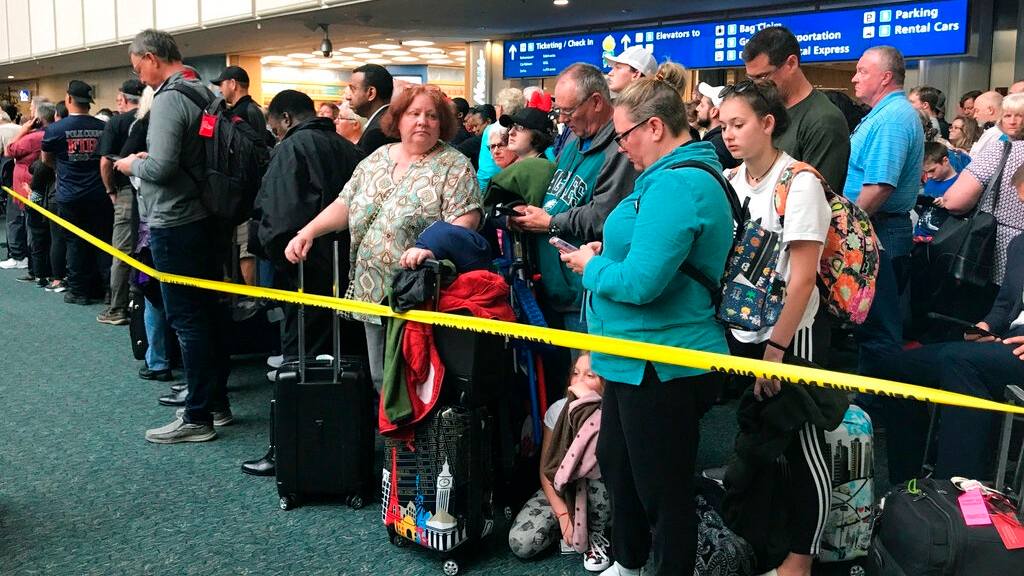 An officer from the Transportation Security Administration jumped to his death from a balcony inside Florida's busiest airport Saturday, creating panic that brought some security checkpoints to a halt for hours, grounded flights and caused serious delays.

Panicked passengers rushed past checkpoints leading to about half of the gates at Orlando International Airport after the man jumped, resulting in checkpoint closures for up to three hours and some flight cancelations.

"At no point were passengers in any danger," airport officials said in a statement.

Those affected by the stoppage included Alaska, Air Canada, Delta and Southwest airlines.

By Saturday afternoon, Southwest Airlines had cancelled 49 inbound flights and 45 outbound flights, according to the airport.

"This is a peak travel time on Saturdays and two of our busiest airlines were affected, Southwest and Delta, so a couple of thousand passengers may have been affected," Carolyn Fennell, the airport's senior director of public affairs, said in an email.

The TSA officer, in his 40s, died from an apparent suicide, according to the Orlando Police Department, which described it as an isolated incident.

"Our hearts are with the TSA family during this very difficult time," the department tweeted.

The man jumped from a hotel balcony inside the airport into the atrium where passengers wait to get through security.

The officer was pronounced dead after being taken to a hospital, according to the police.

The airport tweeted that passengers who rushed past checkpoints were returned for a second examination out of an abundance of caution. Two air side terminals were closed to passengers during a security sweep, and all flights to and from the affected gates were stopped until security measures were reinstated, according to the airport.

"We ask that you have patience with airport personnel as they work through this tragic incident," the Orlando Police Department tweeted.

Rep. Darren Soto, D-Fla. noted in a tweet that the officer's death comes after TSA employees struggled through a partial government shutdown. Along with other government workers, TSA officers worked without pay during the 35-day shutdown.

"Our @TSA Officers have already suffered so much during the #GovernmentShutdown," Soto tweeted. "This apparent suicide only adds to tragedy experienced at Orlando Int'l."

Lawmakers hopeful of agreement that would prevent shutdown