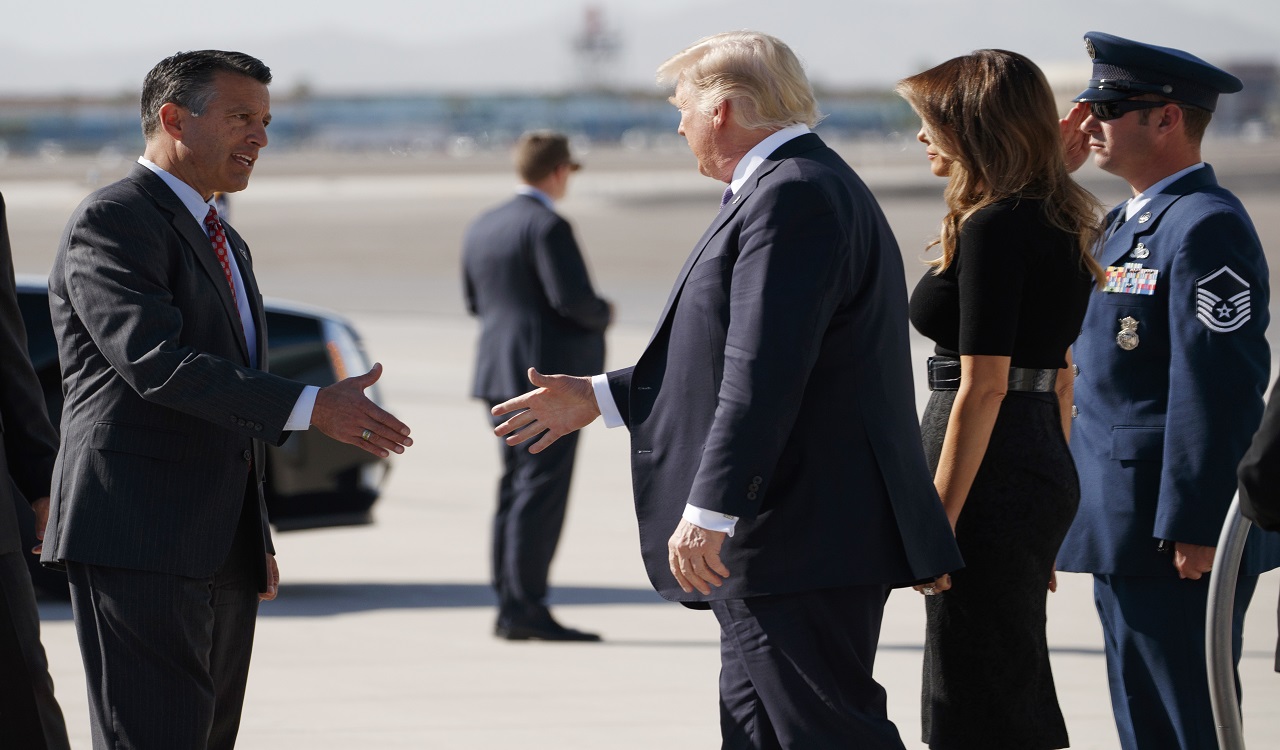 Declaring it a "very, very sad day" for himself and the nation, President Donald Trump traveled Wednesday to the city where a gunman killed 59 people at a concert.

He is meeting with survivors and law enforcement officials in the aftermath of the worst mass shooting in modern U.S. history.

Air Force One landed at the airport near the famed Las Vegas strip on a bright, sunny morning just days after a gunman on the 32nd floor of a hotel and casino opened fire on people at an outdoor country music festival below. The Sunday night rampage killed at least 59 people and injured 527, some from gunfire and some from a chaotic escape.

"It's a very sad thing. We are going to pay our respects and to see the police who have done really a fantastic job in a very short time," Trump told reporters before departing the White House. He said that authorities were "learning a lot more" about the shooter, Stephen Craig Paddock, and that more details would be "announced at an appropriate time."

"It's a very, very sad day for me personally," he said.

Trump's trip to Las Vegas follows his Tuesday travel to hurricane-ravaged Puerto Rico — a pair of back-to-back episodes that are testing his ability to unite and lift the nation in times of strife. Trump, a leader who excels at political provocation and prides himself on commanding strength, has sometimes struggled to project empathy.

During Tuesday's trip, he highlighted Puerto Rico's relatively low death toll compared with "a real catastrophe like Katrina," when as many as 1,800 people died in 2005 as levees protecting New Orleans broke. He also pointed repeatedly to praise his administration had received for its efforts, despite criticism on the island of a sluggish response.

Trump has a long personal connection to Las Vegas — a city where his name is written in huge golden letters atop his hotel. He also campaigned extensively across Nevada during his presidential campaign, drawing large crowds to rallies along the Las Vegas strip.

Trump told reporters Tuesday night that his trip would include spending time with "some of the folks that are recovering, some of the survivors," and seemed emotional as he spoke about the human toll.

"We're going to be seeing - ah it's a very, it's very, it's a very - horrible thing, even to think about. Really horrible," he said. "We're also meeting with the police, the sheriff, and we're going to spend quite a lot of time in Las Vegas."

Trump offered somber remarks about the shooting from the White House on Monday, saying "our unity cannot be shattered by evil, our bonds cannot be broken by violence."

Republicans who control Congress have made clear they have no intention of taking up gun control measures, such as tightening restrictions on semi-automatic weapons and high-capacity magazines, in the shooting's aftermath.

Trump, in a 2000 book, said that he supported a prohibition on assault weapons and a "slightly longer waiting period to purchase a gun." He also said in 2013 that he supported "background checks to weed out the sickos."

But Trump ran his campaign with a strong pro-Second Amendment message and the backing of the National Rifle Association.

"Gun and magazine bans are a total failure," read one campaign policy paper. "Opponents of gun rights try to come up with scary sounding phrases like 'assault weapons,' 'military-style weapons' and 'high capacity magazines' to confuse people. What they're really talking about are popular semi-automatic rifles and standard magazines that are owned by tens of millions of Americans."

On Tuesday, Trump appeared somewhat open to having a debate on guns, but not anytime soon.

"At some point, perhaps, that will come," he told reporters. "But that's not for now."

Las Vegas gunman's girlfriend returns to US for questioning

He 'saved my life and lost his:' Las Vegas shooting victims