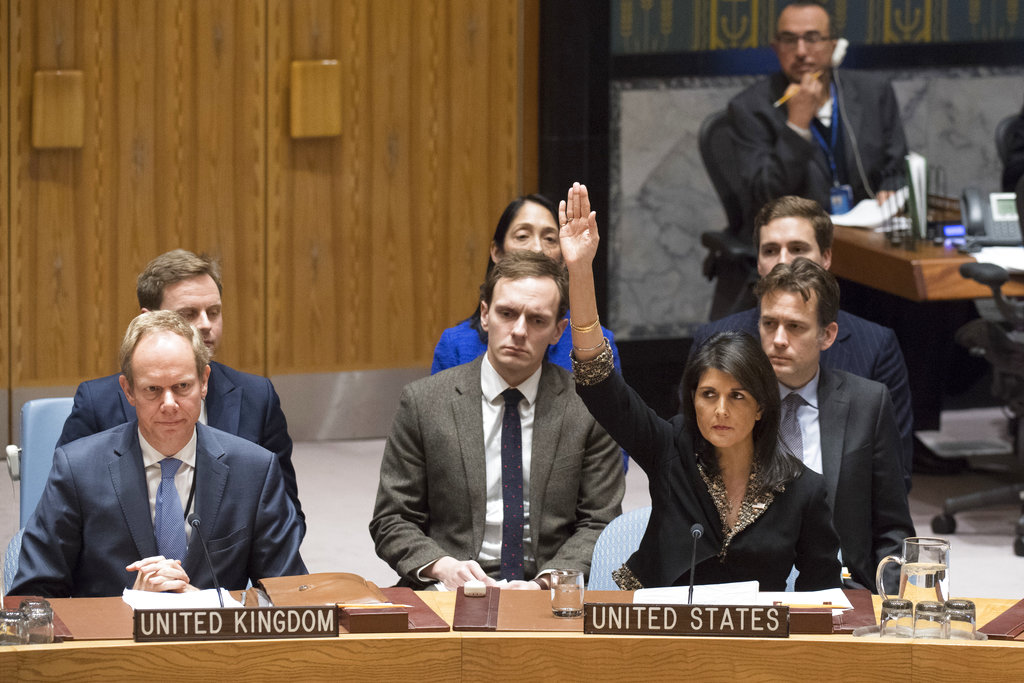 U.S. Ambassador to the United Nations Nikki Haley, right, votes against a resolution concerning Jerusalem's status at U.N. headquarters. The United States on Monday vetoed a resolution supported by the 14 other U.N. Security Council members that would have required President Donald Trump to rescind his declaration of Jerusalem as the capital of Israel, a vote that showed the depth of global opposition to the U.S. move.

President Donald Trump's threat to cut off U.S. funding to countries that oppose his decision to recognize Jerusalem as Israel's capital has raised the stakes in Thursday's U.N. vote and sparked criticism at his tactics, which one Muslim group called bullying or blackmail.

Trump went a step further than U.S. Ambassador Nikki Haley who hinted in a tweet and a letter to most of the 193 U.N. member states on Tuesday that the U.S. would retaliate against countries that vote in favor of a General Assembly resolution calling on the president to rescind his decision.

Haley said the president asked her to report back on countries "who voted against us" — and she stressed that the United States "will be taking names."

At the start of a Cabinet meeting in Washington on Wednesday, with Haley sitting nearby, Trump told reporters that Americans are tired of being taken advantage of and praised the U.S. ambassador for sending the "right message" before the vote.

Nihad Awad, national executive director of the Council on American-Islamic Relations, tweeted after Trump's comments: "Our government should not use its leadership at the UN to bully/blackmail other nations that stand for religious liberty and justice in Jerusalem. Justice is a core value of Christianity, Judaism and Islam."

The Palestinians and their Arab and Islamic supporters sought the General Assembly vote after the United States on Monday vetoed a resolution supported by the 14 other U.N. Security Council members that would have required Trump to rescind his declaration on Jerusalem as Israel's capital and not move the U.S. Embassy there.

Before Haley's letter and tweet, Palestinian U.N. Ambassador Riyad Mansour told The Associated Press he expected "massive support" for the resolution in the General Assembly.

They told reporters at Istanbul's Ataturk Airport on Wednesday before flying to New York to attend the General Assembly meeting that they believe U.N. member countries will ignore "pressure" from Haley.

Al-Maliki said he believes that countries will vote their conscience, and "they will vote for justice, and they will vote in favor of that resolution."

Ambassador Rhonda King of the tiny Caribbean nation of Saint Vincent and the Grenadines sent Haley a letter saying that her country treasures the United States "as an enduring ally" but will vote against Trump's action.

"Sometimes, friends differ; on Jerusalem, Saint Vincent and the Grenadines respectfully differs from the USA; and so, too, do many of the staunchest friends and allies of the USA," King wrote. "We gently urge yet again that the government of the USA rethink its position and approach on this entire matter."

What impact the threats from Trump and Haley will have remains to be seen.

Some diplomats predict the resolution will be supported by at least 150 countries, and possibly 180 nations.

Israel has also been conducting a global lobbying campaign against the resolution, government officials said Wednesday. The vote will show whether Israeli Prime Minister Benjamin Netanyahu has succeeded in his efforts to drum up new pockets of support in the developing world.

Netanyahu acknowledged Thursday the vote would likely pass by a wide margin but said Israel "completely rejects this vote before it is made."

Haley said in her letter, reportedly sent to over 180 countries that the Trump administration is "simply asking that you acknowledge the historical friendship, partnership, and support we have extended and respect our decision about our own embassy."

She said the U.S. Congress decided 22 years ago that Jerusalem should be recognized as the capital of Israel and Trump followed through on that decision.

Her tweet was sharper: "At the UN we're always asked to do more & give more. So, when we make a decision, at the will of the American ppl, abt where to locate OUR embassy, we don't expect those we've helped to target us. On Thurs there'll be a vote criticizing our choice. The US will be taking names."

This was not the first time that Haley threatened to keep track of U.S. opponents.

On Jan. 27, the day she arrived at the United Nations as ambassador, Haley announced a new way the United States would be doing business. The Trump administration's goal is to show U.S. strength, speak out and defend its allies — and as for countries opposing America, "We're taking names," she said.

The letter on the Jerusalem vote was the first time since then that Haley vowed to compile a list.

Her action recalled to some veteran U.N. diplomats the run-up to the Iraq war in 2002 when then U.S. President George W. Bush launched a campaign against France and other opponents of military action who refused to support a Security Council resolution to authorize war. The resolution, which former British Prime Minister Tony Blair was pressing for and the U.S. backed, was withdrawn by Britain because it was certain to be defeated as a result of strong council opposition.

The resolution being voted on Thursday is co-sponsored by Turkey, chair of the summit of the Organization of Islamic Cooperation, and Yemen, chair of the Arab Group at the U.N.

It is very similar to the defeated Security Council resolution.

The draft resolution says Jerusalem "is a final status issue" and reaffirms 10 Security Council resolutions on Jerusalem, dating back to 1967, including requirements that the city's final status must be decided in direct negotiations between Israel and the Palestinians.

It "affirms that any decisions and actions which purport to have altered, the character, status or demographic composition of the holy city of Jerusalem have no legal effect, are null and void and must be rescinded."

The draft resolution "demands that all states comply with Security Council resolutions regarding the holy city of Jerusalem, and not to recognize any actions or measures contrary to those resolutions."

Israel, US team up to block UN vote on Jerusalem