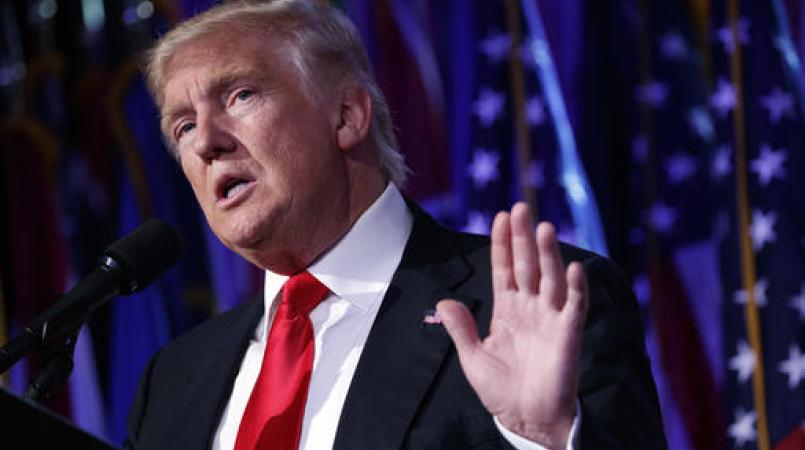 President Donald Trump pledged "strong action today" on immigration, a day after he said he wants to use the military to secure the U.S.-Mexico border until his "big, beautiful wall" is erected.

In an early-morning tweet Wednesday, Trump said "Our Border Laws are very weak" and said Democrats "stand in our way" of new laws. He added, "We will be taking strong action today."

Trump did not offer further details and the White House did not immediately respond to requests for comment.

Trump told reporters on Tuesday that he's been discussing the idea of using the military at the border with Defense Secretary Jim Mattis.

"We're going to be doing things militarily. Until we can have a wall and proper security, we're going to be guarding our border with the military," Trump said, calling the move a "big step."

It wasn't immediately clear exactly how the proposal would work or what kind of troops Trump wanted to deploy, but the White House later said Trump wanted to mobilize the National Guard.

Federal law prohibits the use of active-duty service members for law enforcement inside the U.S., unless specifically authorized by Congress. But over the past 12 years, presidents have twice sent National Guard troops to the border to bolster security and assist with surveillance and other support. The White House counsel's office has been working on the idea for several weeks, according to a senior official who spoke on condition of anonymity to discuss internal plans.

Trump has been frustrated by slow action on building a wall along the Mexican border. He's previously suggested using the Pentagon's budget to pay for the wall, arguing it is a national security priority, despite strict rules that prohibit spending that's not authorized by Congress.

At the Pentagon, officials struggled throughout the day Tuesday to answer questions about the plan, including rudimentary details on whether it would involve National Guard members.

But the administration appeared to be considering a model similar to a 2006 operation in which President George W. Bush deployed National Guard troops to the southern border.

Under Operation Jump Start, 6,000 National Guard troops were sent to assist the border patrol with non-law enforcement duties while additional border agents were hired and trained. Over two years, about 29,000 National Guard forces participated as forces rotated in and out. The Guard members were used for surveillance, communications, administrative support, intelligence, analysis and the installation of border security infrastructure.

In addition, President Barack Obama sent about 1,200 National Guard troops to the U.S.-Mexico border in 2010 to beef up efforts against drug smuggling and illegal immigration.

In addition to mobilizing the National Guard, Trump and senior officials "agreed on the need to pressure Congress to urgently pass legislation to close legal loopholes exploited by criminal trafficking, narco-terrorist and smuggling organizations," Sanders said.

Trump has been fixated on the issue since he grudgingly signed a spending bill last month that includes far less money for the wall than he'd hoped for.

The $1.3 trillion package included $1.6 billion for border wall spending — a fraction of the $25 billion Trump made a last-minute push to secure. And much of that money can be used only to repair existing segments, not to build new sections.

Trump spent the first months of his presidency bragging about a dramatic drop in illegal border crossings. Indeed, the 2017 fiscal year marked a 45-year low for Border Patrol arrests. But the numbers have been slowly ticking up since last April and are now on par with many months of the Obama administration. Statistics show 36,695 arrests of people trying to cross the southwest border in February 2018, up from 23,555 in the same month of the previous year.

At last week's meeting, Trump "directed a vigorous administrative strategy to confront this threat and protect America's national security," said Sanders. Tuesday's briefing was a follow-up to discuss the plans.

Trump appeared to claim credit Tuesday for halting a caravan of about 1,100 migrants, many from Honduras, who had been marching along roadsides and train tracks in the southern Mexican state of Oaxaca.

"I said (to Mexican officials), 'I hope you're going to tell that caravan not to get up to the border.' And I think they're doing that because, as of 12 minutes ago, it was all being broken up," he said.

But the caravan of largely Central American migrants had never intended to reach the U.S. border, according to organizer Irineo Mujica. It was meant to end at a migrants' rights symposium in central Mexico later this week.

The caravan stopped to camp at a sports field in Oaxaca over the weekend. Mexican immigration officers have been signing them up for temporary transit visas, which would allow them to travel to the U.S. border, possibly to seek asylum, or to seek asylum status in Mexico.

Trump calls for 'Merit Based immigration'