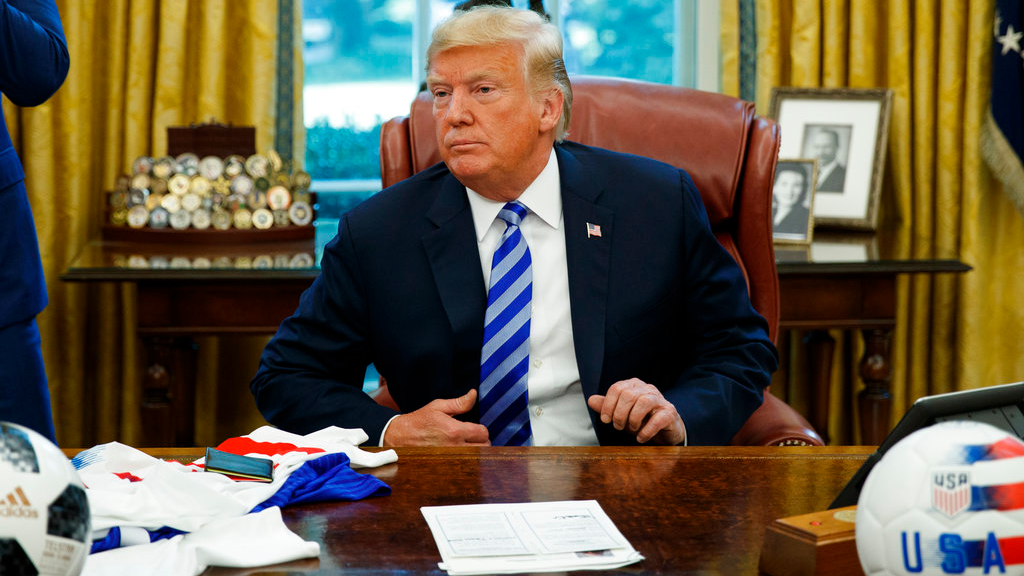 President Donald Trump said that there's no reason to spend a lot of money on military wargames with South Korea, but he warned he could "instantly" relaunch the exercises again and they would be "far bigger than ever before."

Trump made the comment Wednesday in a series of tweets that primarily took aim at China, blaming it for lack of progress on getting North Korea to end its nuclear program, following the president's landmark summit with Kim Jong Un in June.

But there was also a loaded message for Kim: mixing an expression of goodwill to the North Korean autocrat with an implicit military threat that will add to speculation over the direction of Trump's attempted rapprochement with a longtime adversary.

"The president believes that his relationship with Kim Jong Un is a very good and warm one, and there is no reason at this time to be spending large amounts of money on joint U.S.-South Korea war games," Trump said, citing what was presented as a White House statement. "Besides, the president can instantly start the joint exercises again with South Korea, and Japan, if he so chooses. If he does, they will be far bigger than ever before."

Trump caught military leaders by surprise in June when he announced the suspension with the South, "unless and until we see the future negotiation is not going along like it should." He called the drills costly and provocative.

The cancellation was an olive branch to Pyongyang, which has long complained that the exercises were invasion preparations. Often the North has reacted to the exercises with its own demonstrations of military might, including firing a new intermediate-range missile over Japan last year as a countermeasure to the drills.

There was some hope that the gesture of shelving the fall exercises would foster goodwill and help nudge the North in the denuclearization talks. But beyond returning the potential remains of about 55 U.S. troops missing from the Korean War, and its continuing suspension in its missile and nuclear tests, there has been little movement from the North.

As a result, the U.S. last week shelved a planned trip to Pyongyang by Secretary of State Mike Pompeo, citing lack of progress on denuclearization, but remaining open to future talks.

As doubts grow in Washington and beyond over Kim's willingness to relinquish his nukes, Trump has been heaping blame on China, which is North Korea's traditional ally and main trading partner. On Wednesday the president accused Beijing of pressuring the North because of current tensions in U.S.-China trade relations, and also of providing North Korea money, fuel, fertilizer and other commodities, which he said was not helpful.

China cooperated with the U.S. last year in adopting tough international sanctions against North Korea and maintains it is still enforcing the restrictions adopted by the U.N. Security Council.

But in his tweets, Trump also signaled that the U.S. has its own military means of exerting pressure on Pyongyang. His remarks compounded confusing messages from the Pentagon over the past two days that have revived speculation over the drills.

On Tuesday, Defense Secretary Jim Mattis told reporters the U.S. might carry out drills with South Korea next spring after having cancelled a major exercise this summer. He said no decision has been made on when to resume military exercises, but his statements suggested the recent cancellation might not be repeated.

Several U.S. officials acknowledged Wednesday that planning is going forward for the spring exercises, which require months of preparation.

"Routine planning continues for major U.S.-ROK exercises on the peninsula in accordance with the normal exercise program planning cycle," said Air Force Col. Patrick Ryder, spokesman for the Joint Chiefs of Staff, referring to the acronym for South's official name, the Republic of Korea.

Other U.S. officials also said preliminary work on the drills has begun, noting that it is much easier to cancel an exercise than it is to slap one together quickly. The officials spoke on condition of anonymity to discuss internal conversations.

David Maxwell, a senior fellow at the Washington-based Foundation for Defense of Democracies, said the initial planning for the exercises can begin a year in advance, including the funding, scheduling and movement of forces and units that will participate. As time goes on, planners would nail down the war game scenario and other details.

"We continue to plan for exercises, but we can stop them on a dime," said Maxwell, a retired Army colonel who served five tours in Korea. "We can't restart them on a dime."

He said the risk of a continued halt in the major drills would be a diminishing of skills and institutional memory between South Korean forces and the more than 28,000 U.S. troops based there. "The longer we go without exercises, the more risk there is that we will suffer significant challenges if there is a war," Maxwell said.

A key challenge in Korea is that the bulk of the U.S. forces deploy for just a year, so they rely on the summer exercise to get familiar with the South Korean military and the ways allied troops coordinate and operate with them. The spring Foal Eagle drill is more expansive and includes fighter jets, maritime maneuvers, amphibious assault tactics and computer-simulated scenarios.