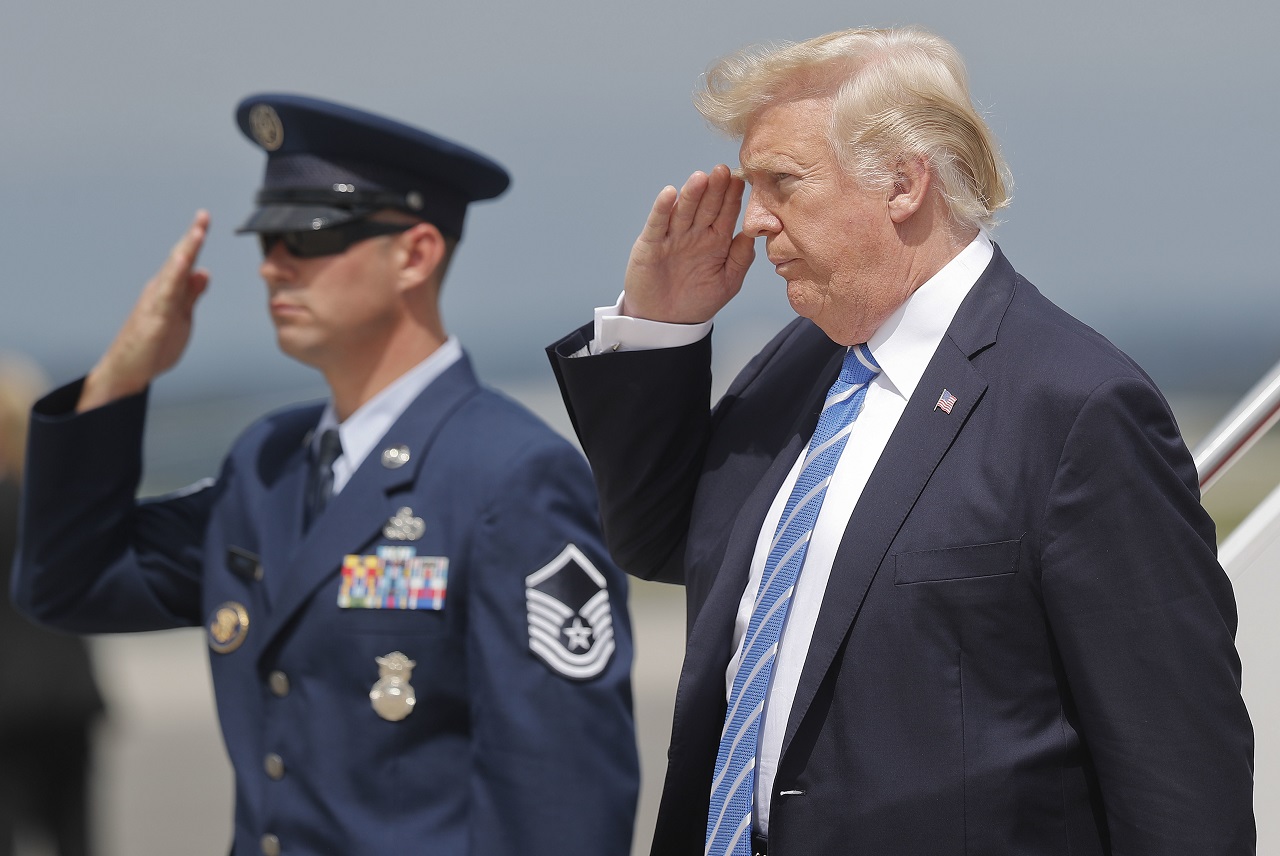 President Donald Trump returns a salute upon his arrival at Hagerstown Regional Airport in Hagerstown, Md., on Air Force One, Friday, Aug. 18, 2017, en route to nearby Camp David, for a meeting with his national security team to discuss strategy for South Asia, including India, Pakistan and the way forward in Afghanistan.

President Donald Trump huddled with his top national security aides in the seclusion of Camp David on Friday, trying to formulate a winning Afghanistan strategy after 16 frustrating years of war.

The officials and Trump weighed options for breaking a prolonged stalemate in the fight against a Taliban insurgency. There was no immediate word from the White House whether Trump settled on a single course of action or asked for more deliberations. Afterward the president returned to his golf club in Bedminster, New Jersey.

The administration has struggled for months to formulate a new approach to the war. But stepping up the fight in a way that advances peace prospects may be even more difficult, in part because the Taliban has been gaining ground and shown no interest in peace negotiations.

Trump met with Secretary of State Rex Tillerson, Defense Secretary Jim Mattis, top intelligence agency officials and other top military and diplomatic aides at the presidential retreat in nearby Maryland. Mattis said earlier this week the administration was "very close" to finalizing a new approach.

The meeting participants did not include Steve Bannon, the Trump strategist who has clashed with other members of the national security team over how to proceed in Afghanistan.

His resignation was announced at midday. Also excluded: Gen. Joseph Votel, the Central Command chief who is responsible for U.S. military operations in the greater Middle East, including Afghanistan. Votel told reporters traveling with him in the region this week that Mattis and Gen. Joseph Dunford, the Joint Chiefs chairman, represent him in the White House-led Afghanistan strategy review. Votel said he has not talked directly to Trump as part of the months-long review.

By retreating to the seclusion of Camp David in Maryland's Catoctin Mountains, Trump was taking an opportunity to regroup after a politically bruising week of criticism of his response to the deadly protests in Charlottesville, Virginia.

Solutions for Afghanistan, the longest war in American history, eluded the Obama administration and haven't come easily to Trump, who said almost nothing about the conflict during his presidential campaign. Since taking office, he has considered options ranging from walking away from the war to sending in additional troops. Abandoning Afghanistan is seen as unlikely in light of U.S. concerns about countering terrorism.

In remarks at the State Department on Thursday, Mattis told reporters the Camp David talks "will move this toward a decision."

"We are coming very close to a decision, and I anticipate it in the very near future," he added.

Months ago the Pentagon settled on a plan to send about 3,800 additional troops to strengthen the Afghan army, which is stuck in what some call a deteriorating situation with the Taliban insurgency. Within in the White House, questions persist about the wisdom of investing further resources in the war. Even if the administration decides to add more troops, it's unclear whether they could get there quickly enough to make a difference in the current Afghan fighting season, which winds down in autumn.

The administration has said its Afghanistan strategy will be informed by a review of its approach to the broader region, including Pakistan and India. The Taliban have long used Pakistan as a sanctuary, complicating efforts to defeat the insurgency in Afghanistan and stabilize the country. The region includes other actors who pose political problems for Washington, including Iran, which has influence in western Afghanistan.

The outlook is clouded by the Afghan government's struggle to halt Taliban advances on its own. The U.S. Special Inspector General for Afghanistan Reconstruction has said the Taliban hold sway in almost half the country.

Government forces also are battling an Islamic State affiliate that has carved out a foothold mostly in the east. Trump has vowed to crush IS, so its expansion in Afghanistan poses an additional challenge with no immediate solution. Just this week, a U.S. soldier was killed and nearly a dozen were wounded in combat with IS fighters.

The U.S. has about 8,400 troops in Afghanistan. Their primary roles are to train and advise Afghan forces and to hunt down and kill members of al-Qaida and other extremist groups.

Trump has expressed frustration at the prolonged fighting in Afghanistan. Earlier this summer he raised the idea of firing the top U.S. commander there, Gen. John Nicholson.

Asked this week if Trump has confidence in Nicholson, Mattis demurred. "Ask the president," he answered.

Trump is "looking at all aspects" of U.S. involvement in Afghanistan "as he must in his responsibilities as the commander in chief," Mattis said.

Nicholson was not participating in Friday's talks at Camp David.

Lawmakers in Congress also are frustrated by the war and the prolonged debate within the administration on how to break the stalemate. Last week, Republican Sen. John McCain declared that "America is adrift in Afghanistan." He proposed a war strategy that would expand the U.S. counterterrorism effort and provide greater support to Afghan security forces.

McCain said bluntly, "We are losing in Afghanistan, and time is of the essence if we intend to turn the tide."

About 4,000 more US troops to go to Afghanistan