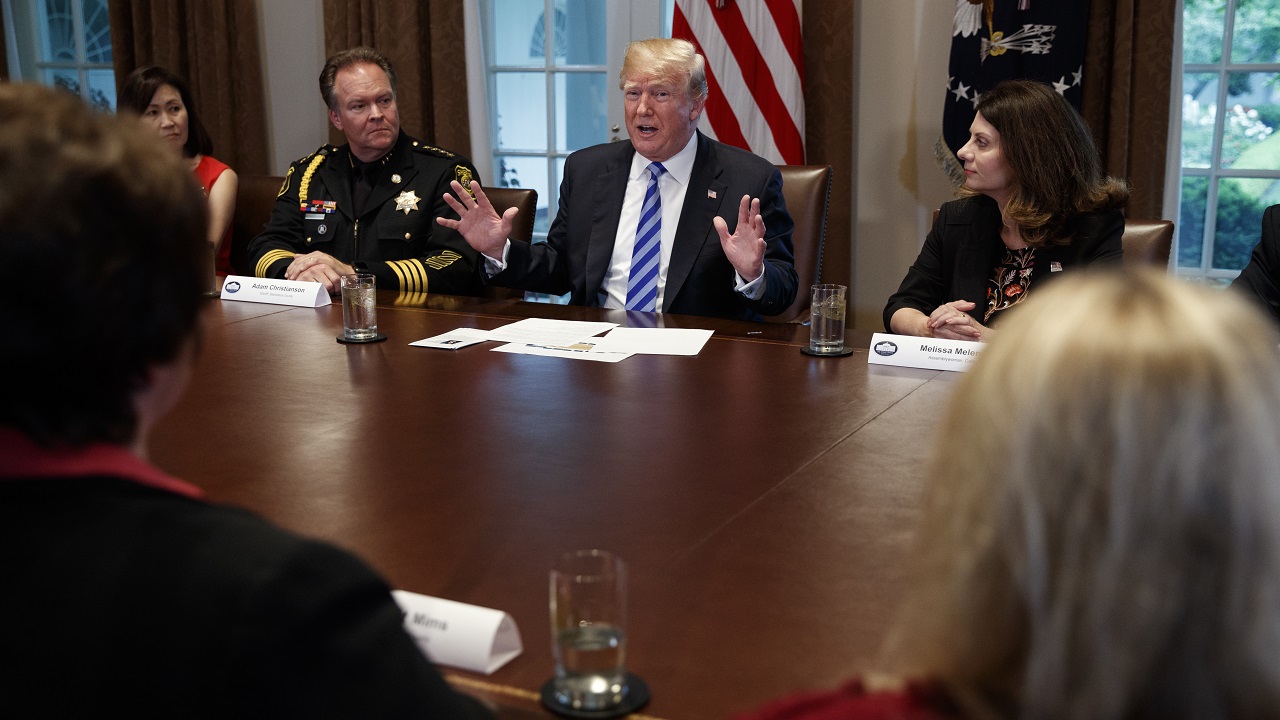 While railing against California for its so-called sanctuary immigration policies, President Donald Trump referred to some people who cross the border illegally as "animals" — drawing a sharp rebuke from Democratic leaders for the harsh rhetoric.

Trump's remark at meeting with local leaders was in response to a complaint about gang members.

"We have people coming into the country, or trying to come in - and we're stopping a lot of them," Trump said during the immigration round table after a sheriff commented about gangs. "You wouldn't believe how bad these people are. These aren't people. These are animals."

Senate Minority Leader Democrat Chuck Schumer responded on Twitter to the president, saying: "When all of our great-great-grandparents came to America they weren't 'animals’, and these people aren't either."

Trump was joined at the Wednesday White House meeting by mayors, sheriffs and other local leaders from California who oppose the state's immigration policies and who applauded his administration's hard-line efforts.

"This is your Republican resistance right here against what they're doing in California," said Assemblywoman Melissa Melendez, co-opting a term used by Democrats opposed to Trump's presidency. She, like others, said the president and his policies were far more popular in the state than people realise.

They were criticising legislation Governor Jerry Brown signed into law last year that bars police from asking people about their immigration status or helping federal agents with immigration enforcement. Jail officials can transfer inmates to federal immigration authorities if they have been convicted of one of about 800 crimes, mostly felonies, but not for minor offenses.

Brown insists the legislation, which took effect on January 1, doesn't prevent federal immigration officials from doing their jobs. But the Trump administration has sued to reverse it, calling the policies unconstitutional and dangerous. Some counties, including San Diego and Orange, have voted to support the lawsuit or have passed their own anti-sanctuary resolutions.

Republicans see backlash to the law as a potentially galvanising issue during the midterm elections, especially with Trump's anti-immigrant base. And Trump has held numerous events in recent months during which he's drawn attention to California's policies.

During the session, Trump thanked the officials, saying they had "bravely resisted California's deadly and unconstitutional sanctuary state laws". He claimed those laws are forcing "the release of illegal immigrant criminals, drug dealers, gang members and violent predators into your communities" and providing "safe harbour to some of the most vicious and violent offenders on Earth".

Brown responded on Twitter, writing that Trump "is lying on immigration, lying about crime and lying about the laws of CA".

The Democratic governor added: "Flying in a dozen Republican politicians to flatter him and praise his reckless policies changes nothing. We, the citizens of the fifth largest economy in the world, are not impressed."