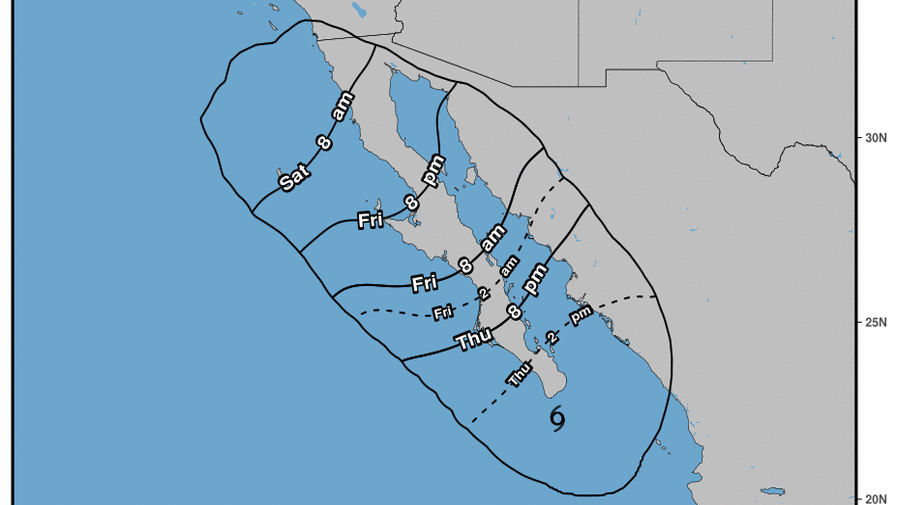 About 1,400 people sought refuge in storm shelters in the Los Cabos resorts at the tip of the Baja California Peninsula Thursday as Tropical Storm Lidia gained strength and closed in on an area just north of the resorts.

Lidia spread rains over a broad swath of Mexico, including Mexico City, where it was blamed for flooding that briefly closed the city's airport.

The U.S. National Hurricane Center said Lidia could produce total accumulations of as much as 8 to 12 inches (20 to 30 centimeters) across much of Baja California Sur state and western Jalisco state on the mainland, threatening flash floods and landslides.

Lidia's maximum sustained winds rose to 65 mph (105 kph) at midday and some strengthening was possible before landfall expected later in the day. Its center was about 25 miles (40 kilometers) south of Cabo San Lucas and heading north-northwest at 9 mph (15 kph).

Far out over the Atlantic, meanwhile, Hurricane Irma formed while following a course that could bring it near the eastern Caribbean Sea as a Category 4 storm by early next week. Its maximum sustained winds had increased to near 100 mph (155 kph).

Irma was moving west-northwest near 10 mph (17 kph) and that general motion was forecast to continue through early Friday.

Forecasters said Irma likely would become a major hurricane by Thursday night and was expected to be an extremely dangerous hurricane for the next several days.

No coastal watches or warnings were in effect.

The Latest: Harvey downgraded to a Tropical Storm